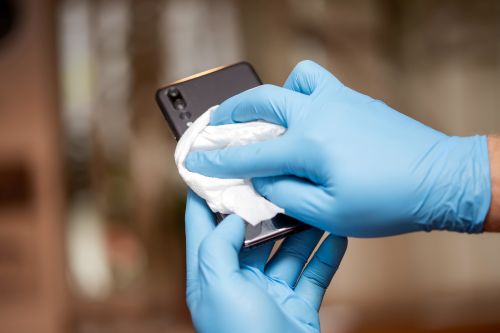 A new study by UC Davis researchers confirms the low likelihood that SARS-CoV-2 contamination on hospital surfaces is infectious. The study, published June 24 in PLOS ONE, is the original report on recovering near-complete SARS-CoV-2 genome sequences directly from surface swabs.

"Our team was the first to demonstrate that SARS-CoV-2 virus sequences could be identified from environmental swabs collected from hospital surfaces," said Angela Haczku, a respiratory immunologist and senior author on the study.

In April 2020, a COVID-19 outbreak among hospital staff led an interdisciplinary team of UC Davis researchers to investigate if there was virus contamination of frequently used surfaces in patient serving ICU and staff meeting areas at the UC Davis Medical Center. At that time the role of fomites (surfaces) in spreading the disease was highly debated. They collected multiple samples during the first (April 2020) and the second (August 2020) waves of COVID-19 from surfaces and HVAC filters in the hospital.

The researchers analyzed the surface swabs for SARS-CoV-2 RNA and infectivity and assessed the suitability of the RNA for sequencing.

Despite a significant increase in the number of hospital patients with COVID-19 during the second surge, the team found that only 2% of swabs tested positive in August, compared to 11% of samples collected in April.

"The reduction in the virus contamination was likely due to improved ICU patient management and cleaning protocols," said Haczku, a professor of medicine, director at the UC Davis Lung Center and associate dean for translational research at the UC Davis School of Medicine.

The study demonstrated that by genome sequencing, SARS-CoV-2 could be detected even from samples that otherwise tested negative (undetectable) by commonly used PCR tests. The results also confirmed that the SARS-CoV-2 RNA picked up from a surface, although containing near- intact genomic sequence, was not infectious. This finding supports the hypothesis that contaminated surfaces may not be a major way for spreading COVID-19 disease.

"For the first time, to our knowledge, we were able to determine the viral genome sequence from surface swab samples obtained in a hospital environment," said David Coil, project scientist at the UC Davis Genome Center and the first author on the study. "We found SARS-CoV-2 in samples that were tested negative by RT-PCR, suggesting that the sequencing technology is superior for virus detection in environmental samples."

According to Coil, the genome sequencing performed on the hospital surface swab samples is very important. By getting accurate viral genomic sequences, the researchers could track the source and figure out how an infection moves.

"Our data indicated that the sequences determined for the viral RNA from surfaces were identical to the ones derived from the patients hospitalized in the ICU at the time of sample collection. The ability to identify viral genome sequences from environmental samples may have high public health significance in outbreak surveillance and monitoring the spread of new viral variants," Haczku said.

This study was funded by a UC Davis CRAFT Award and The Chester Robbins Endowment.