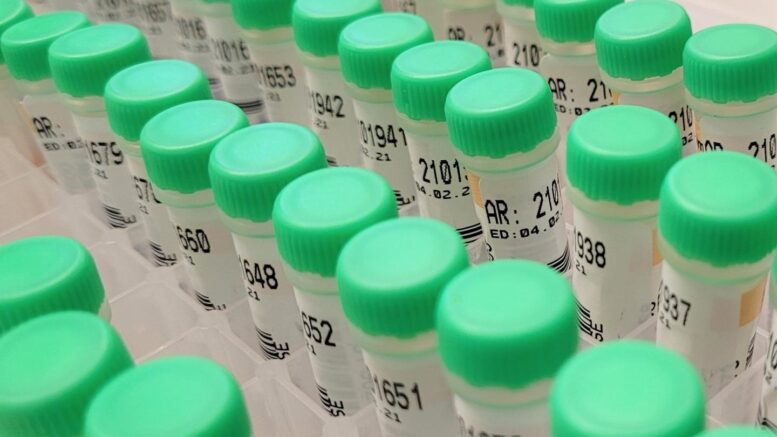 The team of researchers determined the viral load for more than 25,000 COVID-19 patients. Courtesy of Charité/Victor Corman

What started as the preliminary analysis of routine laboratory data has since evolved into the largest-ever study of viral load levels in patients with SARS-CoV-2. A team of researchers from Charité - Universitätsmedizin Berlin have now analyzed the PCR samples of more than 25,000 persons with COVID-19. Working under the leadership of Prof. Dr. Christian Drosten, the team determined the viral loads of each individual sample and used their results to estimate levels of infectiousness. The research, which has been published in Science*, provides a clear idea of the infectiousness of the disease in different age groups and at different levels of disease severity. It also provides new insights into the B.1.1.7 variant.

According to the reproductive number (R 0), a person infected with SARS-CoV-2 will, on average, transmit their infection to three to five other people. While it is a useful metric in an epidemiological setting, 'R 0' does not lend itself to estimating the risk of transmission at the individual or group level. Once normal social and environmental factors are removed from the equation, individuals can differ markedly in terms of their infectiousness and the length of time during which they actively shed the virus.

To better understand and estimate infectiousness in specific groups of individuals, a team led by Prof. Dr. Christian Drosten, Director of Charité's Institute of Virology and a researcher at the German Center for Infection Research (DZIF), analyzed the PCR samples of more than 25,000 COVID-19 cases in order to determine their 'viral loads'. A sample's viral load - the total number of copies of the SARS-CoV-2 genome contained in the sample - provides a rough estimate of the quantity of virus present in a patient's throat and, as such, is a useful metric for estimating an individual's infectiousness. To further improve their estimates, the researchers also applied findings regarding the minimum viral load threshold typically required for the successful isolation of SARS-CoV-2 in cell culture (where isolation indicates the presence of infectious virus). Sequential samples were available for more than 4,300 of the cases studied. Using these to track throat viral load data over time, the researchers were able to model the typical development of viral loads over the course of the infection. The researchers then looked for significant differences in their data, specifically in relation to different age groups, disease severity and virus variants.

No notable differences in viral load levels were recorded among SARS-CoV-2-positive individuals aged between 20 and 65 years, the average throat swab sample containing approximately 2.5 million copies of the SARS-CoV-2 genome. Viral loads were found to be lowest in very young children (0 to 5 years). Levels started at approximately 800,000 copies of the viral genome, increased with age, and approached adult levels in older children and adolescents.

"While these numbers look very different at first glance, it is crucial to remember that viral load results are shown on a logarithmic scale," says Drosten. "The differences in viral loads found in the youngest children are, in fact, barely below the threshold at which we would normally consider them clinically relevant. Crucially, one also has to understand how we arrive at these values and take this into account when interpreting them." Highlighting the differences in the methodology of sample collection between children and adults, the virologist adds: "Children's swabs are significantly smaller in size and collect less than half the sample quantity normally available for PCR testing. Moreover, the level of discomfort involved with the procedure means that deep nasopharyngeal swabs are often replaced with simple throat swabs. This of course further reduces the amount of viral material collected. For this reason, we fully expect that, in children, the same level of viral replication will produce lower viral load results during PCR testing."

When comparing peak viral loads in laboratory samples, the researchers estimated levels of infectivity in the youngest children (0 to 5 years) to be at approximately 80 percent of that found in adults. As previously, values for school-aged children and adolescents were found to be approaching adult values. "This shows that viral loads are not directly proportional to infectivity and cannot be converted directly," explains Drosten. He adds: "Even these data-based estimates of infectivity have to be corrected upwards because of the different methods of sample collection used in children. All of this forms part of a clinical virologist's overall assessment. My initial assumption, that all age groups have roughly the same level of infectivity, has been confirmed, both by this and by other studies."

A symptom-based comparison confirmed observations previously made in COVID-19 cases, namely that even asymptomatic individuals can have very high viral loads. Individuals who required hospitalization were found to have higher viral loads than others over the entire course of the disease. Based on their new models of viral load courses over time, the researchers estimate that individuals infected with SARS-CoV-2 reach peak viral load levels in their throats as early as 1 to 3 days before the onset of symptoms.

Approximately 9 percent of the COVID-19 cases tested showed extremely high viral loads of one billion copies per sample or higher. More than a third of these potentially highly infectious individuals had either no symptoms or only mild symptoms. "These data provide a virological foundation for the notion that a minority of infected individuals cause the majority of all transmissions," explains Drosten. He adds: "The fact that this includes so many people without any relevant symptoms underlines the importance of pandemic control measures such as social distancing and mandatory mask-wearing."

In samples collected from individuals infected with the B.1.1.7 ('UK' or 'British') variant, average viral loads were found to be increased by a factor of ten, while laboratory-based estimates of infectivity were increased by a factor of 2.6. To arrive at these data, the researchers took viral load data from approximately 1,500 cases infected with B.1.1.7 and compared them with data from approximately 1,000 people infected with other variants who had been tested at the same testing centers, outpatient departments and clinical wards around the same time. Drosten adds: "Laboratory studies may not as yet be in a position to provide a definitive explanation, but one thing is clear: B.1.1.7 is more infectious than other variants."

The researchers plan to continue their work on viral loads throughout the course of the pandemic. They hope to gain insights into the changes which occur as new variants arise as the virus adapts to increasing levels of population immunity.