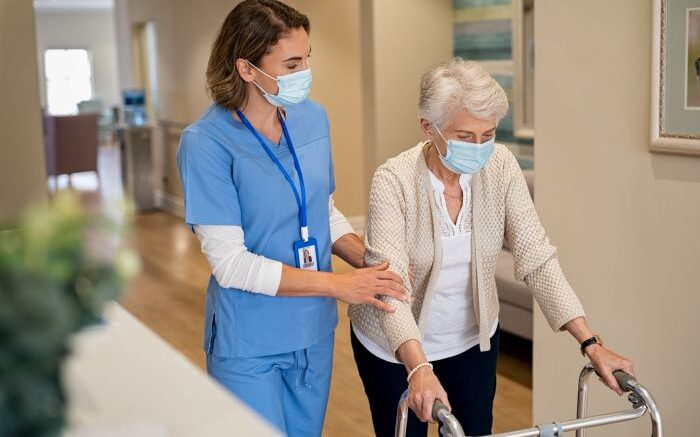 New research from the Case Western Reserve University School of Medicine in partnership with Brown University shows that high levels of Omicron-specific immunity can be achieved in nursing home residents and their caregivers with a third dose of the COVID-19 vaccine, also known as the booster shot. The findings were published this month in the journal eBioMedicine.

Researchers examined blood samples from 85 nursing home residents and 48 healthcare workers in Ohio who received the COVID-19 vaccine booster to determine the level of neutralizing antibodies present. Neutralizing antibodies are protective proteins produced by the immune system in response to vaccination and can be analyzed to determine the length of time it takes for immunity to diminish.

The study found that Omicron-specific antibodies reached detectable levels in 86% of nursing home residents and 93% of healthcare workers after receiving the booster shot, compared to just 28% of nursing home residents and healthcare workers after the initial two-dose COVID-19 vaccine series. This high neutralization level occurred two weeks after the booster.

Despite nursing homes acting as an epicenter of infections and deaths throughout the pandemic, one in eight nursing home residents and 1 in 9 staff members have not been fully vaccinated, according to the AARP.

David Canaday, lead study author and professor at the School of Medicine, said the results highlight the importance of booster vaccinations–not only for nursing home residents, but also for the general population.

“There are tens of millions of community-dwelling older adults similar to the nursing home population but are living at home,” he said. “This data shows this group of frail, older adults with similar clinical and functional limitations would benefit immensely from a booster vaccination. The data also shows that healthcare workers achieved a significant elevation in antibody levels after receiving a booster. Many of these workers are healthy, middle-aged adults similar to the general population.”

The research builds on a previous study that showed nursing home residents and healthcare workers lose more than 80% of their COVID-19 immunity six months after the initial vaccine series. Those results were presented to the CDC and published last fall.

The CDC recommends a first booster dose for people age 5 and older after completing their primary COVID-19 series. A second booster shot is recommended for people at least 50 years old and for those at least age 12 who are moderately or severely immunocompromised. Canaday’s research team has ongoing studies examining the responses to the second booster including nursing home residents.

In addition to Case Western Reserve and Brown University, the research team included collaboration with the Louis Stokes Cleveland VA Medical Center; Ragon Institute at the Massachusetts Institute of Technology; the Marcus Institute for Aging Research; and the Providence Veterans Administration Medical Center.