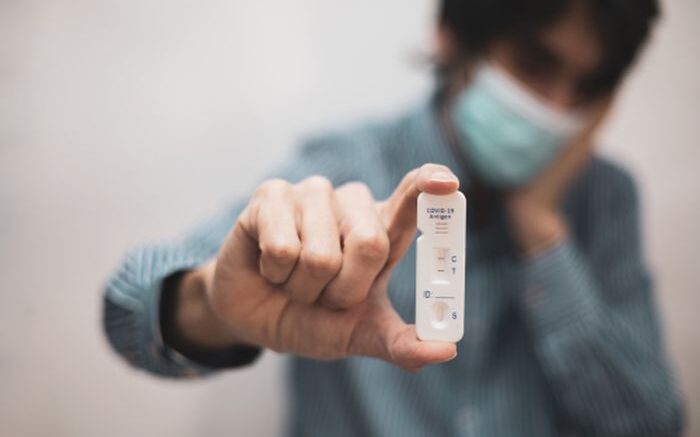 The performance of some home testing kits for covid-19 appears to have declined as the omicron variant emerged, suggests a study published by The BMJ today.

The findings, based on three widely used rapid antigen tests, show that performance improved when tests used both nose and throat samples compared with nasal samples only.

Rapid antigen tests were first introduced for use by trained professionals, but are now widely available for people to test themselves and get a result quickly, at their own convenience.

This ‘self-testing’ approach could support early detection and self-isolation of infectious people and reduce community transmission. But there is a lack of real world evidence on the performance of nose and throat self-sampling during the omicron variant period.

All participants had a reference (PCR) test taken by a trained member of staff and were asked to complete a rapid antigen test at home as soon as possible, and within three hours of their test site visit, followed by an online questionnaire.

The researchers found that the sensitivities of the three tests performed with nasal self-sampling decreased during the emergence of omicron, from 87% to 81% for Flowflex, 83% to 76% for MPBio, and 80% to 67% for Clinitest. However, the observed decline was only statistically significant for Clinitest.

When a throat test was added to a nasal test, this improved the sensitivity of MPBio from 70% to 83% and Clinitest from 70% to 77% (but was not done for Flowflex), most notably in individuals who visited the test site for reasons other than to confirm a positive self-test result.

Only the MPBio test with combined throat and nasal self-sampling met the World Health Organization’s standards for rapid antigen tests among individuals with symptoms.

Also, there were slight differences in sampling methods for the reference (PCR) test, which might have influenced the results of the study.

However, the authors point out that the omicron variant was present in at least 90% of samples in both periods and therefore do not expect that the sampling method of the reference test substantially impacted their results or their generalisability.

Based on these findings, they say people with covid-19 symptoms can rely on a positive rapid antigen test result irrespective of SARS-CoV-2 variant dominance or method of self-sampling, while individuals with a negative self-test result should adhere to general preventive measures because a false negative result cannot be ruled out.

What should we take from this study, ask Timothy Feeney, research editor at The BMJ, and Charles Poole at the University of North Carolina, in an accompanying editorial? "Firstly, that members of the general public are capable of doing their own nasal (and potentially oropharyngeal) sampling for covid-19 testing, but the real world performance of antigen tests remains highly variable. Secondly, adding oropharyngeal testing may provide some benefit, although it is unclear how many test kits are capable of expanded use, and serial testing could be a more workable change to testing protocols."

Finally, and most importantly, are the policy implications. "In the UK and the U.S., policies governing use of tests to enable a return to normal activities are confusing, poorly explained, and frequently change."

He told the BMJ: "Given the less than ideal performance of antigen tests, updates to guidance in the public and private sector should take this into account when suggesting action based on test results.”