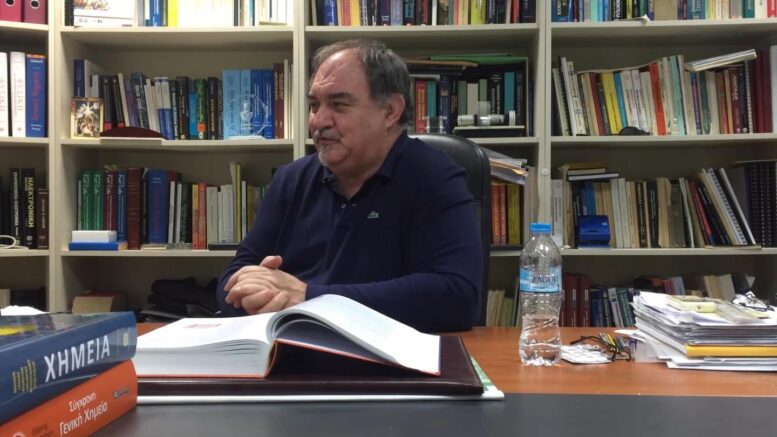 Currently, SARS-CoV-2 can be diagnosed in two different ways: i) antigen tests (point-of-care, POC) and ii) molecular tests (nucleic acid, RNA, or PCR-polymerase chain reaction). Antigen tests can detect parts of SARS-CoV-2 proteins, known as antigens, via a nasopharyngeal or nasal swab sampling method. The main advantages of POC-test include the high specificity, quick response (less than an hour), and portability, with no need of fixed laboratory facilities. On the other hand, in a molecular diagnostic test, a reverse transcriptase polymerase chain reaction (RT-PCR) is evolved, also known as nucleic acid amplification method, which requires expensive laboratory equipment, hours of analysis, and special staff.

Despite the great efforts of the scientific community toward the development of diagnostic tools and the achievement of high specificity and sensitivity of the molecular tests, the concern about the control and detection of the SARS-CoV-2 remains.

Professor Panagiotis Tsiakaras from Ural Federal University, with his colleagues in international research groups, focused on reviewing the materials used for the design and development of electrochemical biosensors for the SARS-CoV-2 detection, highlighting the significant role the electrochemistry could play in controlling COVID disease. This kind of biosensors could be a successful virus diagnostic tool of high sensitivity, specificity, low cost, quick response, requiring no special personnel and offering the advantage of the portability. The paper was published in the Journal of Electroanalytical Chemistry.

To date, two main groups of materials have been thoroughly explored as transducer electrodes: i) the Au (gold)-based and ii) the carbon or graphene-based ones. Both present faster response time (within a few seconds) along with higher accuracy than the current detection methods, and most of them has also higher sensitivity. Moreover, many of them have the possibility of being portable and miniaturized.

Comparing the two groups of materials the researchers concluded that the carbon or graphene-based ones can compete the Au-based electrodes, as they have similar or better operational characteristics, also offering the advantage of lower cost.

In the current review, scientists recognize that in the case of the Au-based electrodes, the Au was mainly used in the form of nanoparticles onto alternative support (polymer-based or other) or supported onto reduced graphene oxide before being deposited onto the basic platform. The inclusion of the r-GO (reduced graphene oxide) to the Au nanoparticles significantly ameliorates SARS-CoV-2 sensor characteristics as it expands mainly the detection area that the virus binds.

In the case of carbon or graphene-based electrodes, surface functionalization constitutes the main strategy that was followed. Especially graphene and its derivatives, which are considered the most promising materials, does not contain chemically reactive functional groups that could help immobilizing analyte biomolecules. Thus, its surface or structure alteration was investigated by: i) doping graphene with another (bio)element, or ii) creating structure defects, or iii) being used as they are to modify screen-printed carbon electrodes.

Among the applied detection techniques electrochemical impedance spectroscopy, amperometry, and differential pulse voltammetry were the most used ones. Meanwhile, in the case of the amperometric technique, there is a concern about the 'real' current response of the sensor when being in an environment with high virus concentrations, as may diffusion phenomena prevail.

Electrochemical impedance spectroscopy, square wave voltammetry, and differential pulse voltammetry detection techniques are more sensitive and reliable, especially to the very low concentration values of the target analyte. However, for acquiring the 'real' charge the optimum operational conditions are set each time (Hz or voltage step, or scan rate, etc) according to the virus concentration.

Concluding their review, Tsiakaras and his colleagues report that among the explored electrode materials, Au-based and carbon or graphene-based electrodes are the two main material groups, while the nanomaterial-based electrochemical biosensors could enable a fast, accurate, and without special cost, virus detection. However, as they state, it is necessary to further research to be done in terms of various nanomaterials and novel synthesis strategies in order the SARS-CoV-2 biosensors to be commercialized.