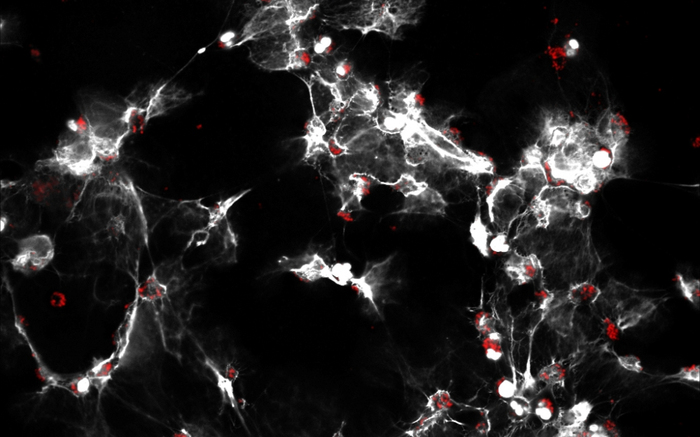 The study also proved that a drug originally indicated to treat alcohol dependence can inhibit the molecule’s action and prevent complications. Courtesy of CRID-USP

A new strategy for preventing complications associated with sepsis is presented by researchers affiliated with the University of São Paulo (USP) and collaborators in an article published in the journal Blood.

The proposal is to inhibit the action of a protein called gasdermin D, which the authors show is possible with disulfiram, a drug already approved for human use and originally indicated to combat alcohol dependence.

The study was conducted at the Center for Research on Inflammatory Diseases (CRID), one of the Research, Innovation and Dissemination Centers (RIDCs) funded by FAPESP. CRID is hosted by the University of São Paulo’s Ribeirão Preto Medical School (FMRP-USP) in Brazil.

“We know the drug is safe because it’s been in use since the 1950s, and we propose it be repurposed to treat sepsis. We saw that it worked in animal trials in the laboratory. We now need a clinical trial to assess its effectiveness in septic patients,” Camila Meirelles Silva, a postdoctoral fellow at CRID and first author of the article, said.

Popularly known as generalized infection, sepsis is actually systemic inflammation, frequently triggered by a bacterial infection that has entered the bloodstream. As the immune system combats the pathogen, it ends up damaging the entire organism. Severe sepsis patients develop lesions that impair the functioning of vital organs, especially the lungs.

In previous research, the CRID group showed that an immune mechanism known as neutrophil extracellular traps (NETs) is directly involved in septic patients’ tissue lesions. As the name suggests, NETs are a defense strategy used mainly by neutrophils, a type of white blood cell that phagocytizes (kills) bacteria, fungi, and viruses. In extreme situations, these immune cells themselves may die, and the material held in their nuclei is ejected to the external medium in the form of an extracellular network toxic to both pathogens and cells of the organism.

“In our latest study we investigated the mechanism that permits the release of NETs, in which gasdermin D is directly involved,” Silva said. “We show that when we prevented neutrophils from releasing these mesh-like traps by inhibiting gasdermin D, we were able to reduce the level of tissue injury and improve the patient’s prognosis.”

Some of the experiments involved white blood cells isolated from 24 septic patients hospitalized 24 hours previously (12 men and 12 women). Confocal microscope analysis showed NETs being released in vitro by a large proportion of the cells. The tests also pointed to a large amount of active gasdermin D in the patients’ neutrophils. This had already been observed in neutrophils isolated from septic mice.

“Gasdermin D is a pore-forming protein,” Silva said. “Previous research showed that when this molecule is activated in cells, it forms pores in the nuclear membrane that let genetic material out into the cytosol. Other pores are then opened up by gasdermin D in the plasma membrane, allowing all this content to be released into the extracellular medium. We proved that in sepsis the protein also acts in this manner.”

In vivo experiments were performed with mice submitted to a procedure designed to induce sepsis. Some expressed gasdermin D normally. The other group consisted of mice that had been genetically modified so as not to produce the protein in any cells of their bodies (gasdermin D knockout mice).

“When we induced sepsis, we found that the knockout mice produced a smaller amount of NETs, developed fewer organ lesions [with no pulmonary edema, unlike the rest], and survived more,” Silva said.

In vitro trials involving cells from knockout mice confirmed that neutrophils did not release NETs even in the presence of LPS, a molecule in the membranes of pathogenic bacteria usually interpreted as a threat by the immune system.

Data from the scientific literature showed that disulfiram binds to gasdermin D to prevent cell membrane pore formation by the protein. Based on this evidence, the CRID scientists decided to test the effect of the drug in the context of sepsis, for which there are no specific medications.

They found from in vitro tests that after treatment with disulfiram both human and murine neutrophils stopped releasing NETs when they were stimulated with LPS.

In another experiment, neutrophils isolated from septic patients were incubated with disulfiram. The treatment inhibited the release of NETs.

Lastly, septic mice were treated with disulfiram and their progress was compared with that of untreated mice. The treated animals had fewer tissue lesions (including less pulmonary edema), fewer NETs in the blood, and an improved prognosis: 60% survived, compared with 20% in the untreated group.

The results aroused interest in the scientific community and motivated a commentary, also published in Blood, by researchers Maksim Klimiankou and Julia Skokowa at University Hospital Tuebingen in Germany.

“Neutrophils deploy multiple defenses against pathogens, including phagocytosis, production of reactive oxygen species, secretion of bactericidal enzymes, and formation of NETs. Neutrophils pay a high price for all these defensive actions, dying during the process of digesting, neutralizing and killing invaders. However, not all is perfect in this line of defense: it is almost impossible to regulate the degree of neutrophil activation. Once activated, they frequently display hypersensitive phenotypes, causing deleterious effects both at the site of inflammation and systemically, and playing an essential role in the onset of the dysfunction process of multiple organs and the lethality of sepsis. Attacking the mechanisms responsible for the deleterious effects of neutrophils during sepsis while preserving other functions of these cells could represent a valuable therapy,” the German researchers write in the commentary.

Results of the research were also the theme of a podcast produced by the staff in Blood.

According to Fernando de Queiroz Cunha, a professor at FMRP-USP and CRID’s principal investigator, production of disulfiram was shut down in Brazil in 2019 and this has prevented the group from conducting a clinical trial.

“It was such a cheap drug that the company decided to take it off the market, and psychiatrists who treat alcohol-dependent patients now have to import it,” Cunha said. “As an alternative, we’re in talks with a Brazilian pharmaceutical company to develop a slightly modified molecule that could be patented and marketed domestically.”

Cunha also disclosed CRID’s intention to test whether disulfiram can be used to prevent organ lesions in COVID-19 patients. A previous study by the group showed that NETs participate in the runaway inflammation triggered by SARS-CoV-2.