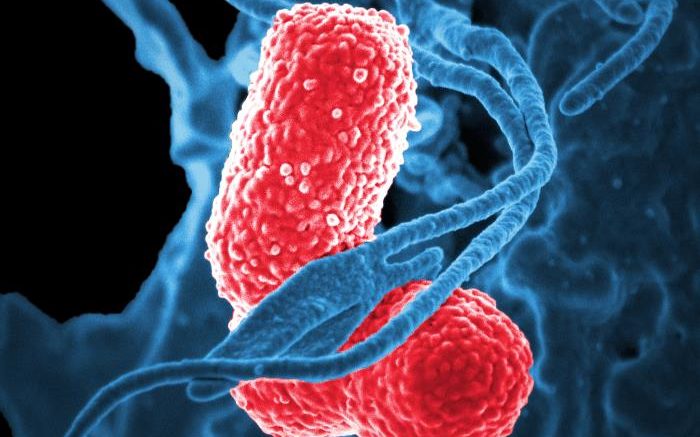 Using viruses instead of antibiotics to tame troublesome drug-resistant bacteria is a promising strategy, known as bacteriophage or “phage therapy.” Scientists at the National Institutes of Health have used two different bacteriophage viruses individually and then together to successfully treat research mice infected with multidrug-resistant Klebsiella pneumoniae sequence type 258 (ST258). The bacterium K. pneumoniae ST258 is included on a Centers for Disease Control and Prevention list of biggest antibiotic resistance threats in the United States. High rates of morbidity and mortality are associated with untreated K. pneumoniae infections.

Phage therapy has been pursued for about a century, though conclusive research studies are rare and clinical results — from a handful of reports — have provided mixed results. In the new paper published in the journal mBio, the NIH scientists note that phages are of great interest today because of a dearth of alternative treatment options for drug-resistant infections. Bacterial resistance has emerged against even the newest drug combinations, leaving some patients with few or no effective treatment options.

In research conducted in Hamilton, Mont., at Rocky Mountain Laboratories — part of the NIH’s National Institute of Allergy and Infectious Diseases — and in collaboration with the National Cancer Institute in Bethesda, Maryland, scientists completed a series of studies on research mice infected with ST258. They treated the mice with either phage P1, phage P2, or a combination of the two, all injected at different times following ST258 infection. The scientists had isolated phages P1 and P2 in 2017 from raw sewage that they screened for viruses that would infect ST258 — an indication that phages can be found just about any place. Phages P1 and P2 are viruses from the order Caudovirales, which naturally infect bacteria.

Each of the three experimental treatment regimens helped the mice recover from ST258 infection. The scientists noted that the dose of phage provided was less vital to recovery than was the timing of when the dose was received. Mice treated one hour after infection showed the strongest recovery, followed by those treated eight hours after infection and then those treated at 24 hours. Control mice treated with saline all quickly developed severe disease and died.

The scientists also checked the blood and tissue of phage-treated mice for the presence of ST258 bacteria and found there were significantly fewer bacteria at all time points regardless of the treatment method used, as compared to control mice.

Unfortunately, the scientists also found that ST258 bacteria recovered in the blood and tissue samples of phage-treated mice already had begun developing phage resistance, a finding they are continuing to investigate. The group also is studying how phage therapy results compare between samples of ST258-infected mouse blood and human blood, and are examining whether components of human blood can interfere with phage efficacy.

This study represents a first step in evaluating the use of phage therapy for treatment of severe K. pneumoniae ST258 infection in humans.