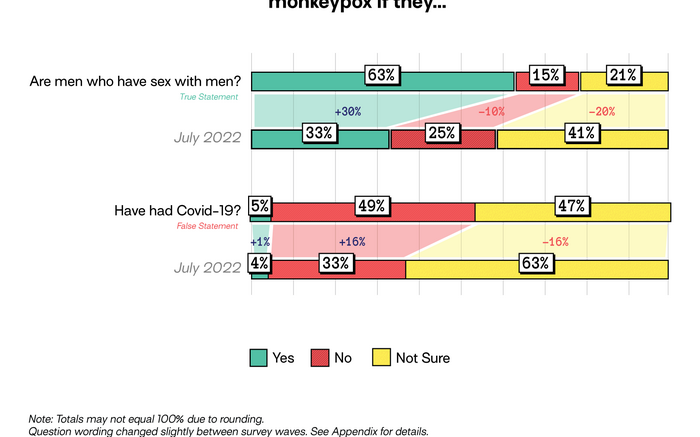 The public’s knowledge about monkeypox has increased rapidly in recent weeks though misconceptions and uncertainty persist, and over a quarter of Americans say they are not likely to get vaccinated against monkeypox if they’re exposed to it, according to a new Annenberg Public Policy Center (APPC) survey.

The national panel survey conducted in August finds that 1 in 5 Americans (21%) are somewhat or very worried about contracting monkeypox in the next three months, statistically the same as in our July survey (19%).

The findings come as officials in California and Texas report the deaths of two individuals who had contracted monkeypox, which was declared a public health emergency on Aug. 4 by U.S. health officials. As of Sept. 12, there were 21,985 confirmed U.S. cases, according to the Centers for Disease Control and Prevention (CDC). In late August, however, the rate of increase in new cases had slowed in parts of the United States, leading CDC director Rochelle Walensky to say she was “cautiously optimistic.”

The survey found increases in knowledge over a month since APPC’s last survey:

Over half (61%) know that a vaccine against monkeypox exists, up from 34% in July.
The vast majority (84%) know monkeypox usually spreads by close contact with an infected person, compared with 69% in July.
Nearly two-thirds (63%) know that men who have sex with men are at a higher risk of infection with monkeypox – up from one-third (33%) in July.
If exposed to the monkeypox virus, most Americans (73%) say they would be likely to get vaccinated – though over a quarter (27%) say they are “not too likely” or “not at all likely” to get the vaccine.

“At a time when people are questioning the capacity of public health authorities to effectively convey important information about consequential health risks, it is a credit to their efforts and those of the news media that the public has so quickly picked up critical knowledge about the new health threat posed by monkeypox,” said Annenberg Public Policy Center director Kathleen Hall Jamieson.

The nationally representative panel of 1,621 U.S. adults surveyed by SSRS for the Annenberg Public Policy Center of the University of Pennsylvania from August 16-22, 2022, was the eighth wave of an Annenberg Science Knowledge (ASK) survey whose respondents were first empaneled in April 2021. The margin of sampling error (MOE) is ± 3.3 percentage points at the 95% confidence level. See the appendix and methodology for additional information.

Monkeypox concerns
Monkeypox, a rare disease caused by an orthopoxvirus, is a less deadly member of the same family of viruses as smallpox, according to the CDC. The disease, discovered in 1958, is typically characterized by rashes and transmitted person-to-person by direct contact with the infectious rash, scabs, or body fluids of an infected person; respiratory secretions; by touching items that touched infectious body fluid; by a pregnant person to a fetus through the placenta; or to and from infected animals. On Sept. 7, the CDC said, “Monkeypox is often transmitted through close, sustained physical contact, almost exclusively associated with sexual contact in the current outbreak.” (For more about monkeypox, see APPC’s FactCheck.org’s Q&A.)

Monkeypox knowledge
The survey finds that:

Who is at higher risk of getting monkeypox?
The survey finds that people are knowledgeable about some risks of contracting monkeypox:

Are people who have had Covid-19 at higher risk? Almost half of those surveyed (49%) know that having had Covid-19 does not put someone at higher risk of infection with monkeypox, up from 33% in July. But a similar number (47%) are not sure whether or not this is true.

Higher risk if sharing bedding? Over two-thirds (68%) know that people are at higher risk of infection with monkeypox if they share bedding, clothing, or towels being used by someone has monkeypox. A quarter (26%) are not sure if this is correct.

Compared with July, in August there was much greater awareness of a vaccine to prevent monkeypox infection: 61% know that a vaccine for monkeypox exists, up from 34% in July. However, the latest survey still finds that a total of 4 in 10 people (39%) are unsure whether a vaccine exists or do not think it does, decreased from 66% in July. The Food and Drug Administration has licensed a vaccine for preventing monkeypox disease, and in addition, a vaccine licensed for smallpox is available to help prevent the disease, according to the CDC.

People can be vaccinated with the Jynneos monkeypox vaccine even after a known or presumed exposure to someone with monkeypox, ideally within four days after exposure, the CDC says.

When survey respondents were asked how likely they would be to take the monkeypox vaccine if exposed to monkeypox, less than half say they are “very likely”: