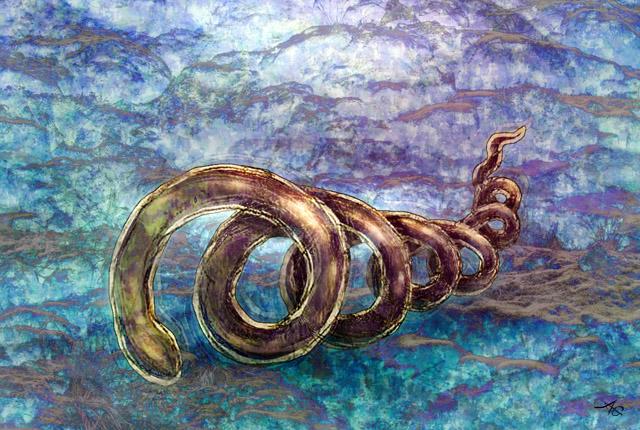 A watercolor-like illustration of Treponema pallidum, the bacterium that causes syphilis. Courtesy of Alice C. Gray

The finding may help explain how syphilis can hide in the body for decades, thereby frustrating the immune system's attempts to eradicate it. It might also account for the bacterium's ability to re-infect people who had been previously been infected and should have acquired some immunity to it.

Although syphilis remains easily treated with penicillin, infection rates in the United States have increased steadily over the past two decades. The count rose to more than 115,000 new U.S. cases of the infection in 2018.

Worldwide there are an estimated 6 million new cases of syphilis among adults. The infection is responsible for an estimated 300,000 fetal and neonatal deaths annually.

However, despite its importance as a cause of disease, relatively little is known about the biology of Treponema pallidum.

One reason for this is that until recently it was impossible to grow it in a laboratory dish. As a consequence, many of the laboratory tools used to study other bacteria had not been developed for syphilis specifically.

In a new study, researchers compared the genomes of syphilis bacteria collected from a man who had been infected four times. He was enrolled in a UW Medicine study of spinal fluid abnormalities in individuals with syphilis conducted by Dr. Christina Marra, professor of neurolgy.

The samples were derived from his blood during two infections that occurred six years apart. Between those infections he had been infected and treated two additional times.

The researchers wanted to see if there were differences between the genomes of bacteria from the first and last infection. This differences might reveal how the genes of the bacteria had changed and how those changes might have enabled the bacteria to infect a person whose immune system had already seen and mounted an immune response to several different strains of syphilis.

Surprisingly, the researchers found that there were very few changes between the genomes from the two different samples -- except for one gene.

"Across the about 1.1 million bases that make up the bacteria's genome there were about 20 changes total. That's very low," said Dr. Alex Greninger, assistant professor of laboratory medicine at the UW School of Medicine, who led the research project. "But on this one gene, we saw hundreds of changes."

That gene, called Treponema pallidum repeat gene K (tprK), provides the instructions for the synthesis of a protein found on the surface of the bacterium. Proteins on the surface of a bacterium are typically more easily seen by immune cells and so are often prime targets for immune attack.

The study builds on decades of work from Drs. Sheila Lukehart and Arturo Centurion-Lara in the Department of Medicine at the University of Washington School of Medicine.

They first showed that TprK generated considerable diversity across seven discrete regions in which DNA sequences from elsewhere in the bacterium's genome could be swapped in and out. This process is called gene conversion.

Work in their lab demonstrated that bacterial cells with new tprK variants can evade the immune response to cause a persistent infection that can lead to the later stages of syphilis.

Amin Addetia, a research scientist in Greninger's lab and lead author on the study, said it was as though the bacterium has a deck of cards in its genome from which it can draw and deal to these variable regions, essentially changing the protein's "hand." These substitutions change the protein's appearance on the surface to allow it to elude the immune system.

"I've looked at a lot of bacterial genomes," Addetia said, "and they're a lot more interesting than the Treponema's, except for this one gene.It can generate an astounding number of diverse sequences within these variable regions without impairing the protein's ability to function."

Although bacteria, viruses and parasites may have many proteins on their surfaces that the immune system could detect and attack, in many cases only one protein seems to attract most of the attention. Such proteins are called immunodominant.

They may protect the bacterium by catching the immune system's attention, Greninger said. "The protein acts like a distraction that draws the immune system away from proteins that might be the bacterium's Achilles heel. More work will be required to determine if this is the case in TprK."

Greninger said he hoped the findings might help researchers develop vaccines that allow the immune system either to attack TprK more effectively or to ignore TprK and target other, less variable syphilis proteins.