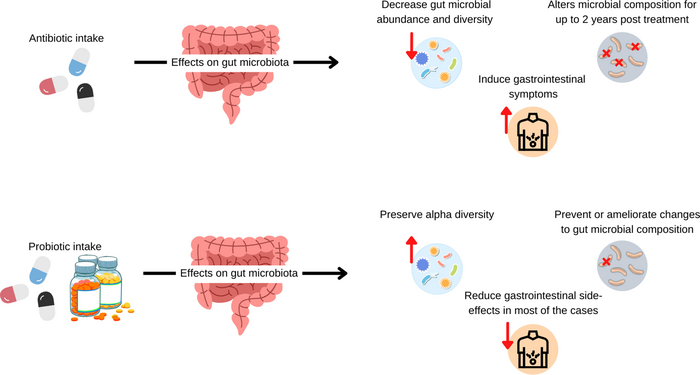 Millions of antibiotics are prescribed every year. Although they can be incredibly effective at treating infections, antibiotics usually do not solely target the bacteria that is causing infection. They also kill the harmless bacteria that live in our gut and help us stay healthy. There is evidence that this disruption to the gut microbiome composition can last for up to 2 years after antibiotic treatment. Gastrointestinal symptoms such as diarrhoea and bloating are also common side effects of antibiotic use.

Dr. Elisa Marroquin, assistant professor at Texas Christian University, and co-author of the paper, explained, “Like in a human community, we need people that have different professions because we don’t all know how to do every single job. And so the same happens with bacteria. We need lots of different gut bacteria that know how to do different things. Even though we haven’t come up with a single definition of what is a healthy gut microbiome, one of the constant things we observe in healthy people is that they have a higher level of diversity and more variety of bacteria in the gut.”

A new paper published in the Journal of Medical Microbiology reveals the first systematic review to assess the effect of taking probiotics alongside antibiotics on the diversity and composition of the human gut microbiome. Authored by researchers from the School of Medical and Health Sciences at Tecnológico de Monterrey, University of Texas and Texas Christian University, the review evaluates trends across 29 studies published over the past seven years.

The authors found that taking probiotics alongside antibiotics can prevent or lessen some antibiotic-induced changes to gut microbiome composition. Probiotics can also help protect species diversity and even restore the populations of some friendly bacteria such as Faecalibacterium prausnitzii, which reduces inflammation and promotes a healthy intestinal barrier.

Marroquin said, “When participants take antibiotics, we see several consistent changes in some bacterial species. But when treatment was combined with probiotics, the majority of those changes were less pronounced and some changes were completely prevented. Considering the human data available up to this point, there does not seem to be a reason to withhold a prescription of probiotics when antibiotics are prescribed.”