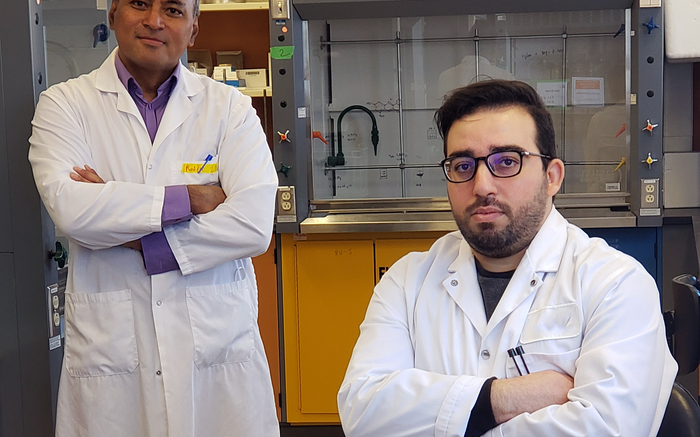 Professor Charles Ramassamy and his postdoctoral researcher Mohamed Haddad who conducted the research at INRS. Courtesy of INRS

Using a multidisciplinary approach, the teams showed that tannic acid inhibits the viral protein (RBD) of the British variant of SARS-CoV-2 from binding to its biological target, the ACE2 receptor. This receptor, which is found on the surface of many cells in the body, allows the virus to latch on and infect them. “Tannic acid binds to the RBD protein and prevents it from binding to the ACE2 receptor,” said Ramassamy. He explained that in blocking the viral protein, tannic acid does not alter the physiological functions of ACE2 receptors, which have physiological functions in the body’s respiratory, cardiovascular, and renal systems, among others.

His team further investigated the effects of tannic acid on other key mechanisms involved in SARS-CoV-2 infection downstream of the RBD-ACE2 bond. The team showed that this polyphenol can inhibit the activity of the enzyme that allows the virus to enter our cells (TMPRSS2), as well as the viral enzyme responsible for replicating the virus (3CLpro).

The effects of tannic acid on the RBD protein and these enzymes pave the way for further research on the entire virus in contact with human cells. If the beneficial properties are similar on a larger scale, tannic acid tablets or nasal spray could be envisaged as a means for preventing or blocking SARS-CoV-2 infection.

Tannic acid is a natural polyphenol found in many beverages such as red wine or tea, but in much lower quantities. Although they contain tannins, their consumption would not have any protective effects because of their low concentration of tannic acid.

“It would be less expensive than the antivirals currently on the market, and there would be fewer side effects because of the low toxicity of tannic acid and other polyphenols. In addition, tannic acid and its physiological derivatives have anti-inflammatory and antioxidant properties, both of which are beneficial if you are infected with SARS-CoV-2,” said Professor Ramassamy.

The research builds on the teams’ previous work on two other types of polyphenols—TGG and corilagin—and their interaction with a number of SARS-CoV-2 variants. The two compounds had similar beneficial effects, but were less effective than tannic acid.