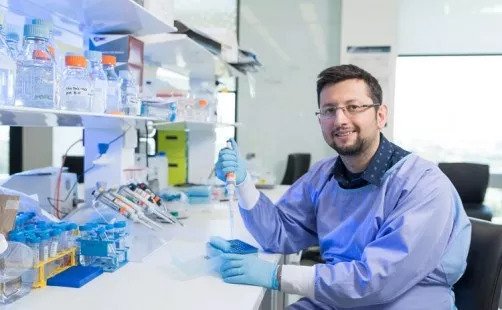 A molecular biologist from the University of South Australia is working with a world leader in artificial intelligence-based drug discovery to help find a molecule that could prevent the SARS-CoV-2 coronavirus strain causing COVID-19 from infecting human cells.

Dr. Gokhan Cildir has been selected by San Francisco company Atomwise to collaborate on research to use artificial intelligence to discover compounds that could successfully fight SARS-CoV-2.

From millions of molecules screened virtually, Atomwise has identified likely contenders and has sent those compounds to Cildir to test at the Centre for Cancer Biology (CCB) in Adelaide. The goal is to develop inhibitors for the ‘spike’ protein used by SARS-CoV-2 to invade human cells.

“Although coronavirus uses many different proteins to replicate and invade cells, the spike protein is the major cell surface protein that it uses to bind to a host receptor — another protein that acts like a doorway into a human cell,” Cildir says. “I believe there is a very high chance we will get a vaccine in the next year, but our own approach is to find the compound which can actually block SARS-CoV-2 because it will be impossible to vaccinate everyone in the world, especially the most vulnerable.”

The team hopes over the next 6-12 months to identify compounds which could potentially be patented and tested in vitro and animal models before undertaking any clinical trials in humans.

Atomwise is leveraging its unique AI-based drug discovery model for several other projects in the fight against COVID-19. There are currently 15 efforts underway and the company anticipates that number will grow.

“Atomwise’s patented AI technology has been proven in hundreds of prospective projects to discover drug leads for a wide variety of diseases, and we’re very optimistic about the role we can play when it comes to COVID-19,” says Dr. Stacie Calad-Thomson, vice president and head of Artificial Intelligence Molecular Screen (AIMS) Partnerships at Atomwise.

“We’re hopeful that the therapies discovered will not only target this pandemic, but potential future recurrences.”

Cildir, who is funded by The Hospital Research Foundation, is a postdoctoral researcher based in CCB’s Allergy and Cancer Immunology Laboratory led by Dr. Damon Tumes. He has been working at UniSA since late 2016 after completing his PhD at the National University of Singapore in the School of Medicine. He has previously collaborated with Atomwise on other work, but this is his first virology project.

“It is like looking for a needle in a haystack but if we are successful it will be a world first, so we are very excited about the possibilities,” he says.