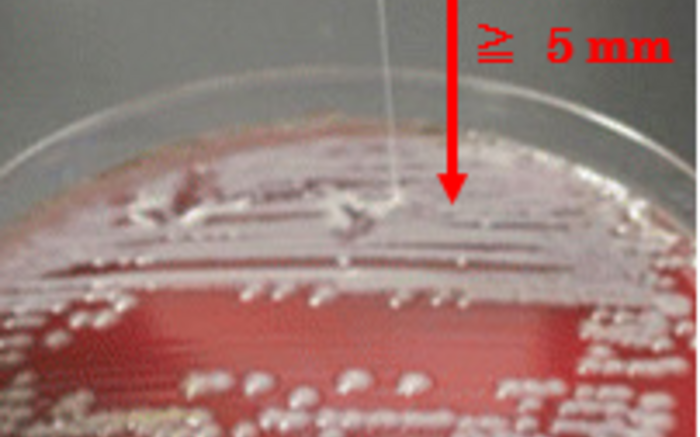 Hypermucoviscous strains of K. pneumoniae are stickier than previous strains. They can form into abscesses and are easily aggravated. HMV strains are those that can be pulled into a strand more than 5mm from the blood agar plate. Adapted from Figure 2 of Seo, R., Kudo, D., Gu, Y. et al. Invasive liver abscess syndrome caused by Klebsiella pneumoniae with definite K2 serotyping in Japan: a case report. surg case rep 2, 72 (2016).

Klebsiella pneumoniae are bacteria that can cause various infections. These bacteria are becoming increasingly resistant to treatment, leading to life-threatening illnesses. To address a lack of research into more recent strains, a Kobe-Taipei collaboration conducted comparative analyses. They took samples of extended-spectrum beta-lactamase (ESBL)-producing strains from infected patients in Japan. ESBL reduces the effectiveness of beta-lactam antibiotics such as penicillin and cephamycins that are often used to treat infections. In addition, some new strains are hypermucoviscous (HMV); they are thicker and stickier than previous strains. By analyzing the samples of ESBL-producing strains, the researchers discovered that many of the HMV strains also carry higher rates of virus-causing genes and that conventional drugs are ineffective against them. These results have important clinical applications for the establishment of appropriate and rapid treatment methods for HMV strains in Japan.

These research results were published online in the Journal of Microbiology, Immunology and Infection on Aug. 20, 2022.

K. pneumoniae are bacteria that can cause various infections including urinary tract and respiratory tract infections. Among these bacteria, it has been reported that hypermucoviscous (HMV) K. pneumoniae, which are more viscous than previous strains, have higher risk of causing serious illness and mortality.

Previously, antibiotics have been effective in treating the majority of patients with HMV strains. However in recent years, the existence of extended spectrum beta-lactamase (ESBL)-producing HMV strains has been confirmed. ESBL is an enzyme which breaks down drugs, making them ineffective. This is a serious issue because it means that in addition to the risk of serious illness, the drugs that have been used up until now to treat K. pneumoniae no longer work against these new strains.

Furthermore, ESBL-producing genes can be spread extensively to other bacteria by plasmids (small DNA molecules). As these bacteria become increasingly more drug-resistant, it is vital to monitor their characteristics and changes across countries and decades. However, detailed surveys of HMV strains have yet to be conducted in Japan. To address this, the current research team carried out a comparative analysis of ESBL-producing strains sampled from patients in Japan; HMV strains and previous non-HMV strains. For each strain, they compared drug effectiveness, drug resistance, virulence gene distribution, and plasmid type.

Between 2012 and 2018, 291 strains of ESBL-producing K. pneumoniae were detected in infected patients in Japan. Of this number, the research team investigated drug effectiveness, drug resistance, virulence genes and plasmid types of 107 strains (54 HMV strains and 53 non-HMV strains).

The results revealed that the majority of HMV strains carry virulence genes and that the rate is higher than that of non-HMV strains (Figure 1). It is thought that HMV strains have more hypervirulence factors. In addition, K. pneumoniae capsule serotypes play a role in the bacteria’s viscosity. This study found that capsule serotype K2 was the most common in HMV strains (40.2%). Previous surveys have also reported many K2 type HMV strains, therefore it is considered highly likely that K2 type K. pneumoniae are hypermucoviscous with the high virulence that accompanies this.

To assess the effectiveness of drugs on these strains, the researchers used the beta-lactam antibiotic Cefepime (14.8% vs. 43.4%, p = 0.005) and Piperacillin/Tazobactam (70.4% vs. 92.5%, p = 0.001), which is a combination medicine consisting of a beta-lactam antibiotic (piperacillin) and an ESBL inhibitor (tazobactam). They confirmed that the effectiveness of these drugs against the HMV strains (the susceptibility rate) was poor when compared to non-HMV strains (Figure 2). These results show that HMV strains have acquired drug resistance at a higher frequency than non-HMV strains. In other words, drugs are becoming ineffective against them.

Next, the research group investigated the presence of genes related to ESBL production, which is the main cause of drug resistance. They found that a type of ESBL producing gene called CX-M-15 had the highest prevalence rate in both HMV and non-HMV strains (75.9% and 60.4% respectively), and that the major plasmid type in this gene is FII (52.1%). Research studies carried out in other countries have also reported many K. pneumoniae with CTX-M-15 type ESBL-producing genes, with the current study showing an upward trend in strains with this gene in Japan as well.

In conclusion, the above results demonstrate that HMV strains have a high rate of virulence genes and a high level of drug-resistance. In addition, their results also showed that the most common type of ESBL-producing gene is CTX-M-15 and suggested that the FII type plasmid might be extensively transmitting CTX-M-15 to other strains.

HMV K. pneumoniae infections require rapid treatment because of the high risk of serious illness. In addition, inappropriate administration of drugs is the main reason that these bacteria are becoming resistant. To treat HMV strains, it is vital to have an accurate understanding of drug resistance and quickly select an appropriate drug.

This study reports that current HMV K. pneumoniae in Japan carry higher rates of virulence genes than past non-HMV strains and drug effectiveness against them is poor. These findings are expected to make a significant contribution towards efforts to treat HMV strains appropriately and quickly at Japanese hospitals.

Further investigations into HMV strains’ mechanisms of causing serious illness and drug resistance will lead to the establishment of novel treatment methods.