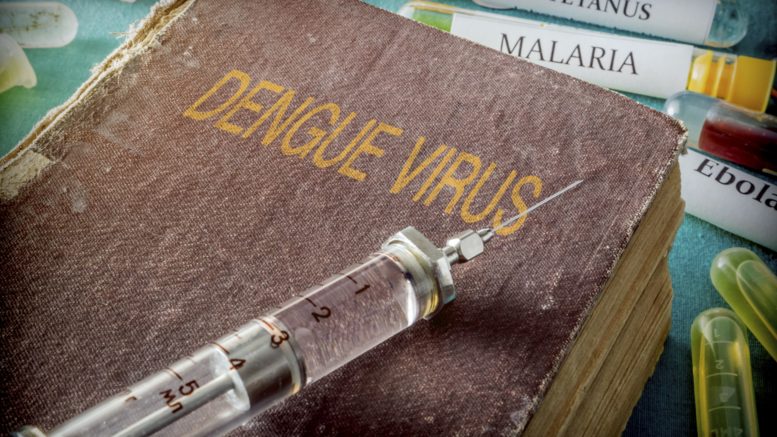 Two new species of viruses have been identified in blood samples taken from patients in Brazil's northern region who had similar symptoms to those of dengue or Zika, such as high fever, severe headache, rash and red skin spots. One belongs to the genus Ambidensovirus and was found in a sample collected in the state of Amapá. The other belongs to the genus Chapparvovirus and was found in blood from the state of Tocantins. The study was supported by São Paulo Research Foundation - FAPESP. The results are published in the journal PLOS ONE.

"What surprised us most was finding an Ambidensovirus in a human sample. Viral species in this genus have been described only in insects, shellfish and other invertebrates. Never in mammals," said Antonio Charlys da Costa, a postdoctoral fellow at the University of São Paulo's Medical School (FM-USP) and one of the authors of the study.

According to Costa, different species of Chapparvovirus have been described in other mammals but, again, never in humans. "However, we don't yet know whether these viruses were active in the patients, let alone whether they caused the symptoms," he told.

For Eric Delwart, a senior investigator at the Vitalant Research Institute in the United States and supervisor of the project, scientists can use these findings to investigate whether novel viruses are present in other people in the region or in other populations and whether there is a risk of dissemination.

"So far no evidence has been found that these viruses have spread or that they're pathogenic," Delwart said. "However, it's scientifically interesting that Ambidensovirus has been detected in human hosts. The discovery shows how little we know about the ability of certain viruses to infect different kinds of cells."

Delwart also stressed the importance of reanalyzing existing clinical samples in epidemiological studies of potential emerging viruses. In the study discussed here, the samples analyzed were originally collected by central public health laboratories (LACENs) in several states across Brazil as part of their routine surveillance activities.

The identification of the new species was possible thanks to a technique known as metagenomics, which entails the concomitant sequencing of all the genetic material in an entire blood, urine, saliva or fecal sample, including each of the microbes that exist within it. The technique can also be used, for example, to study all the bacteria and fungi in the soil of a region or to map the different species in a person's gut microbiota. Once all the nucleic acids in a sample have been extracted and sequenced, bioinformatics tools are used to compare the results with known genome sequences described in databases.

Costa learned the methodology during his PhD research, while he was on an internship at Delwart's laboratory. The supervisor in Brazil was Ester Sabino, a professor at FM-USP who headed the university's Institute of Tropical Medicine (IMT-USP) between 2015 and 2019.

The PLOS ONE article reports the results of analyses of 781 samples collected between 2013 and 2016. Anelloviruses were found in 80% of patients, while 19% contained type 1 human pegiviruses (HPgV-1). Neither genus is thought to cause significant pathologies. In 17%, the researchers detected parvovirus B19, which causes erythema infectiosum (slapped cheek syndrome or fifth disease), a common childhood ailment characterized by a mild fever and rashes on the face, arms, legs and trunk.

The viral species that had never been described, both belonging to the family Parvoviridae, were found in only two of the samples. The plasma samples were provided by the LACENs for Amapá, Tocantins, Paraíba, Maranhão, Mato Grosso do Sul, Piauí and Maranhão states.

"The study continues, and altogether we've received 20,000 samples for analysis. They send us samples that test negative for dengue, Zika and chikungunya. In our lab at IMT-USP, we perform molecular tests to detect other known flaviviruses [which cause yellow fever or West Nile fever, for example], alphaviruses [including Mayaro virus and several species that cause encephalitis] and enteroviruses [which can cause respiratory diseases and hand-foot-and-mouth syndrome, among others]. If we find none, we move on to the metagenomic analysis," Costa said.

The aim of the project, he added, is to describe the viral diversity found in Brazil and identify species that may be causing diseases in humans unnoticed amid outbreaks of disease caused by arboviruses.

A study published in the journal Clinical Infectious Diseases in 2019, for example, reported on a hidden outbreak of parvovirus B19 during a dengue epidemic in 2013-14. The principal investigator was the virologist Paolo Zanotto, a professor at the University of São Paulo. The study was supported by FAPESP.

"This is a significant case from a public health standpoint. If it infects pregnant women, parvovirus B19 can cause severe problems in their fetuses," Costa said.

Further detailed studies will be required to determine whether the two novel viruses described are a human health hazard.

"We tried and failed to infect cell cultures in the lab, either because these viruses don't infect the type of cell used in the experiment or because the viral particles contained in the samples we analyzed were no longer viable. We don't know," Costa said.

However, the group obtained a second sample of the virus identified in the patient from Tocantins (a chapparvovirus) and is now developing a serological test. "The idea is to see whether this patient and their family have antibodies against this microorganism, in which case they were infected in the past and produced a response against the virus," Costa said.

The study was also supported by FAPESP via the project "Viral metagenomics to track, explain and predict the transmission and spatiotemporal spread of Dengue and Chikungunya viruses in Brazil", for which Sabino was principal investigator.