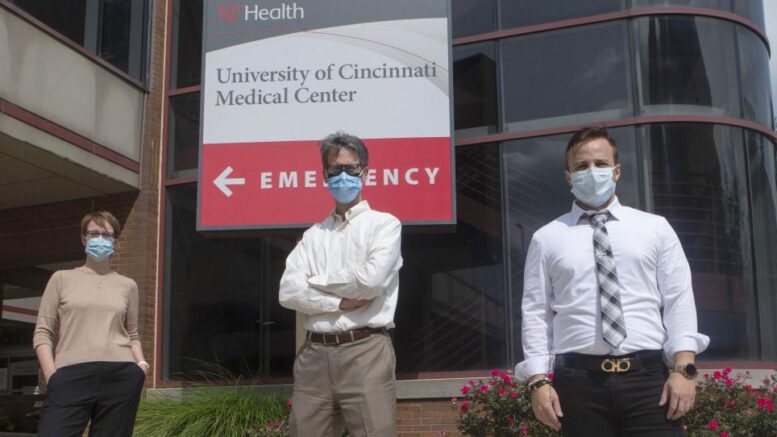 Early in the onset of the COVID-19 pandemic, a small study in China produced results that influenced subsequent research on the virus. Researchers at the University of Cincinnati used the same study parameters on a much larger patient population and reached completely different findings. The study was published in the journal Progress in Cardiovascular Diseases in mid-July.

The primary theory that emerged from the 12-patient study in China was that when the virus binds to the angiotensin converting enzyme 2 (ACE2), a protein on the surface of lung cells by which the virus is able to enter and infect the cell, it disrupts a vital hormonal system called the Renin-Angiotensin-Aldosterone System (RAAS).

Henry says much of the debate around COVID-19 research has been on the potential for danger from certain drugs, such as ACE inhibitors and angiotensin receptor blockers, because of the disruption of RAAS, while other researchers are testing those same drugs as therapies in patients with COVID-19.

"We were interested in trying to figure out what's actually going on with RAAS," Henry says. "There are a lot of clinical trials targeting RAAS, but no one has really examined if it is truly affected and disturbed in these patients. That was the focus of our investigation."

When COVID-19 first hit, anyone presenting to University of Cincinnati Medical Center with potential symptoms of the virus was isolated in a separate part of the emergency department called the "Respiratory ED." A lot of those people were getting blood work done, so researchers were able to pull a blood sample from those patients.

"This sets up a nice, natural experiment where all these patients are in the ED and they all have respiratory symptoms," says Justin Benoit, MD, assistant professor in the Department of Emergency Medicine at the UC College of Medicine, who ran the logistics of the study.

"Some have COVID, some do not, and we don't know who does or doesn't have COVID when you're drawing the blood. Then you can start looking for differences. Since they all present similarly, when you find differences between these patient groups, you might be able to attribute that to COVID."

Benoit says the researchers' goal was to try to find pathways that are altered in patients with COVID-19 that have specific pharmacological targets that could be used in subsequent studies.

"We were trying to inform clinical trials because there are a lot of trials being proposed or up and running at UC and in other places, but most are based on theory and conjecture and not necessarily based on actual data," Benoit says.

Henry says they wanted to learn more about the main hypothesis on how COVID-19 causes severe disease in some patients. The enzyme called ACE2 breaks down a peptide called angiotensin II (AngII), which causes inflammation and restricts the vessels within the lung in models of people with acute respiratory distress syndrome (ARDS), according to Henry.

"The ACE2 enzyme that the virus uses takes AngII and converts it into another peptide called angiotensin (1-7)," says Henry. "The idea is that when the virus binds to the enzyme, its activity stops and levels of AngII start to rise dramatically. That's what propagates the severity of the infection and causes people to develop ARDS, or so the theory goes."

Reducing AngII levels is also the goal of the most commonly prescribed medication in the United States, ACE inhibitors such as enalapril or lisinopril for hypertension.

The research team measured levels of this peptide in COVID-19 patients and discovered that AngII levels were normal. Henry says based on the results of the 12-person study in China, they expected to see AngII levels that were very high, but that was not what they found in their study of 190 patients.

In a recently published follow-up study in the Journal of Medical Virology, the research team reported low levels of angiotensin (1-7) as compared to healthy controls.

"This is among the first substantial evidence supporting the hypothesis of a potential inhibition of ACE2 activity due to virus binding," Henry stated. "As angiotensin (1-7) is anti-inflammatory peptide that also dilates the vessels, low levels of this peptide due to [the coronavirus] may promote ARDS. As such, supplementation with synthetic angiotensin (1-7) may be a potential therapeutic target for treating COVID-19."

The blood samples collected in the UC Medical Center Emergency Department were analyzed by the lab run by Stefanie Benoit, MD, in the Division of Nephrology and Hypertension, wife of Justin, and co-author of the study. She says the speed at which this trial got up and running is unprecedented.

"We have dismantled a mountain and moved it 30 feet and reassembled it in three months," she says. "Everybody stepped up, it was just amazing. The lab workers got things done in two days that normally take two weeks."

Stefanie says one important aspect of this study is that it produced data that can hopefully help guide further research into the pathophysiology of COVID-19.

"We could not reproduce the data that came out of China," she says. "Our data is completely different, in the same patient population, measured at the same time, measured in the same laboratory technique. That small study is what all of this was built off of. It's kind of a warning or reminder that we are doing things now in ways they've never been done before, so we have to be thoughtful about when data comes out, what it means and how we use it."

Benoit says he was very impressed by the fast response to the need for COVID-19 research by the UC College of Medicine and its leadership, including Andrew Filak, MD, the dean of the college. The research was funded by a $50,000 grant from the UC College of Medicine Special Coronavirus Research Pilot Grant Program that was announced in early April. In all, $425,000 was awarded to 11 projects through the program which was established to rapidly support the development of innovative studies that will contribute significantly to the knowledge of COVID-19 biology or pathology.