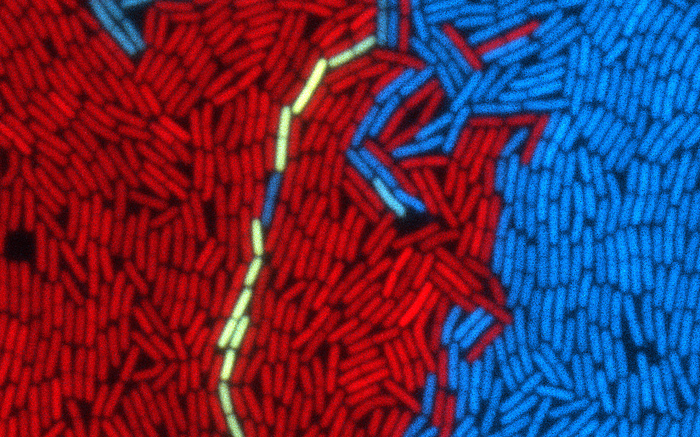 Bacteria which contain a "dormant" parasitic element (blue) are awakening and getting yellow in the presence of bacteria which do not contain the element (red). Courtesy of Tel Aviv University

A new study from Tel Aviv University has found that, just like humans with Game Theory, viruses called bacteriophages (or phages) weigh all options and finally make an informed decision -- whether the time has come to exit the dormant state and attack their bacterial host.

The study was led by professor Avigdor Eldar of the Shmunis School of Biomedicine and Cancer Research at Tel Aviv University, together with his students and partners from the Weizmann Institute of Science. The paper was published in December 2021 in the journal Nature Microbiology.

Phages are viruses that attack bacteria. Many phages can exist in one of two states: active (lysis), in which the phages attack and destroy bacteria, or dormant, in which they remain passive within the bacteria, replicating themselves but doing no damage (lysogeny). Phages of this type must decide whether to be active or dormant every time they infect a new host. If they decide to be dormant for a time, they must also decide when to 'wake up' and attack. As in all dilemmas, it's important to base the decision upon solid, reliable information.

According to the researchers, it has been assumed for some time that a phage bases its decision to exit the dormant state on information regarding condition of its bacterial host: when the host shows signs of substantial DNA damage (death throes, so to speak), it is in the phage's interest to leave it and try to infect other bacteria.

The new study discovered an additional mechanism of communication between bacteria and phages: apparently, some phage families have developed a more complex decision-making strategy, a kind of 'phage game theory', in which the phage receives information not only from its own host but also from neighboring bacteria.

Eldar explains, "When a phage is dormant within a bacterial cell, it forces its host to constantly produce small communication molecules called arbitrium, to which the phage listens via a special receptor. Thus, the presence of high levels of these molecules indicates that neighboring bacteria also contain phages. When this happens, even if its own host exhibits DNA damage, the phage refrains from becoming active. Since every bacterium can only host one dormant phage, the phage makes an informed decision: it's better to let the host try to repair itself than to 'betray' it, since all neighboring bacteria are already taken."

Eldar and his team used a range of genetic and biomolecular methods to track the biochemical communication signals passing between the bacteria and phages. In a former study they used a fluorescent marker to show that communication methods used by phages, as well as a large family of similar communication systems (know generally as 'quorum sensing') are used only to get signals from close neighbors.

"Essentially, the bacteria have developed two separate communication systems – one for long-range communication, and the other for short distances only, used to sense the state of their immediate neighbors," says Eldar. "In the phage's case, it controls communication, and is only interested to know whether its close neighbors, which it might easily infect, are already occupied."

Eldar concludes, "Several years ago Rotem Sorek and his team at the Weizmann Institute identified communication between phages for the first time. Such systems had been known to exist between other molecular parasites hosted by bacteria (called plasmids). Our new discovery is the fact that phages use communication even in their dormant state. We have identified components critical for understanding how phages combine information about their host's condition with information about their neighbors. This is one more important step on the way to deciphering the communication and 'behavioral economics' of viruses. Phages have an excellent ability to process information and make the right decision to ensure optimal survival. It will be interesting to see whether viruses residing in more complex organisms but facing similar decisions have also developed comparable systems of communication."