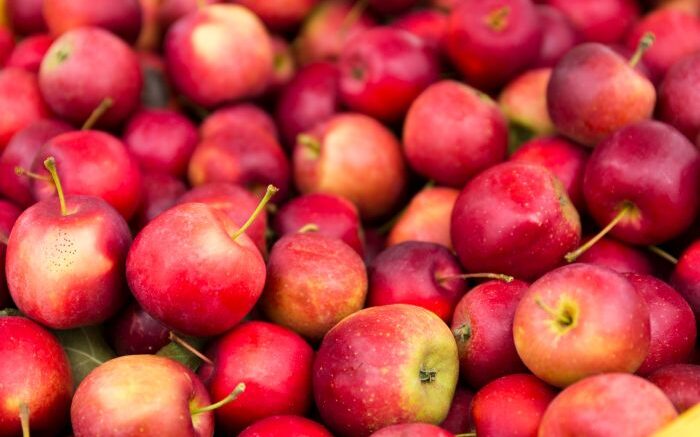 When they’re prepared for transport, apples and other fruits are often treated with a fungicide to prevent spoilage and extend shelf life. The practice preserves freshness, but it may be a double-edged sword: They may help select and boost the transmission of pathogenic yeasts that are multi-drug resistant. A study published this week in mBio offers new evidence for that idea.

Previous studies have examined the effect of fungicides on the human pathogen Aspergillus fumigatus, said mycologist Anuradha Chowdhary, MD, PhD, at the University of Delhi, but the new work focuses on drug-resistant strains of Candida auris, a pathogenic yeast that spreads quickly in hospitals and has been isolated from nature. Fungicides used in agriculture may inadvertently select the drug resistant fungi, Chowdhary said.

She and her collaborators screened the surfaces of 84 fruits, representing 9 different tree fruit types, for pathogenic C. auris and other yeasts. The fruits were collected in 2020 and 2021 from areas of northern India and included 62 apples—20 picked in orchards and 42 purchased from a market in Delhi. Each fruit species hosted at least 1 type of yeast.

The scientists focused on the apples. They found drug-resistant strains of C. auris on a total of 8 apples (13%) and used whole genome sequencing to identify 16 distinct colonies. The apples included 5 ‘Red Delicious’ and 3 ‘Royal Gala’ varieties. All 8 of those apples had been stored before purchase, and none of the freshly-picked apples hosted C. auris.

C. auris is resistant to many drugs. It was first identified in 2009 in Japan, and since then it has emerged in or spread to all inhabited continents. Researchers have been investigating how the pathogen originates and spreads. “We still don’t really understand the forces that drive the simultaneous emergence of multiple distinct genetic clusters of C. auris,” Xu said. A study led by Chowdhary and Xu published last year in mBio was the first to isolate C. auris from a natural environment, the marshes and sandy beaches of a natural coastal ecosystem in the Andaman Islands, India.

The new findings suggest the apples could be a selective force for the pathogen, and help it to spread. Although the study focused on fruits collected from northern India, Xu pointed out that the spread of C. auris is not an Indian-specific phenomenon. It’s a global menace: In 2019, the Centers for Disease Control and Prevention identified C. auris as 1 of 5 pathogens that pose an urgent threat to public health worldwide. To figure out how to respond to the pathogen’s threat to humans, researchers need to know how it travels through other natural systems.

“When we look at human pathogens, we tend to look at what’s immediate to us,” Xu said. “But we have to look at it more broadly. Everything is connected, the whole system. Fruit is just 1 example.”

Fungi are an important part of the environment, and Chowdhary said the new study shows how the environment, animals and humans are all connected—the central tenet in the concept of One Health. “The One Health concept warrants continuous efforts and our attention in preventing the transmission of infections,” she said.