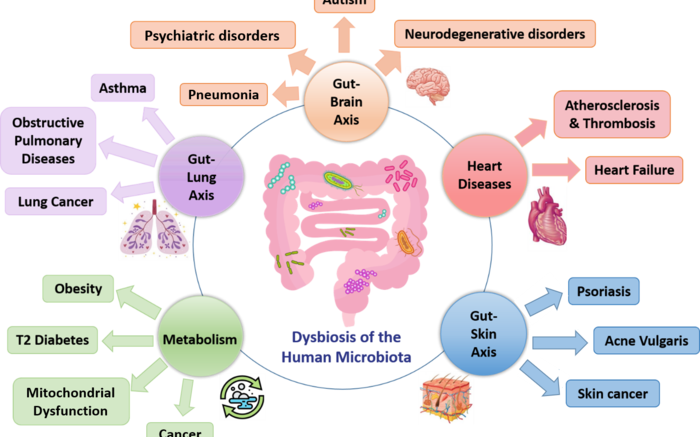 Gut microbiota is implicated in the right functioning of many organs, such as lungs, kidneys, liver, heart and brain. However, any disruption to the microbiota homeostasis results in the malfunctioning of these affected organs, and the progression of many related diseases. Courtesy of International Society of Microbiota

Numerous investigations have shown a bidirectional interplay between gut microbiota and many organs within the human body such as the intestines, the lungs, the brain, and the skin. A large body of evidence demonstrated more than a decade ago that the gut microbial alteration is a key factor in the pathogenesis of many local and systemic disorders. In this regard, a deep understanding of the mechanisms involved in the gut microbial symbiosis/dysbiosis is crucial for clinicians.

The scientific board of International Society of Microbiota (ISM) published the most recent studies on the involvement of gut microbiota in the pathogenesis of many diseases. They also elaborated the different strategies used to manipulate the gut microbiota in the prevention and treatment of disorders. The conclusion of this report confirms again that the future of medicine and health is strongly related to our microbiota.

Twenty-one high-level authors and members of the International Society of Microbiota, coming from eight countries and more than 10 reputable institutions published a new strategic report titled “Microbiota medicine: toward clinical revolution.” Published in the Journal of Translational Medicine, this stunning review that covers all topics you need to know concerning microbiota.

From human microbiome and microbiota dysbiosis in human diseases, to the therapeutic strategies in the gut microbiota manipulation, this article clarifies the key role and implication of microbiota in human health. Gut microbiota is in constant change with human evolution, as well as with the host gastrointestinal microenvironment, which makes it easily altered by many endogen and external factors. Among the latter, the built environment microbiome which can have a great impact on the human health.

It has been widely demonstrated that gut microbiota is tightly related to host organs through a multidirectional crosstalk involved in maintaining a global homeostasis. Among these flora-organ interactions: gut-lung, gut-brain, gut-skin axes, and many others. Any microbial dysbiosis could lead to an increased risk of pathogenesis of many diseases. For instance, some dysbioses are responsible for the inflammation of the gastrointestinal tract, metabolic and cardiovascular-renal disorders, as well as neurological disorders.

In the therapeutic context, targeting specific microbial components or metabolites could provide a tool in the treatment of many diseases. Beyond having the pre- or probiotics, which are the traditional and first line choice of microbial therapies, other strategies are being clinically studied such as the FMT, metabolites, phages and miRNAs.

Professor Marvin Edeas, the corresponding author and founder of ISM, from Institut Cochin, INSERM, Unviersité de Paris, stated, "This is a great report which confirm that the future of medicine is strongly related to the quality of our microbiota. Targeting microbiota dysbiosis will be a huge challenge. Another task face us today is to target mitochondria and microbiota together. The Artificial Intelligence will push microbiota medicine to an exceptional level where we will detect rapidly microbiota dysbiosis, modulate the microbiome and treat hundred of diseases."