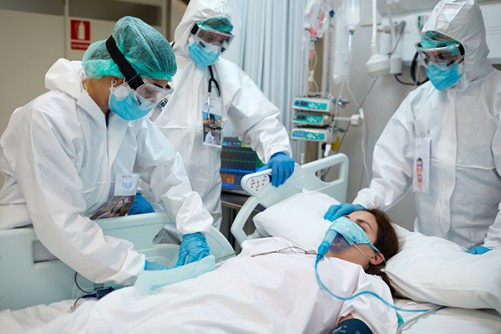 A large multicenter, randomized clinical trial revealed no difference in the risk of endotracheal intubation requirement at 30 days between awake prone positioning and standard positioning for patients with COVID-19 who suffered from acute hypoxemic respiratory failure, according to research published in JAMA by researchers at UTHealth Houston.

Given the concern of limited resources during the COVID-19 pandemic, awake prone positioning, in which a non-intubated patient lies face down, was adopted as an intervention for patients with respiratory failure. When a patient is lying face down, the diseased portion, which is usually the posterior part of the lung, is no longer compressed due to gravity, which was thought to improve the overall oxygenation within the lungs.

“Prior to the COVID-19 pandemic, it had been reported sporadically as a rescue measure, in very few case reports in different parts of the world,” said Sujith Cherian, MD, associate professor of medicine with McGovern Medical School at UTHealth Houston and director of quality for pulmonary and critical care medicine at Harris Health Lyndon B. Johnson Hospital. “This strategy was a measure in several countries, and even recommended by several medical societies, to use as a measure to improve the oxygenation to see if it would reduce the need for invasive mechanical ventilation.”

With the absence of any evidence-based strategy to guide this approach, Cherian, principal investigator of the study, and co-investigator Rosa Estrada-y-Martin, MD, professor of medicine with McGovern Medical School, wanted to see what the effects were on reducing the need for being on a ventilator. Estrada-y-Martin is also medical director of pulmonary and critical care medicine at Harris Health LBJ, the site of the Houston arm of the study.

“Many patients that require ventilators with COVID-19 pneumonia didn't survive at the beginning of the pandemic,” said Estrada-y-Martin. “So, the idea was, what happens if we try to do something before they have to go to a ventilator?”

In addition to Harris Health LBJ, the only site in the U.S., the study was conducted at 20 other hospitals in Canada, Kuwait, and Saudi Arabia. It included adults who required at least 40% oxygen or non-invasive positive pressure ventilation and had not received invasive mechanical ventilation. The 400 patients were randomized to either the intervention group (205 participants; prone position 8-10 hours per day) or the control group (195 participants; no prone positioning). The primary outcome was endotracheal intubation within 30 days of randomization. The risk of endotracheal intubation did not significantly differ between groups (34% for prone versus 40% non-prone group) at 30 days, and the risk of mortality at 60 days was similar between the two groups (22.4% for prone versus 23.6% non-prone).

“Throughout my observation of the patients recruited for the study, it was becoming more obvious to me that the strategy helped only some patients, and it had a limited role in preventing patients from requiring mechanical ventilation,” said Cherian. “It will probably come as a surprise to several physicians because of just how widespread this measure was adopted in several countries all over the world. Moreover, one must keep in mind that it cannot be adopted as a uniform strategy in all patients and careful evaluation is necessary to identify who may benefit from this strategy.”