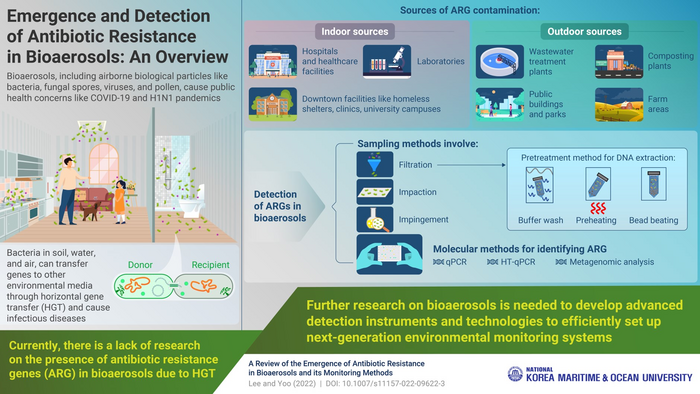 To shed more light, assistant professor Dr. Keunje Yoo and his colleague at Korea Maritime and Ocean University have collated existing knowledge on ARG in bioaerosols in a comprehensive review published in Reviews in Environmental Science and Bio/Technology.

Explaining the motivation behind this article, Yoo says, “We wanted to understand the driving force behind ARG in bioaerosols. We extensively reviewed data on the potential risk factors associated with AR in bioaerosols, their impact on human health, appropriate methodologies, and the latest technologies and advances in bioaerosol monitoring.”

So, what did they learn? Antibiotic-resistant bioaerosols are produced from several sources, categorized into either indoor or outdoor environments. Indoor environments include hospitals, healthcare facilities, laboratory buildings, and downtown facilities like offices, markets, universities, and kindergartens. The best way to detect these bioaerosols is through impaction, impingement, and filtration. Molecular and biotechnological methods including quantitative real time PCR (qPCR), high throughput qPCR, and high throughput sequencing techniques are also employed to evaluate the prevalence and levels of ARG in samples.

The World Health Organization has announced that the spread of AR is among the top ten global public health concerns facing humanity. It becomes essential to analyze the relationship between human, animal, and environmental microbiomes to counter the spread of AR.

Yoo concludes, “By identifying which bacteria generate and transfer AR and by understanding the interaction between host cells, environment, tissues, and pathogens at a molecular level, we move a step closer to finding targets in managing AR in the environment.”