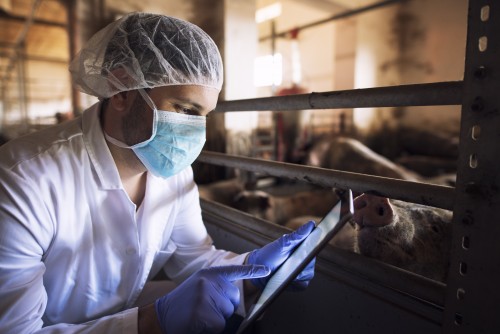 Justin Bernstein, PhD, senior author and an assistant professor in the Department of Philosophy. Courtesy of Adam Bernstein

As early as the Neolithic period (circa 3900 BC), the domestication of animals likely led to the development of diseases including measles and smallpox. Since then, zoonotic disease has led to other major transnational outbreaks including HIV, Ebola, SARS, MERS, and H1N1 swine flu, among others. Currently, more than half of all existing human pathogens, and almost three-quarters of emerging infectious diseases, are zoonotic in nature.

COVID-19 is the latest and most impactful zoonotic event of the modern era, but it will certainly not be the last. Given the breadth of these impacts and the fact that other zoonotic pandemics are highly likely - a matter of when and not if - the key public health ethics question that emerges is about whether it is ethically appropriate for governments to intervene to prevent future pandemics. And given that SARS, Swine Flu, and the Spanish Flu of 1918 (among other outbreaks of zoonotic diseases) all came from animal agriculture facilities, a concern with preventing future pandemics suggests re-examining the current global food system – in the name of protecting public health.

In an article published in the journal Food Ethics, Florida Atlantic University’s Justin Bernstein, PhD, senior author, an assistant professor in the Department of Philosophy within the Dorothy F. Schmidt College of Arts and Letters, and a member of the FAU Center for the Future Mind, which is sponsored by the FAU Brain Institute, and co-author Jan Dutkiewicz, PhD, a post-doctoral fellow at Concordia University, offer three plausible solutions to mitigate zoonotic risk associated with intensive animal agriculture. They explore incentivizing plant-based and cell-based animal source food alternatives through government subsidies, disincentivizing intensive animal source food production through the adoption of a “zoonotic tax,” and eliminating intensive animal source food production through a total ban.

“Modern medicine has not only failed to catch up to the zoonotic threat, but in some ways is losing ground, due in part to growing global antibiotic resistance. So, from a public health ethics perspective, we should assess measures aimed at mitigating zoonotic risks,” said Bernstein, whose expertise focuses on questions in moral and political philosophy and bioethics and the intersection of the two. “This is especially the case with systemic, predictable sources of zoonotic risk such as agriculture and food production. We argue that if the government may protect public health generally, then this permission extends to radically altering current animal agricultural practices.”

The first, and arguably least intrusive public health intervention the authors offer, involves incentivizing alternative choices. Second, they suggest that public health disincentivizes the relevant behavior that poses a public health risk by attaching costs to it. Given that animal source food production can lead to the outbreak of zoonotic disease that can harm both consumers and non-consumers, the authors argue that the goal of disincentivizing both production and consumption could be achieved by a Pigouvian tax – a “zoonotic tax” – on meat.

The third and most intrusive kind of intervention involves the government restricting or eliminating choices. In the context of mitigating the risk of zoonotic pandemics, the authors say that governments might consider making intensive animal agriculture illegal. Of course, given the disruption to food supply chains and both local and national economies, such a ban would have to be carefully and gradually enacted.

“While there are urgent short-term public health measures that can mitigate the devastating effects of the COVID-19 pandemic, we must not lose sight of how to prevent the devastation of a future pandemic. In response to the current pandemic, a natural thought is to focus on what public health agencies and local governments should focus on contact tracing, more tests, social distancing and adequate personal protection equipment,” said Bernstein. “Yet, while all of these approaches are invaluable, they are not truly preventative in that they do not address a root cause of future zoonotic risk: intensive animal agriculture.”

The authors note that the threat of another pandemic may be the right kind of consideration to motivate people to seriously re-examine current dietary practices, especially when they have witnessed firsthand just how devastating a pandemic can be.

“The risk of infectious disease associated with animal agriculture is often overlooked. The COVID-19 pandemic forces us to pay attention to food production and evaluate how to reduce similar outbreaks in the future in the interest of global, collective public health,” said Bernstein. “While the exact causes of this particular pandemic still require further investigation, we have highlighted the causal role of intensive animal agriculture in other pandemics and its contribution to increased risk of future zoonotic disease outbreaks.”