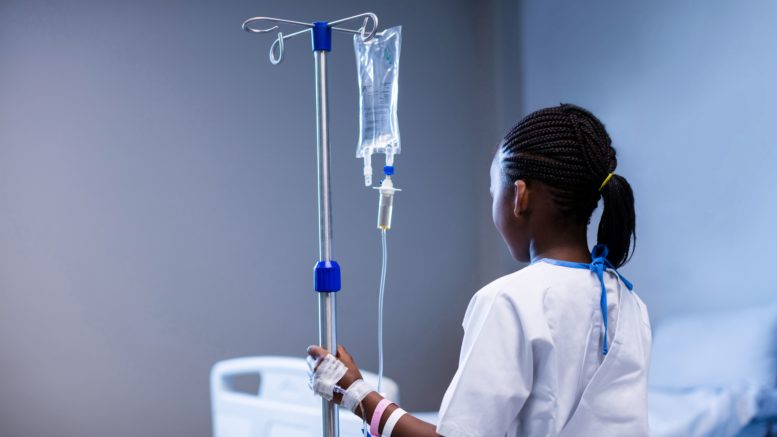 A new study provides convincing evidence that the use of peripherally inserted central catheters (PICCs) to administer medicine and draw blood in children is associated with a significantly increased risk of blood clots (known as venous thromboembolism or VTE) compared with central venous catheters (CVCs) placed directly into the neck or chest. The study results, published today in Blood, also reveal a significantly higher rate of CVC-related bloodstream infections and catheter malfunctions among pediatric patients receiving PICCs. Based on the findings, researchers are voicing concerns about the growing use of PICCs - and what appears to be a corresponding jump in VTE - in children who need a CVC.

Treating children with cancer, congenital heart disease, infections, or other serious health problems frequently requires the insertion of a catheter into a large central vein to allow medical teams to administer medications and draw blood for testing. PICCs have been used with increasing frequency because they can be quickly and easily inserted at the bedside by a nurse with light sedation. By contrast, insertion of a centrally placed line, or tunneled line (TL) is a more invasive, time-consuming and costly procedure in which a surgeon or interventional radiologist uses ultrasound or X-ray imaging to guide the insertion of the line, usually into the large vein in the neck, while the patient is under anesthesia.

The study, known as Clot Incidence Rates in Central Lines (CIRCLE), is the first multi-center, prospective, observational cohort study to compare VTEs in children with newly placed PICCs and TLs. The analysis included a total of 1,967 newly placed CVCs in 1,742 children aged six months to 18 years. CVC-related VTEs occurred in 6% of children overall within six months of follow up. Of the 94 VTEs observed, 75 (80%) were seen in children with PICCs. Children who received a PICC were 8.5 times more likely to develop a blood clot compared to those with a TL. The results corroborate evidence from an earlier interim analysis in a smaller cohort of patients that showed a disproportionally higher incidence of VTE in patients with PICCs versus those with TLs.

"Now we can say definitively that patients who have PICCs have a much higher rate of thrombosis as well as central line associated bloodstream infections and catheter malfunctions when compared to TLs," said senior study author Julie Jaffray, MD, of Children's Hospital Los Angeles and University of Southern California, adding that the research was conducted in response to a sharp increase over recent years in the incidence of VTE in children receiving CVCs. "PICCs are not as benign as we once thought."

She said this is also the first large study to take a comprehensive look at the incidence of VTE across multiple subgroups of children receiving CVCs in a real-world setting. Catheter-related blood clots were highest among patients with a prior history of VTE; VTE was also more likely among children receiving a larger caliber catheter carrying multiple lines (or lumens) and those with leukemia. Additionally, patients who had a line malfunction or an infection were more likely to have VTE.

Children who develop a VTE require anticoagulation therapy, which Jaffray explains is inconvenient to administer and carries an inherent risk of internal bleeding. VTE is also associated with prolonged hospitalizations, increased cost, and a higher likelihood of morbidity and death from pulmonary embolism. Jaffray said that as many as one in four pediatric patients with VTE develop post-thrombotic syndrome, a condition that can cause chronic pain, swelling, and other symptoms after a clot is resolved. Venous stenosis, in which the vein becomes constricted following VTE, is also a clinically significant complication as it can limit blood flow and make it harder to insert catheters in patients who need to undergo surgeries over the course of their treatment.

Jaffray says the observed incidence of PICC-related VTE is too high to justify their frequent use and adds that the results of the CIRCLE study should give pause to medical professionals who care for children requiring intravenous treatments, especially when central venous access is not absolutely necessary.

"Do all of the kids getting PICCs really need them?" asked Jaffray, whose work will help inform how CVCs are selected and used in children. The ultimate goal, she said, is to see if the use of PICCs can be reduced, perhaps in favor of using peripheral intravenous lines (those going into a vein in a limb) in patients who don't really need a CVC or using a more permanent central line in those whose medical condition demands ongoing access.

Jaffray and her team plan to conduct further additional analyses to assess whether the underlying reason for inserting the line - for example, chemotherapy, prolonged courses of antibiotics, or feeding - might play a role in the development of VTEs.