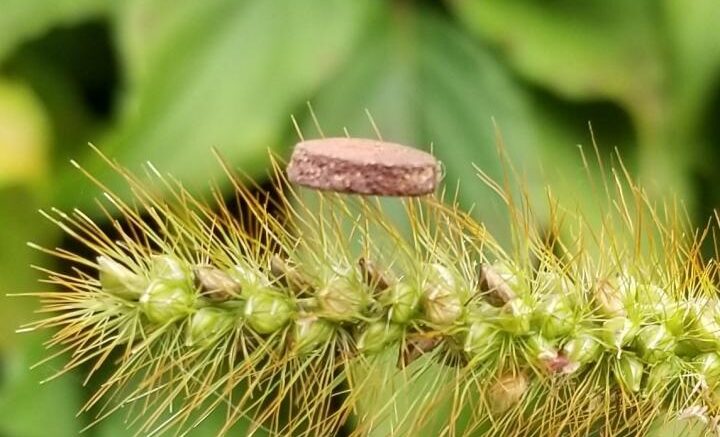 A copper-based foam filter that could someday be used in facemasks or air cleaners sits on the bristles of a plant, illustrating its light-weight nature. Adapted from Nano Letters 2021, DOI: 10.1021/acs.nanolett.1c00050

During the COVID-19 pandemic, people have grown accustomed to wearing facemasks, but many coverings are fragile and not easily disinfected. Metal foams are durable, and their small pores and large surface areas suggest they could effectively filter out microbes. Now, researchers reporting in ACS' Nano Letters have transformed copper nanowires into metal foams that could be used in facemasks and air filtration systems. The foams filter efficiently, decontaminate easily for reuse and are recyclable.

When a person with a respiratory infection, such as SARS-CoV-2, coughs or sneezes, they release small droplets and aerosolized particles into the air. Particles smaller than 0.3 μm can stay airborne for hours, so materials that can trap these tiny particles are ideal for use in facemasks and air filters. But some existing filter materials have drawbacks. For example, fiberglass, carbon nanotubes and polypropylene fibers are not durable enough to undergo repeated decontamination procedures, while some further rely on electrostatics so they can't be washed, leading to large amounts of waste. Recently, researchers have developed metallic foams with microscopic pores that are stronger and more resistant to deformation, solvents, and high temperatures and pressures. So, Kai Liu and colleagues wanted to develop and test copper foams to see if they could effectively remove submicron-sized aerosols while also being durable enough to be decontaminated and reused.

The researchers fabricated metal foams by harvesting electrodeposited copper nanowires and casting them into a free-standing 3D network, which was solidified with heat to form strong bonds. A second copper layer was added to further strengthen the material. In tests, the copper foam held its form when pressurized and at high air speeds, suggesting it's durable for reusable facemasks or air filters and could be cleaned with washing or compressed air. The team found the metal foams had excellent filtration efficiency for particles within the 0.1-1.6 μm size range, which is relevant for filtering out SARS-CoV-2. Their most effective material was a 2.5 mm-thick version, with copper taking up 15% of the volume. This foam had a large surface area and trapped 97% of 0.1-0.4 μm aerosolized salt particles, which are commonly used in facemask tests. According to the team's calculations, the breathability of their foams was generally comparable to that of commercially available polypropylene N95 facemasks. Because the new material is copper-based, the filters should be resistant to cleaning agents, allowing for many disinfection options, and its antimicrobial properties will help kill trapped bacteria and viruses, say the researchers. In addition, they are recyclable. The researchers estimate that the materials would cost around $2 per mask at present, and disinfection and reuse would extend their lifetime, making them economically competitive with current products.