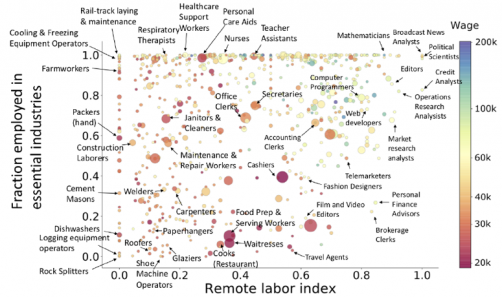 Workers in the lower left quadrant work in “non-essential” industries and also cannot work from home and are thus more vulnerable to loss of employment. They also tend to be on the lower end of the wage scale (red/orange color). Courtesy of Rio-Chanona, et. al. (2020)

The U.S. is likely to see a near-term 24% drop in employment, 17% percent drop in wages, and 22% drop in economic activity as a result of the COVID-19 crisis according to a new study from the University of Oxford. The study further shows that these impacts will be very unevenly distributed, with the bottom quarter of earners at risk of a 42% loss in employment and bearing a 30% share of total wage losses. In contrast, the study estimates the top quarter of earners only risk a 7% drop in employment and an 18% share of wage losses.

Professor J. Doyne Farmer, a Santa Fe Institute professor who led the research at the Institute for New Economic Thinking at the Oxford Martin School, said, “We are experiencing a depression-level event and this study shows how unevenly its shocks will be felt. Policymakers need to urgently ensure that lower and middle-income workers are protected from these blows.”

The study, which appears CEPR COVID Economics, an online peer-reviewed journal set up to quickly disseminate scholarly work on the crisis, differs in its method from other recent analyses, including the recently released IMF forecasts. While most analyses to date have looked at the economy “top-down”, the Oxford study built its estimates “bottom-up.” The team looked at every occupation in the U.S. economy and assessed which specific occupations could be carried out at home during the lockdowns and which cannot, and which specific industries are considered “essential” and thus remained open during lockdowns, and which ones are not. By connecting these data sets they were able to construct a detailed picture of how the “supply shock” of social distancing measures would impact the economy (see figure).

In addition, to the supply shock of workers unable to work, there are many occupations and industries affected by “demand shocks”. For example, aircraft mechanics are considered essential and allowed to work, but have much less work to do as demand for air travel has plummeted. Finally, the researchers also looked at “positive shocks” where demand for certain occupations and sectors, notably in healthcare, has gone up.

The team also examined the wages of the different occupations affected and found that not only were low wage workers more likely become unemployed and experience wage declines, but as many low wage essential jobs cannot be done from home (e.g. cleaners), they were also more likely to be exposed to the virus.

By combining the supply, demand, and positive shocks, the researchers were able to construct an overall picture of the likely impact on the economy, finding that the net effects were on a scale not seen since the Great Depression. For example, the Oxford forecast of the COVID-19 U.S. employment drop is 24% versus 3.3% during the 2007-2009 Great Recession, and 22% during the 1929-1933 peak of the Great Depression.

The Oxford team emphasizes that its forecast only includes the immediate “first-order” shocks from social distancing measures and does not include “second-order” effects whereby as unemployment grows and incomes drop, demand drops further, leading to additional waves of layoffs and business bankruptcies. Thus, without strong and urgent policy interventions, the impacts will potentially be significantly greater than those experienced during the Great Depression.

The study helps clarify priorities for policymakers. For most sectors, the largest shocks are on the supply side—people not being able to work—rather than people not being able to consume. Thus, as the virus is contained, strategies for returning people to work as quickly as possible without endangering public health must be a priority. In the meantime, policies to keep workers in employment and maintain incomes (e.g. the “paycheck protection” schemes announced by several countries) are essential. Finally, the inequalities highlighted by the study will require policy responses to ensure that the burdens of the crisis are fairly shared.

Be the first to comment on "COVID-19 U.S. Employment Shocks Likely Larger Than Great Depression"