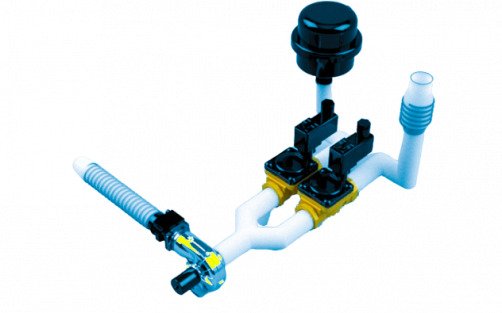 Rendering of the core internal components of NumaVent’s proposed $500 ventilator. Courtesy of NumaVent

A team of university students and engineers has developed a low-cost ventilator using off-the-shelf components that is designed to aid patients with varying degrees of lung failure. They are responding to an acute shortage of these life-saving medical devices due to the spread of COVID-19.

NumaVent, a non-profit start-up that includes New York University, Johns Hopkins University, and University of Southern California students and engineers, has created a ventilator at an estimated cost of $500—well below the $25,000-to-$50,000 price tag for conventional ventilators—by drawing from readily available materials, such as: DC Fans, pressure sensors, and solenoid valves.

Significantly, it aims to aid patients with varying degrees of lung failure with a device that requires minimal training—a crucial feature as healthcare personnel are increasingly taxed. Many “off-the shelf” designs currently in development will only be able to effectively deliver oxygen to patients who are entirely incapable of breathing on their own -- and even these may pose significant safety risks.

“These ventilators are likely to be rendered useless if a patient can still partially breathe, an overwhelmingly common scenario that radically changes the required functionality,” says Numavent’s president and CEO Daniil Frants, a junior at NYU who is majoring in computer science, mathematics, and physics. “We think we’ve identified the optimal balance between a solution that is too complex to be manufactured quickly, affordably, and at scale, and one that is too simple to be of use to the majority of patients.”

Specifically, NumaVent is designed to accommodate a wide range of patient breathing patterns through an array of sensors and can be used for virtually any patient requiring ventilation due to complications from COVID-19.

The team, which is currently seeking funding for its work, is now prototyping and testing its design in order to prepare it for large-scale manufacturing; it is also in the process of seeking Emergency Use Authorization from the FDA.

Approximately 30 percent of patients hospitalized with COVID-19 symptoms will require mechanical ventilation, according to some estimates. Meanwhile, countries around the world are dealing with a shortage of ventilators, which will soon become critical. It is estimated that the US alone will need 960,000 ventilators, while the current projections put global demand at 22 million ventilators.

Frants, a social innovations entrepreneur, sought to create an affordable ventilator from the ground up, attracting like-minded students and engineers to help develop the technology.

Within two weeks NumaVent had put together a significantly simplified design for a ventilator built from off-the-shelf components.

NumaVent has received a grant of $25,000 from Differential Ventures to prototype and test the device. The team plans to open-source the ventilator and provide it at-cost to medical institutions and governments.