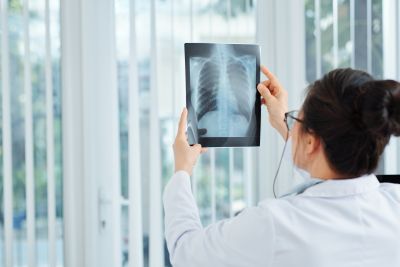 University Health Network has performed what is believed to be the first lung transplant in Canada on a patient whose lungs were irreparably damaged by COVID-19.

Timothy Edwards Sauvé, 61, contracted the disease in December and was referred to UHN for a transplant assessment about two months later. After a careful assessment by a multi-disciplinary team in the Toronto Lung Transplant Program at UHN's Ajmera Transplant Centre, Sauvé was listed and received the life-saving organ in February.

"It's been quite a journey, and I'm very thankful to my medical team and to my donor," says Sauvé who had no prior comorbidities that would put him at higher risk for infection or complications from the disease. "I was in great physical shape so I never thought I would get so sick from COVID. It still doesn't seem real to me, and I hope my story will show people how dangerous this disease can be."

Sauvé developed cold-like symptoms and screened positive for COVID-19 back in December. In a matter of days, the disease progressed, and he was hospitalized.

As oxygen levels went down, he needed support from a mechanical breathing machine (ventilator) - which ultimately was also not enough to keep him alive.

Once transferred to Toronto General Hospital, at UHN, he eventually needed the advanced lung support therapy called extracorporeal membrane oxygenation (ECMO) -- which is essentially a machine that pumps and oxygenates the blood outside of the body providing healing time and relief to damaged lungs.

"A few weeks after he cleared the virus, it was very clear from his scans that Mr. Sauvé's lungs were severely and permanently damaged, and would not recover. His only chance of survival would be by receiving a transplant," says Dr. Marcelo Cypel, surgical director at the Ajmera Transplant Centre and the surgeon who led the team performing the transplant.

Cypel says transplant is certainly a life saving treatment for a very small subgroup of COVID patients. However, with variants of concern increasingly infecting younger healthier patients during this third wave of the pandemic, the number of transplant referrals may grow. The program is currently evaluating three additional COVID patients for transplantation candidacy.

There have been few cases of lung transplant after COVID reported around the world, as it is only a recommended therapy in exceptional circumstances.

The majority of patients who develop severe COVID infection are usually not candidates for transplant, since other risk factors and complications from the disease would significantly compromise the chances of success for such a major surgery.

"Transplant is not a cure for COVID," says Dr. Shaf Keshavjee, director of the Toronto Lung Transplant Program. "In this case, with ECMO support and intense rehabilitation, we were very happy to see it provided a second chance of life for Mr. Sauvé. Given the nature of COVID infections, transplant is only recommended in exceptional conditions - where the lungs are truly destroyed from the disease without hope of recovery, and the patient is strong enough to go through a lung transplant."

Cypel and Keshavjee have authored a scientific paper published in Lancet Respiratory Medicine that explored considerations for transplant assessment.

Sauvé was an ideal candidate for transplantation as he had no other comorbidities, and no other organs were significantly impacted by the COVID infection. Despite being on ECMO, he was awake and able to understand the implications and risks of transplantation.

"We had one-on-one lengthy conversations so he understood the long road ahead of him, of the recovery journey after surgery, and the immunosuppression that comes with any transplant," says Dr. Stephen Juvet, a transplant respirologist at UHN who was part of the team looking after Sauvé.

While no longer critically ill, patients that have spent prolonged time in hospital often require a period of inpatient rehabilitation to regain their strength before transitioning home. Breathing with new lungs is one thing, but it can take time to work up the stamina and energy to use those lungs and re-train one's muscles to complete everyday tasks.

After his transplant, Timothy Sauvé is recovering well. His lung function is excellent and he no longer requires any oxygen support.

He has been transferred to UHN's Toronto Rehab Bickle Centre, where an active multidisciplinary team is helping him improve his mobility, lung function and quality of life.

"Our primary goal is to improve a patient's independence and function. We learn about their home environment, interests, support system and hobbies to work with them to get back to the activities they enjoy," explains physiatrist Dr. Alexandra Rendely. "We want to add life to the years that the transplant has afforded them."