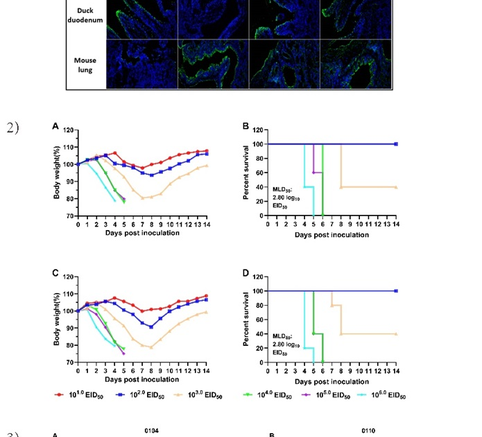 The first known H10 avian influenza virus (AIV) was isolated from chicken in Germany in 1949 and has undergone multiple reassortment events during decades of circulation. Many H10-subtype AIVs, including H10N1, H10N2, H10N3, H10N6, H10N7, H10N8, and H10N9, are widely distributed in domestic and wild birds. H10-subtype AIVs circulate not only in poultry but have spread to mammals such as minks, pigs, and seals. Transmission of H10-subtype AIVs from birds to humans is uncommon but has occurred. The first reported human infections with a H10 subtype influenza virus occurred in Egypt in 2004. In subsequent surveillance, cross-species transmission of subtype H10 influenza virus has been detected occasionally. Remarkably, three patients were reportedly infected with the H10N8 subtype influenza virus in China in 2013, two of the infected patients died. The National Health Commission of the People's Republic of China confirmed the first case of human infection with H10N3 subtype AIV in Zhenjiang, Jiangsu Province, in April 2021. The epidemiological investigation did not find that the patient had a clear history of exposure to the live poultry market, and the H10N3 virus of the same genotype was not isolated locally, so the source of infection could not be determined. This poses a great challenge to prevent the recurrence of human infections with H10N3.

“Tracing the source of the human-origin H10N3 virus and systematic analysis of its biological characteristics are the prerequisites for preventing H10N3 from re-infecting humans.” said associate professor, Xiaoquan, Wang, the co-corresponding author of this work.

During surveillance activities for avian influenza in live bird markets (LBMs) in Eastern China from 2019 to 2021, the research team isolated several avian H10N3 viruses, and these strains were highly homologous to human-origin H10N3 strain. In this study, two avian-origin H10N3 viruses were first isolated from Jiangsu Province in December 2019, indicating that this type of virus has been silently circulating in poultry for at least 17 months before causing human infections. Phylogenetic analysis revealed that the HA and NA sequences, which belonged to the Eurasian lineage, were derived from H10N8 and H7N3, respectively, and were prevalent in Zhejiang province; whereas the internal genes of H10N3 were all derived from H9N2 AIVs. Interestingly, H9N2 AIVs have become dominant in LBMs in China in recent years and donate internal genes for human isolates such as H7N9, H10N8 and H5N6. The first species barrier is host cell attachment. AIVs preferentially bind to SAα-2,3-Gal, whereas human-adapted viruses have been shown to favor SAα-2,6-Gal. These H10N3 strains presented affinities to both avian-type and human-type receptors. AIVs can transmit to new species, but without long-term adaptation in mammals, most AIVs show low pathogenicity in mice. In this study, the two novel reassortant H10N3 isolates were highly pathogenic in mice and replicated efficiently in multiple organs without prior adaptation. AIV acquires the ability for continuous transmission between humans was the key to a pandemic. This study showed that infected guinea pig models could shed high virus loads through the respiratory tract and could transmit the virus via both direct contact and aerosols.

This finding illustrates that the novel reassortment H10N3 isolates exhibited comparable binding affinity for both avian-type and human-type receptors and lethal infection of mice. Furthermore, it displayed efficient transmission via both direct contact and aerosolization in guinea pig models, suggesting that the novel reassortment H10N3 subtype AIV poses a high threat to public health.

“LPAIVs usually cause no explicit symptoms in poultry; thus, human outbreaks may occur when poultry infections go unnoticed. Therefore, continuous surveillance for the emergence and evolution of novel AIVs in poultry and evaluation of their potential threat to public health is necessary.” said Xiufan Liu, the corresponding author of this work.