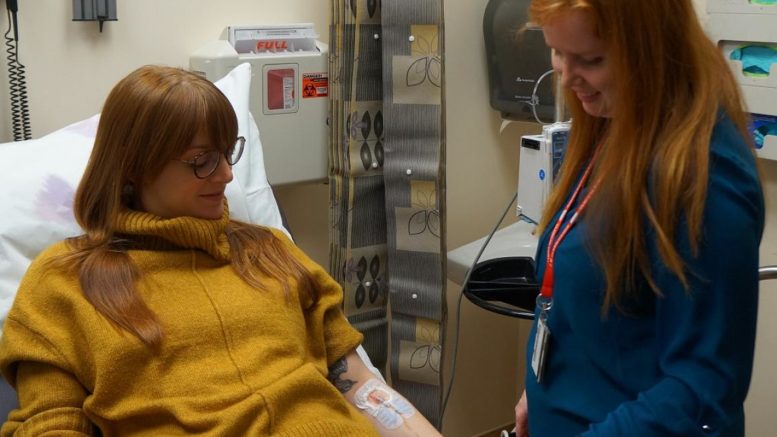 NIAID research nurse Jennifer Cunningham, BSN, looks on as a healthy volunteer receives an infusion of CIS43LS, an experimental monoclonal antibody against malaria, as part of a Phase 1 clinical trial. Courtesy of NIAID

A Phase 1 clinical trial testing the safety and effectiveness of a monoclonal antibody (mAb) against malaria has begun enrolling healthy adult volunteers at the National Institutes of Health Clinical Center in Bethesda, Maryland. The trial, sponsored by NIH’s National Institute of Allergy and Infectious Diseases (NIAID), is the first to test mAb CIS43LS in humans. It aims to enroll up to 73 volunteers aged 18 through 50 years old who have never had malaria. After receiving mAb CIS43LS, most of the volunteers will be exposed to malaria parasite-carrying mosquitoes under carefully controlled conditions at the Walter Reed National Military Medical Center in Bethesda, Md. to assess the ability of the mAb to confer protection from malaria infection.

“If proven safe and effective in this study and in larger trials, this monoclonal antibody might be used prophylactically by tourists, medical workers or military personnel who travel to areas where malaria is common,” said NIAID director Anthony S. Fauci, MD. “In the absence of a highly effective, long-lasting vaccine, preventing malaria infections for several months with a single dose of monoclonal antibody also could be valuable in specific parts of Africa where malaria cases increase greatly during annual rainy seasons,” he added.

Several years ago, Robert Seder, MD, and colleagues at NIAID’s Vaccine Research Center (VRC) isolated an antibody (CIS43) from the blood of a volunteer who had received an investigational vaccine made from whole, weakened malaria parasites. When tested in two different mouse models of malaria infection, CIS43 was highly effective at preventing infection by the deadliest malaria parasite, Plasmodium falciparum, the team reported in 2018. Modifications to CIS43 yielded mAb CIS43LS, which lasts longer in the blood than the original antibody. CIS43LS was manufactured for clinical use by the VRC’s investigational product Vaccine Production Program and the NIAID-funded Vaccine Clinical Material Program of Leidos Biomedical Research, Inc., under a contract to the National Cancer Institute’s Frederick National Laboratory for Cancer Research.

Most of the study volunteers will then take part in a controlled human malaria infection, which will occur between 10 days and 10 weeks after CIS43LS administration. Volunteers will be exposed via mosquito bites to a strain of malaria parasite (P. falciparum 3D7) that is readily curable with two standard anti-malarial medications. Close and frequent monitoring of volunteers after challenge will include use of the most sensitive test for detection of early malaria infection, so that drug therapy can begin promptly and continue until the infection is cured in any volunteers who become infected. Infection may be detected and treated even before symptoms occur. Volunteers who do not develop infection will nevertheless receive a short course of anti-malarial medication 28 days after the challenge.

“In addition to acquiring data about the safety and tolerability mAb CIS43LS, we will also gather data about the blood levels of this mAb that are associated with protection from malaria, which may allow us to determine optimum dosage levels needed to achieve clinical protection from infection,” said the trial’s principal investigator, VRC scientist Martin Gaudinski, MD.