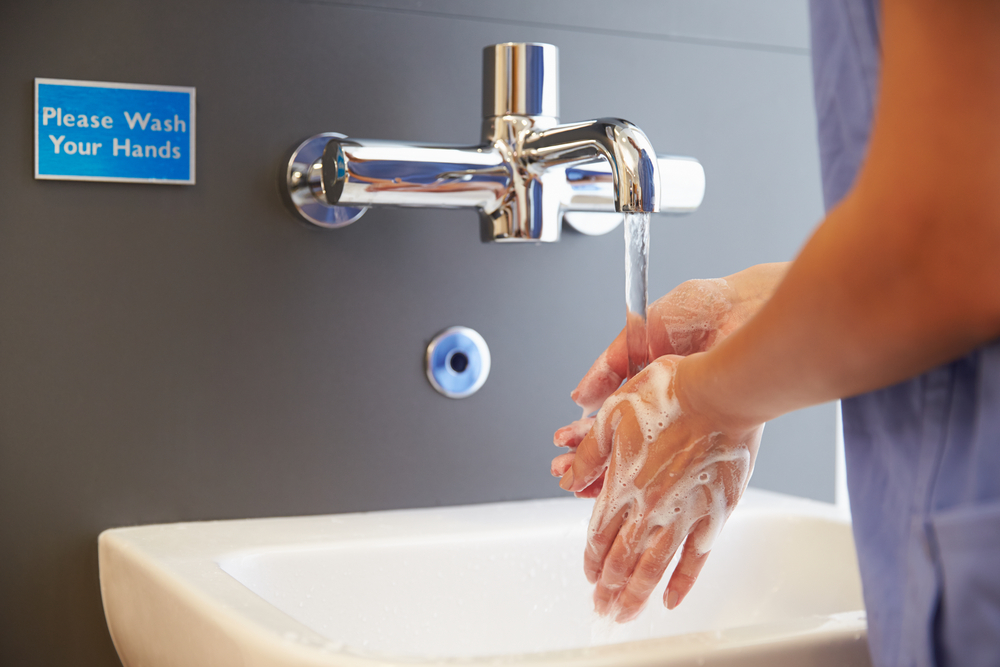 Hospital Faucets are Often Home to Slime and Biofilm

Researchers at the University of Michigan Health System assessed eight different designs across four intensive care units to determine how dirty sinks and faucets really are. They found that a shallow depth of the sink bowl enabled potentially contaminated water to splash onto patient care items, healthcare worker hands, and into patient care spaces – at times at a distance of more than four feet from the sink itself.

“The inside of faucets where you can’t clean were much dirtier than expected,” said study author Kristen VanderElzen, MPH, CIC. “Potentially hazardous germs in and around sinks present a quandary for infection preventionists, since having accessible sinks for handwashing is so integral to everything we promote. Acting on the information we found, we have undertaken a comprehensive faucet replacement program across our hospital.”

Hand hygiene is a critical component of infection prevention in hospitals, but the unintended consequences include water splashing out of a sink to spread contaminants from dirty faucets according to new research presented in mid-June at the 46th Annual Conference of the Association for Professionals in Infection Control and Epidemiology (APIC).

To identify the grime level of the sinks, the researchers used adenosine triphosphate (ATP) monitoring to measure the cleanliness. Visible biofilm was associated with higher ATP readings, and cultures tested over the course of the study grew Pseudomonas aeruginosa, mold, and other environmental organisms.

The research team also found aerators on sinks where they had previously been removed, pointing to an overall inconsistency of equipment protocols across the facility. Included in the design improvement program were sink guards, which were shown to limit splash significantly.

“As we learn more about the often stealthy ways in which germs can spread inside healthcare facilities, infection preventionists play an increasingly important role in healthcare facility design – including in the selection of sink and faucet fixtures – as this study illustrates,” said 2019 APIC president Karen Hoffmann, RN, MS, CIC, FSHEA, FAPIC. “Because the healthcare environment can serve as a source of resistant organisms capable of causing dangerous infections, an organization’s infection prevention and control program must ensure that measures are in place to reduce the risk of transmission from environmental sources and monitor compliance with those measures.”

Poor quality handwashing contributes to the spread of nosocomial infections. Lacey, et al. (2019) investigated the impact of automatic video auditing (AVA) with feedback on the quality and quantity of handwashing in a hospital setting.

The researchers conclude that AVA with real-time feedback significantly improved the quality and quantity of handwashing. The combination of AVA with electronic monitoring will allow simultaneous auditing of hand hygiene quantity and quality. The impact of cognitive offloading onto the technology may have contributed to the return to baseline at the end of the study, and suggests further research is required in this area.

Reference: Lacey G, et al. The impact of automatic video auditing with real-time feedback on the quality and quantity of handwash events in a hospital setting. American Journal of Infection Control. July 27, 2019

The handwash station: friend or fiend?

Handwashing is a key barrier to cross-infection performed at a handwash station (HWS, an interface between water and drainage systems). Widespread and often uncritical placement/design and use of HWSs is not without attendant risks. Recognition of the associated hazards went unheeded for over 45 years despite warnings in the literature, until the neonatal outbreak of pseudomonas in Belfast in 2012 forced change. Minimizing risk requires a holistic approach beyond the mere testing of water from the outlet of a HWS for the presence of Pseudomonas aeruginosa or other pathogens. Literature reports of outbreaks linked to HWSs outside of neonatal units are over-represented by multi-resistant organisms, and increasingly by carbapenemase-producing organisms. Evidence suggests that a large proportion of waterborne transmissions go undetected. Much could be done to improve current design, use and placement of HWSs, and this is assessed critically in this article.

Handwashing is viewed as one of the most important barriers to cross-infection, performed using either alcohol gel or soap (detergent) and water at a handwash station (HWS). The latter is required when hands are visibly soiled, or following contact with organisms that are not susceptible to the antibacterial properties of alcohol.

Semmelweis introduced the concept of handwashing in 1847. The early HWSs consisted of a jug containing a solution of lime (calcium hypochlorite) and a bowl. This evolved into the plumbed-in HWS, the basic design of which has changed little over the centuries.

In 2012, the neonatal intensive therapy unit (ITU) outbreak of Pseudomonas aeruginosa in Belfast changed, overnight, the way in which water would be managed in UK hospitals, particularly regarding HWSs. The periphery of the water system became recognized as a risk, and is unique being an interface between water and drainage systems.

Water is bacteria's kingdom and biofilm (honed for three billion years) is their adaptation to an aqueous environment. It is biofilm which thwarts our ability to provide microbiologically safe water in buildings.

The purpose of this article by Weinbren is to critically examine the design and attendant risks of HWSs.