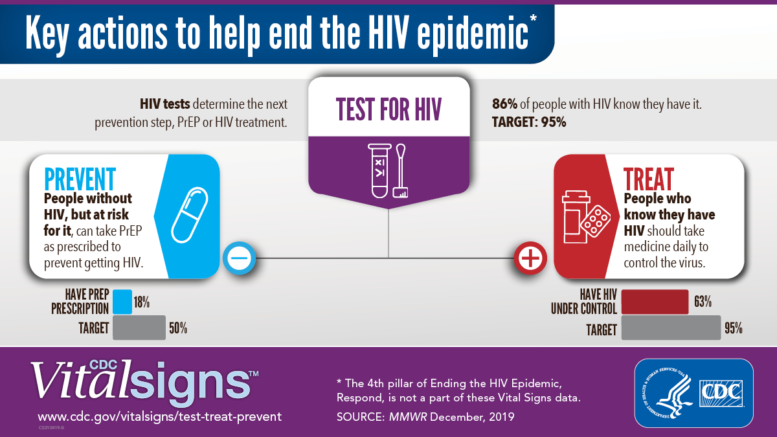 Far too many Americans with HIV are unaware that they have it. Far too few have the virus under control through effective treatment. And far too few Americans are taking the daily pill that prevents HIV.

The findings – showing that progress in reducing new HIV infections in the United States has stalled in recent years – come in a new CDC Vital Signs report published today.

The report shows that increasing HIV testing, treatment, and prevention is critical to stopping HIV transmission in the United States. In addition, health disparities must be addressed to achieve the goals of Ending the HIV Epidemic: A Plan for America, a proposed federal initiative to reduce new HIV infections by 90 percent by 2030.

“The time is now to end HIV in America. We have the right tools, the right data and the right leadership to get this done,” said CDC director Robert R. Redfield, MD. “Those living with HIV are our best teachers. They are key to helping us reach people where they are so that we can better diagnose and link patients to care.”

According to the Vital Signs:
HIV Testing and Treatment in 2017:
• About 154,000 people with HIV (14%) were unaware of their status and therefore could not take advantage of HIV treatment to stay healthy, control the virus, and prevent transmitting HIV to others. Young people ages 13 to 24 were less likely to know their HIV status than those age 25 and older.
• Only two-thirds (63%) of those who knew they had HIV had the virus under control through effective treatment. Young people and African Americans were least likely to have the virus under control.

Pre-Exposure Prophylaxis (PrEP) in 2018:
• About 18% (219,700) of the 1.2 million people who could benefit from PrEP, a daily pill that prevents HIV, had received a prescription for the medication. Coverage was especially low among young people, African Americans, and Latinos who could benefit from PrEP.
• This analysis captured data from 92% of all prescriptions from U.S. retail pharmacies, but did not include prescriptions from closed health care systems, such as managed care organizations and military health plans. Therefore, PrEP coverage was likely higher than these estimates.

If it is funded, the Ending the HIV Epidemic initiative will substantially increase resources, technology, and expertise where they’re needed most.

“The number of people who acquire HIV each year is unacceptably high,” said Jonathan Mermin, MD, MPH, director of CDC’s National Center for HIV/AIDS, Viral Hepatitis, and STD Prevention. “Ending this epidemic would be one of the greatest public health triumphs in our nation’s history.”

To achieve maximum impact, the initiative will focus first on 50 local areas that account for over half of new HIV diagnoses (48 counties; San Juan, Puerto Rico; and Washington, D.C.), and seven states with a substantial rural burden. If additional resources become available, the initiative will eventually expand nationwide. The initiative will scale up four science-based strategies that can end the epidemic:

• Diagnose all people with HIV as early as possible, with a target of diagnosing at least 95% of HIV infections.

• Prevent new HIV transmissions by using proven interventions, including PrEP and syringe services programs (SSPs). For PrEP, the target is for at least 50% of those who could benefit from it to receive a prescription.

• Respond quickly to potential HIV outbreaks to get needed prevention and treatment services to people who need them.

The U.S. Department of Health and Human Services (HHS) and its agencies are taking action now to ensure the initiative can hit the ground running if it is funded in 2020. HHS has already provided funding to enable three communities (Baltimore City, Md.; DeKalb County, Ga.; and East Baton Rouge Parish, La.) to jumpstart key parts of the initiative, and to share lessons learned with other communities.

HHS has also funded local efforts to develop Ending the HIV Epidemic plans in all priority geographic areas. The plans are based on input from the community, HIV planning bodies, healthcare providers and others.

What can everyone do to help end the nation’s HIV epidemic?
• Get tested for HIV
• Learn your risk at www.cdc.gov/hivrisk
• Talk with your healthcare provider about HIV prevention, including PrEP
• Stay healthy by taking your medicine if you have HIV or are on PrEP

Through Ending the HIV Epidemic, the CDC will work closely with other HHS agencies, local and state governments, communities, and people with HIV to coordinate efforts to expand key HIV prevention strategies.

Be the first to comment on "HIV Testing, Treatment and Prevention Not Reaching Enough Americans"