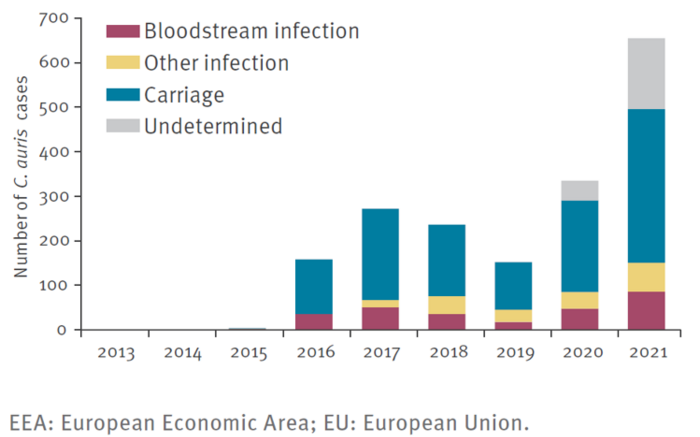 Most of reported Candida auris cases were carriage. Courtesy of Eurosurveillance

The European Centre for Disease Prevention and Control (ECDC) has been conducting surveys to collect information on the epidemiological situation of C. auris in the European Union and European Economic Area (EU/EEA). In their rapid communication published in Eurosurveillance to mark European Antibiotic Awareness Day, Kohlenberg et al. analyze the data for the years 2013 to 2021 collected from the three ECDC surveys.

Almost two-thirds (63%) of cases were reported as carriage, 15% as bloodstream infections and 10% as another type of infection. For 11% of cases, there was no available information on either carriage or infection. Cases and C. auris outbreaks occurred in several EU/EEA countries only a few years after the first cases were reported. In two countries spread of C. auris between healthcare facilities was documented.

In one region in one country, C. auris is endemic, meaning that infections and colonisations did not only occur as part of defined outbreaks. Additionally, the authors express concern about the possibility of undetected transmission and outbreaks in the EU/EEA because in four countries there was no available information at national level on whether C. auris cases were present in the country or not.

Compared to 2019, the findings from the survey indicate a slight improvement in preparedness and response in EU/EEA countries regarding prospective and retrospective surveillance, identifying and testing for the pathogen in laboratories as well as guidance for laboratory testing and for infection prevention and control.

However, given the inter-facility spread as well as endemicity in one region, Kohlenberg et al. discuss that C. auris is in the process of establishing itself as a healthcare-associated pathogen in the EU/EEA. The authors state that this, together with the high proportion (97%) of cases with no information on importation or local spread, underlines the need to further improve monitoring and surveillance of C. auris infections and outbreaks.

Kohlenberg et al. state that "Local control of C. auris as soon as possible after introduction to delay the establishment of C. auris in healthcare facilities will have a nationwide benefit for patients by reducing future healthcare-associated infections with C. auris."

They conclude that early detection of C. auris is crucial since disease control becomes more challenging when the infection has already spread between healthcare facilities or regions.