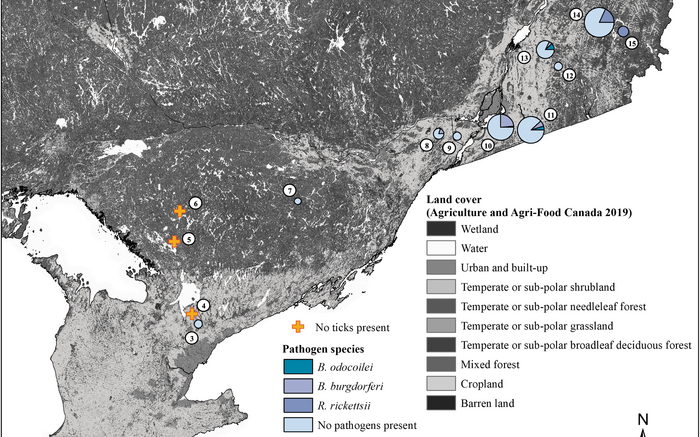 Tick-borne pathogens, known for causing illnesses such as Lyme disease, are on the rise in Central Canada – presenting new risks in areas where they were never previously detected.

The findings from researchers at McGill University and the University of Ottawa demonstrate the need for more comprehensive testing and tracking to detect the spread and potential risk of tick-borne pathogens to human and wildlife populations throughout Canada.

“Most people know that diseases can be transmitted to humans through the bite of infected ticks. Ticks can carry and spread several disease agents that can make people and animals sick,” explains Kirsten Crandall, a PhD candidate under the joint supervision of McGill University professor Virginie Millien and University of Ottawa professor Jeremy Kerr.

To investigate the presence and prevalence of several emerging tick-borne pathogens, Crandall and her team analyzed small mammals and ticks collected in Ontario and Quebec. The researchers found that five emerging pathogens were present across their study sites in Central Canada, including the pathogens causing Lyme disease and babesiosis, a malaria-like parasitic disease.

They discovered that two pathogens, Babesia odocoilei and Rickettsia rickettsii, were detected outside of their historic geographic range in Quebec. These pathogens spread both babesiosis and Rocky Mountain spotted fever. “The presence of these pathogens changes the risk of disease for Canadians and animals in some densely populated areas of Canada,” says Crandall.

Typically, pathogens are transmitted to a tick after feeding from the blood of an infected host, like a small mammal. However, the researchers found evidence of pathogens that could spread in other ways. Babesia odocoilei and Rickettsia rickettsii can also be directly transmitted from adult female ticks to larval ticks. Additionally, small mammals like mice can transmit the parasite Hepatozoon after ingesting an infected insect, spider, or tick.

“It’s challenging to assess the spread of certain emerging or re-emerging tick-borne pathogens, as many of them are not reported to public health agencies in Canada,” says Crandall. “Only two tick-borne pathogens are listed as nationally notifiable diseases in Canada: Lyme disease (Borrelia burgdorferi) and tularemia (Francisella tularensis). However, we are seeing increased cases of diseases like anaplasmosis and babesiosis in humans in Canada.”

According to the researchers, the spread of emerging tick-borne pathogens has steadily increased in Canada because of climate change, habitat fragmentation, and changes in the abundance of tick populations and their hosts.

“If we don’t know that pathogens are present, we can’t equip Canadians with the information they need to protect themselves. COVID has diverted public health resources away from challenges like this one, and we need to remember that these tick-borne diseases are on the move too,” adds Jeremy Kerr, a Professor and Research Chair in University of Ottawa’s Department of Biology.

“It’s an immense endeavour to track in real time the emergence of these pathogens across Canada, and this is when field research like ours can contribute significantly. The work of our student is a beautiful reminder that fundamental research matters, and in this case, can play a role in public health,” says Virginie Millien, an associate professor at the Redpath Museum at McGill University.