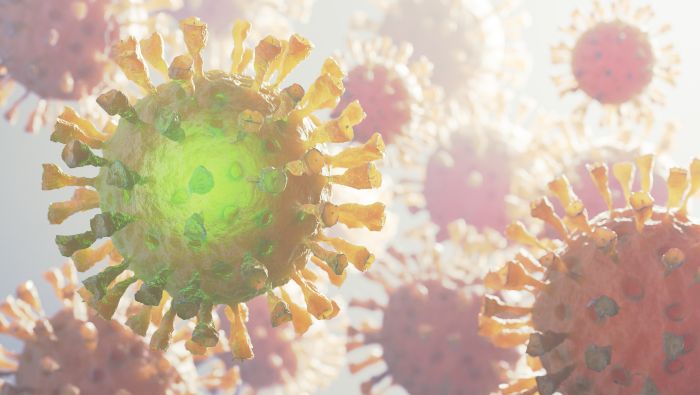 The SARS-CoV-2 virus can lose 90% of infectivity when in aerosol particles within 20 minutes, according to new University of Bristol findings. The study, published in the journal of the Proceedings of the National Academy of Sciences (PNAS), is the first to investigate the decrease in infectivity of SARS-CoV-2 in aerosol particles over periods from seconds to a few minutes. The aim of the study was to explore the process that could change viral infectivity over short timescales following exhalation.

Scientists from Bristol’s Schools of Chemistry, Vet School and Cellular and Molecular Medicine, sought to gain a detailed understanding of the factors which regulate the survival of airborne SARS-CoV-2 inhalable particles, and how infectivity is affected by environmental conditions such as relative humidity (RH) and temperature. RH measures how much water vapor (moisture) there is in the air compared to how much there could be at that temperature. Ideally, healthy indoor RH levels are between 40% to 60%.

Using a novel instrument called CELEBS (Controlled Electrodynamic Levitation and Extraction of Bioaerosols onto a Substrate), the team were able to probe the survival of SARS-CoV-2 in laboratory generated airborne particles and examine how temperature and humidity drive changes in infectivity, from timescales spanning five seconds to 20 minutes. The same experiment was carried out comparing four different SARS-CoV-2 variants, including Alpha and Beta.

Results from the team’s experiments found a significant loss in infectivity within the first ten minutes of aerosol particle generation that is strongly dependent on the environmental relative humidity, but not temperature. This effect did not alter across the different SARS-CoV-2 variants.

The team observed a decrease in airborne infectivity at low relative humidity (<50%) that occurs almost immediately, falling to 50% within ten seconds of aerosol generation. This loss occurs when the airborne particles dry and rapidly lose moisture, forming a solid particle. At high relative humidity, the loss in infectivity following aerosolization is more gradual, with a steady loss of infectivity of 50% within the first 5 minutes and 90% within 20 minutes. This loss is due to a significant increase in aerosol particle pH.

Jonathan Reid, the study’s lead author, director of Bristol Aerosol Research Centre and Professor of Physical Chemistry in the School of Chemistry at the University of Bristol, said, “We know that aerosol particles, exhaled when infected individuals breathe, speak or cough, can transmit viruses. Understanding the mechanisms that influence the survival of pathogens while airborne is a further piece of the jigsaw puzzle in understanding the spread of diseases such as COVID-19. Using model systems in the laboratory, we have been able to identify these two processes that can lead to the rapid loss in infectivity of the SARS-CoV-2 virus at early time. It should also be remembered that there can be a 1,000-fold variation in exhaled aerosol mass and 10,000-fold variation of SARS-CoV-2 exhaled viral load between individuals. All of this reminds us of the things we don’t yet understand and, along with epidemiological studies, the importance of using appropriate mitigations to reduce aerosol transmission including face masks, physical distancing and ventilation."