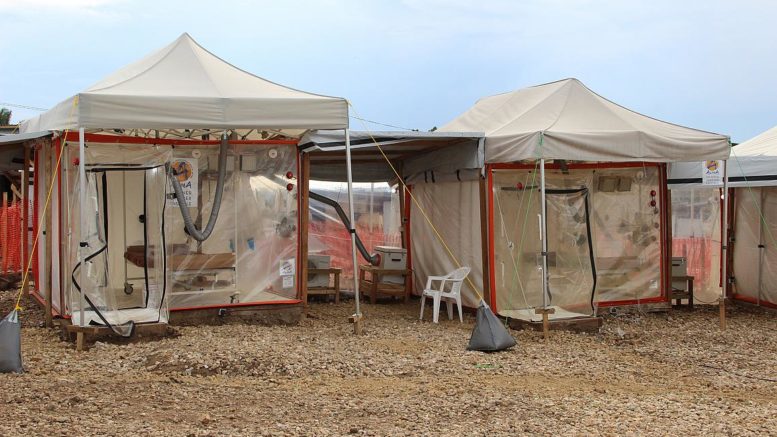 The Ebola treatment center (ETC) in Beni, Democratic Republic of the Congo. Operated by The Alliance for International Medical Action (ALIMA), the Beni ETC enrolled patients in the PALM study of Ebola therapeutics. The ETC is now operated by MSF.

The investigational therapeutics mAb114 and REGN-EB3 offer patients a greater chance of surviving Ebola virus disease (EVD) compared to the investigational treatment ZMapp, according to published results from a clinical trial conducted in the Democratic Republic of the Congo (DRC). The new report also shows that early diagnosis and treatment are associated with an increased likelihood of survival from EVD.

The results appear online this week in the New England Journal of Medicine. An announcement made on Aug. 12, 2019, noted that the study leaders halted the trial early, on Aug. 9, 2019, as recommended by an independent data and safety monitoring board based on its review of preliminary data from 499 study patients. The preliminary analysis found that both mAb114 and REGN-EB3 performed better than ZMapp. The fourth drug, remdesivir, performed similarly to ZMapp. Today’s publication provides a comprehensive analysis of the full dataset from nearly 200 additional patients enrolled in the clinical study.

The clinical trial known as PALM, short for “Pamoja Tulinde Maisha,” a Kiswahili phrase that translates to “together save lives,” was organized by an international research consortium coordinated by the World Health Organization (WHO). It is led and funded by the DRC’s National Institute for Biomedical Research (INRB) and Ministry of Health, and the National Institute of Allergy and Infectious Diseases (NIAID), part of the U.S. National Institutes of Health. Professor Jean-Jacques Muyembe-Tamfum, MD, Ph.D., director-general of the INRB and head of the DRC’s Ebola response, and Richard T. Davey, Jr., MD, deputy director of NIAID’s Division of Clinical Research, are co-principal investigators for the study.

“Response teams have faced unprecedented challenges in ongoing efforts to save lives and control the outbreak of Ebola in a highly insecure region of the Democratic Republic of the Congo,” said NIAID director Anthony S. Fauci, MD. “Although effective treatments alone will not end this outbreak, the PALM study findings identify the first efficacious treatments for Ebola virus disease and therefore mark a significant step forward in improving care for Ebola patients. We thank the study team for their extraordinary efforts to conduct this landmark trial.”

The study enrolled 681 people with Ebola virus disease between November 2018 and August 2019 at four Ebola treatment centers (ETCs) in the cities of Beni, Butembo, Katwa and Mangina. Staff from The Alliance for International Medical Action (ALIMA), International Medical Corps (IMC), Médecins Sans Frontières/Doctors Without Borders (MSF) and the DRC Ministry of Health implemented the trial at the ETCs with support from Congolese staff, the World Health Organization, the Frederick National Laboratory for Cancer Research and The Mitchell Group.

The study was designed to compare mortality among patients who received one of three investigational Ebola drugs with that from a control group of patients who received the investigational monoclonal antibody cocktail ZMapp, developed by Mapp Biopharmaceutical, Inc. The other therapies were mAb114, a single monoclonal antibody product developed for clinical use by NIAID’s Vaccine Research Center and the INRB and licensed to Ridgeback Biotherapeutics and Mapp Biopharmaceutical; REGN-EB3, a monoclonal antibody cocktail developed by Regeneron Pharmaceuticals, Inc.; and remdesivir, an antiviral drug developed by Gilead Sciences, Inc. The Biomedical Advanced Research and Development Authority (BARDA), part of the U.S. Department of Health and Human Services, also has provided support for the development of REGN-EB3, ZMapp and mAb114.

The final analysis included 673 participants. The trial began in November 2018 with randomized administration of remdesivir, mAb114 and ZMapp, and the protocol was amended to include REGN-EB3 in January 2019. As a result, the number of outcomes included in the ZMapp comparator group was slightly different for the initial arms (remdesivir and mAb114) relative to the number of outcomes in the ZMapp comparator group for REGN-EB3, based on time of enrollment. Overall mortality was 50% (84/169) in all patients treated with ZMapp and 51% (79/154) in patients who received ZMapp during the time that REGN-EB3 was included as another trial arm. Mortality rates were lower for mAb114 and REGN-EB3 compared to their respective ZMapp cohorts: 35% (61/174) of patients in the mAb114 treatment group and 34% (52/155) of patients in the REGN-EB3 group died by 28 days post-treatment. The mortality rate in the remdesivir treatment group, 53% (93/175), was similar to ZMapp.

“These results bring more than hope, they show what powerful tools we have now to save lives in the Democratic Republic of the Congo, and in future Ebola outbreaks. We must make sure everyone affected by the virus knows about these treatments and is able to access them,” said WHO director-general, Dr. Tedros Adhanom Ghebreyesus.

“The PALM trial results confirm that it is extremely important for people who have symptoms of Ebola to go to a treatment center as soon as possible to receive advanced supportive care and life-saving therapeutics and increase their chances of survival,” said Muyembe.

All four study drugs were generally well tolerated. There were a total of four serious adverse events that were judged to be potentially related to the experimental drugs. Three of these were in two of the patients who received ZMapp. One was in a patient who received remdesivir.

The authors note that despite encouraging findings regarding mAb114 and REGN-EB3, approximately one-third of patients who received these therapeutics died, highlighting the potential to improve upon these results, whether through further optimization of supportive care, combination therapy using agents with complementary mechanisms of action or other strategies.

“Despite unprecedented challenges — including an unstable electrical power grid and evacuations of staff and patients from treatment centers due to violent attacks — the PALM trial demonstrates that scientifically rigorous and ethically sound clinical research can be conducted during disease outbreaks,” said H. Clifford Lane, MD, NIAID deputy director for Clinical Research and Special Projects. “We thank the patients and the medical staff in the field and at the treatment sites for their participation and exceptional commitment to the trial.”