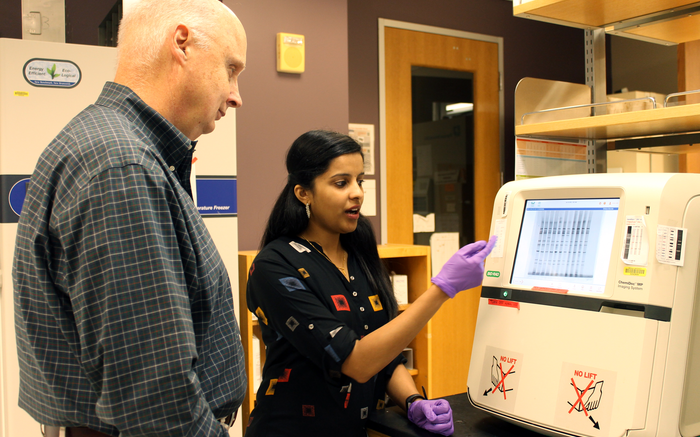 Indiana University will further develop a new technology for a combination oral rotavirus-norovirus vaccine for infants, thanks to a $1.2 million grant from venture capital firm GIVAX Inc.

The technology, first developed by IU Bloomington College of Arts and Sciences biology professor John Patton and graduate student Asha Philip, changes the readily available rotavirus vaccine to also protect against norovirus, a highly contagious virus that can cause severe vomiting and diarrhea in young children.

"We like to think of it as a vaccine for the world," Patton said. "The children that are the most at risk of dying from these viral infections are in developing countries. We're modifying a vaccine that is already widely used, giving it greater potential. We think this has strong advantages over other potential options, where you have to use needles and have trained personnel deliver it."

In the U.S. and most parts of the world, children are vaccinated soon after birth against rotavirus, another severe diarrheal disease, using an oral vaccine. The new technology will use the current rotavirus vaccine as a platform to drive the production of norovirus proteins as well, which trigger an antibody response from the immune system.

"The rotavirus vaccine is easily produced and can be administered by those with minimal medical training," Patton said. "The rotavirus vaccine has been very effective in reducing viral gastroenteritis in infants and young children. We would like to take this simple vaccine and turn it into something that is more powerful and has the potential to prevent childhood infectious diseases beyond rotavirus gastroenteritis."

Patton and his colleagues chose norovirus for the first combination oral vaccine because it would significantly reduce the amount of severe diarrheal illness occurring in infants and young children throughout the world.

But norovirus is notoriously difficult to cultivate in the lab, which has been a major impediment to the development of a norovirus vaccine through more traditional routes, Patton said.

"We cannot grow norovirus in standard laboratory cell lines, which limits the possibility of making vaccines from purified norovirus that has been inactivated by chemical treatment, a common longstanding approach for making viral vaccines, including those against flu and polio," he said. "However, experiments have shown that it is possible to change rotavirus so it can express proteins against other pathogens. With our new technology, the fact that we cannot grow norovirus in cell culture is not an issue, as instead we can rely on the rotavirus vaccine as an expression platform of norovirus proteins in the immunized child.

Patton said a combination rotavirus and norovirus oral vaccine would not only give the world a measure of defense against both viruses; it would also be easy to distribute and implement. Rotavirus vaccines are already used throughout much of the world, so the necessary distribution channels already exist. And because needles and injections are not required, there is no need for a medical professional to administer these vaccines, reducing the cost of an immunization program. Rotavirus vaccines do not have special storage or temperature requirements, so freezers and reliable electrical service are not a necessity, which can be key for widespread use of the vaccine in developing countries.

Once the rotavirus platform technology is fully developed and its effectiveness has been studied and verified, Patton and his colleagues hope to expand the idea and make new generations of combination vaccines that will protect against other pathogens in babies and even adults.