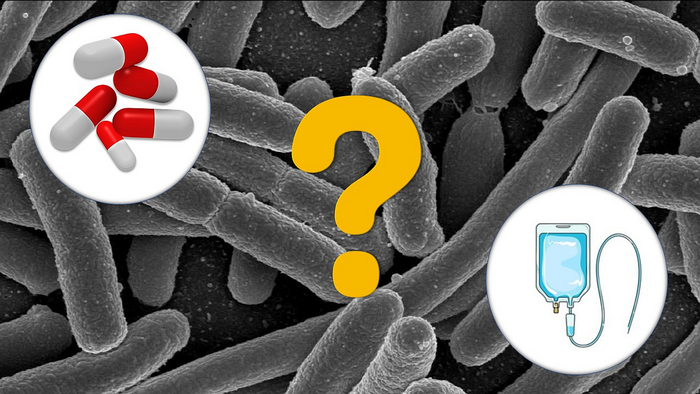 PCORI has awarded $10 million to Johns Hopkins Medicine to see if early transition to oral antibiotic therapy from IV administration improves outcomes for patients with gram-negative bloodstream infections, such as the pathogenic Escherichia coli seen in the background. Courtesy of M.E. Newman, Johns Hopkins Medicine

PCORI is an independent, nonprofit organization authorized by Congress in 2010. According to the institute, its mission is “to fund research that will provide patients, their caregivers and clinicians with the evidence-based information needed to make better informed healthcare decisions.”

The award will support a randomized controlled clinical trial at eight U.S. hospitals involving a study population of approximately 1,200 patients with bloodstream infections caused by gram-negative bacteria, such as Escherichia coli.

Gram-negative bacteria are organisms that are not colorized by the Gram staining method used to differentiate bacteria into two distinct groups: gram positive and gram negative.

“Traditionally, gram-negative bloodstream infections have been treated with intravenous [IV] antibiotics for the duration of a patient’s therapy — either in the hospital or with placement of a vascular catheter to continue treatment at home or a skilled nursing facility,” says Tamma. “However, because vascular catheters used to place IV lines can pose a risk of a secondary infection and other complications, and because IV therapy imposes limitations on patient mobility and quality of life, we want to see if oral antibiotic treatment — pills — given at an early stage in the process could achieve outcomes on par with those of IV antibiotics.”

In their clinical trial, Cosgrove, Tamma and colleagues will randomize patients into one of two groups: those who receive IV antibiotics for the entire duration of therapy and those who start with IV therapy followed by early transition to oral antibiotics for the remainder of the treatment course.

The study, says Tamma, will be conducted at eight hospitals strategically selected because they meet the following criteria: a mix of urban, suburban and rural populations; geographic distribution across the United States; racially and ethnically diverse populations; and the necessary infrastructure to participate in a large randomized controlled trial.

The investigators, says Cosgrove, will use a novel analytical approach to determine efficacy and safety, using criteria developed by both patients and healthcare providers. “This will enable us to define the optimal treatment approach for patients with gram-negative bloodstream infections,” she explains.