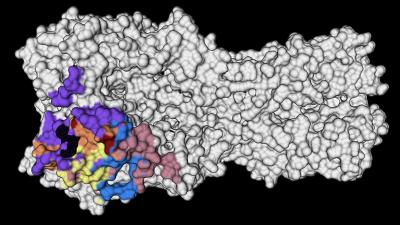 Hemagglutinin (HA) is a protein on the surface of the influenza virus that attaches to receptors on host cells. A new study shows how antibodies that target conserved, stable portions of HA, shown in the colored portions here, were highly effective at fighting the virus. Courtesy of Guthmiller et al.

A new study from the University of Chicago and Scripps Research Institute shows that during the last great pandemic--2009's H1N1 influenza pandemic--people developed strong, effective immune responses to stable, conserved parts of the virus. This suggests a strategy for developing universal flu vaccines that are designed to generate those same responses, instead of targeting parts of the virus that tend to evolve rapidly and require a new vaccine every year.

Influenza is an elusive and frustrating target for vaccines. There are two main types of flu virus that can infect humans, which evolve rapidly from season to season. When developing seasonal flu vaccines, health officials try to anticipate the predominant variation of the virus that will circulate that year. These predictions are often slightly off. Sometimes new, unexpected variants emerge, which means the vaccine may not be very effective. To avoid this, the ultimate goal of many flu researchers is to develop a universal vaccine that can account for any virus strain or variation in a given year, or even longer.

The new study, published June 2 in Science Translational Medicine, was led by UChicago immunologists Jenna Guthmiller, PhD, and Patrick Wilson, PhD, along with structural biologists Julianna Han, PhD, and Andrew Ward, PhD, from Scripps Research Institute. They studied the immune responses of people who were first exposed to the 2009 H1N1 pandemic flu virus, either from infection or a vaccine.

The researchers saw that the immune systems of these people recalled memory B cells from their childhood that produced broadly neutralizing antibodies against highly conserved parts on the head of a protein called hemagglutinin (HA) -- a virus surface protein that attaches to receptors on host cells. These antibody responses were very effective at combatting the virus, and because they targeted conserved parts of the HA protein--meaning they don't change very often--they could provide an enticing target for a vaccine to generate those same robust immune responses.

In a separate 2020 study, Guthmiller and colleagues found so-called polyreactive antibodies that can bind to several conserved sites on the flu virus. Now, the new study reveals more details about the conditions that can recall the same strong immune responses as this first exposure.

"That's the exciting thing about this study," Guthmilller said. "Not only have we found these broadly neutralizing antibodies, but now we know of a way to actually induce them."

The only problem is that on subsequent encounters with the virus or a vaccine, the body doesn't generate those same super-effective antibodies. Instead, for reasons that are unclear, the immune system tends to target newer variations on the virus. That may be effective at the time, but isn't very helpful down the road when another, slightly different version of influenza comes along.

"When people encounter that virus a second or third time, their antibody response is pretty much completely dominated by antibodies against those more variable parts of the virus," Guthmiller said. "So that's the uphill battle that we continue to face with this."

The trick to getting around this is to design a vaccine that recreates that initial encounter with H1N1, using a version of the HA protein that keeps the conserved, powerful antibody-inducing components, and replaces the variable parts with other molecules that won't distract the immune system.

"Structural studies were essential to delineate the conserved areas on the HA protein," said Han, who was co-first author of the new study and received her doctorate from the Committee on Microbiology at UChicago. "Now these data can be used to fine-tune vaccine targets."

In roughly the past century, two of the four flu pandemics have been caused by H1N1 influenza, including the 1918 Spanish flu pandemic that killed as many as 100 million people. Yet the findings of this study are reassuring in the fight against possible future pandemics caused by other H1 viruses.

"The odds of there being another pandemic within our lifetime caused by an H1 virus is quite high," Guthmiller said. "Just knowing that we actually have the immune toolkit ready to protect ourselves is encouraging. Now it's just a matter of getting the right vaccine to do that."