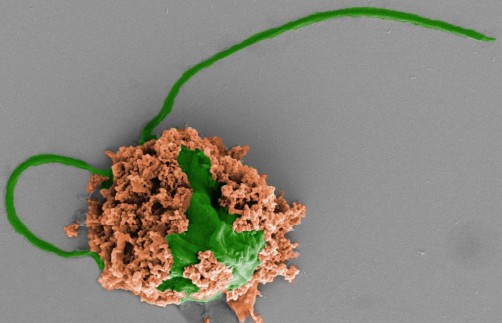 Colored SEM image of a pneumonia-fighting microrobot made of an algae cell (green) covered with biodegradable polymer nanoparticles (brown). The nanoparticles contain antibiotics and are coated with neutrophil cell membranes. Courtesy of Fangyu Zhang and Zhengxing Li

Nanoengineers at the University of California San Diego have developed microscopic robots, called microrobots, that can swim around in the lungs, deliver medication and be used to clear up life-threatening cases of bacterial pneumonia.

In mice, the microrobots safely eliminated pneumonia-causing bacteria in the lungs and resulted in 100% survival. By contrast, untreated mice all died within three days after infection. The results are published Sept. 22 in Nature Materials.

The microrobots are made of algae cells whose surfaces are speckled with antibiotic-filled nanoparticles. The algae provide movement, which allows the microrobots to swim around and deliver antibiotics directly to more bacteria in the lungs. The nanoparticles containing the antibiotics are made of tiny biodegradable polymer spheres that are coated with the cell membranes of neutrophils, which are a type of white blood cell. What’s special about these cell membranes is that they absorb and neutralize inflammatory molecules produced by bacteria and the body’s immune system. This gives the microrobots the ability to reduce harmful inflammation, which in turn makes them more effective at fighting lung infection.

The work is a joint effort between the labs of nanoengineering professors Joseph Wang and Liangfang Zhang, both at the UC San Diego Jacobs School of Engineering. Wang is a world leader in the field of micro- and nanorobotics research, while Zhang is a world leader in developing cell-mimicking nanoparticles for treating infections and diseases. Together, they have pioneered the development of tiny drug-delivering robots that can be safely used in live animals to treat bacterial infections in the stomach and blood. Treating bacterial lung infections is the latest in their line of work.

“Our goal is to do targeted drug delivery into more challenging parts of the body, like the lungs. And we want to do it in a way that is safe, easy, biocompatible and long lasting,” said Zhang. “That is what we’ve demonstrated in this work.”

The team used the microrobots to treat mice with an acute and potentially fatal form of pneumonia caused by the bacteria Pseudomonas aeruginosa. This form of pneumonia commonly affects patients who receive mechanical ventilation in the intensive care unit. The researchers administered the microrobots to the lungs of the mice through a tube inserted in the windpipe. The infections fully cleared up after one week. All mice treated with the microrobots survived past 30 days, while untreated mice died within three days.

The team’s approach is so effective because it puts the medication right where it needs to go rather than diffusing it through the rest of the body.

“With an IV injection, sometimes only a very small fraction of antibiotics will get into the lungs. That’s why many current antibiotic treatments for pneumonia don’t work as well as needed, leading to very high mortality rates in the sickest patients,” said Victor Nizet, professor at UC San Diego School of Medicine and Skaggs School of Pharmacy and Pharmaceutical Sciences, who is a co-author on the study and a physician-scientist collaborator of Wang and Zhang. “Based on these mouse data, we see that the microrobots could potentially improve antibiotic penetration to kill bacterial pathogens and save more patients’ lives.”

And if the thought of putting algae cells in your lungs makes you squeamish, the researchers say that this approach is safe. After treatment, the body’s immune cells efficiently digest the algae, along with any remaining nanoparticles. “Nothing toxic is left behind,” said Wang.

The work is still at the proof-of-concept stage. The team plans to do more basic research to understand exactly how the microrobots interact with the immune system. Next steps also include studies to validate the microrobot treatment and scaling it up before testing it in larger animals and eventually, in humans.