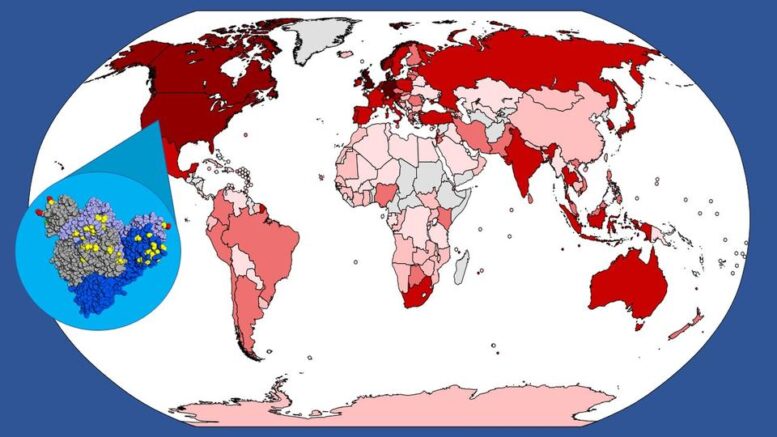 People who gained immunity — either through vaccination or exposure — against the original strain of SARS-CoV-2, the virus that causes COVID-19, also are likely to have some protection against the pathogen’s omicron variant. That’s because the mutations that led to the variant’s emergence aren’t found in the regions of the virus that stimulates one type of cellular immune response, says an international research team from Johns Hopkins Medicine, in collaboration with the National Institute of Allergy and Infectious Diseases (NIAID) and ImmunoScape, a U.S.-Singapore biotechnology company.

However, the researchers caution that their finding only relates to one type of cell-mediated immunity — the body’s defense against invaders that doesn’t involve circulating antibodies — and that it may be the antibody-related immune response (known as humoral immunity) that fails when omicron causes so-called breakthrough infections.

“We found in a January 2021 study that in people previously infected with the original COVID strain, specific epitopes [portions of a protein that elicit an immune response] from the virus are recognized by immune system cells known as CD8+ T lymphocytes, or killer T cells, and that this recognition enables a cell-mediated attack on COVID,” says study lead author Andrew Redd, PhD, assistant professor of medicine at the Johns Hopkins University School of Medicine and staff scientist at NIAID. “In our latest work, we found that these epitopes remained virtually untouched by the mutations found in the omicron variant. Therefore, the CD8+ T cell response to omicron should be virtually as strong as it was to the initial form of SARS-CoV-2.”

Other research groups in the United States and South Africa have demonstrated very similar results for people previously infected by or vaccinated against the original SARS-CoV-2 strain.

CD8+ T cells are nicknamed killer T cells (they’re also known as cytotoxic T cells) for their ability to eliminate foreign invaders such as bacteria and viruses from the body. The T cells used in the latest study were from blood samples collected in 2020 from 30 patients who had recovered from mild to moderate cases of COVID-19. The convalescent plasma donors had six human leukocyte antigens (cell-surface proteins that regulate the immune system and are part of each person’s genetic profile), Redd says, that are representative of greater than 73% of the U.S. population.

“This suggests that a significant portion of Americans who have been vaccinated against or exposed to the original strain of SARS-CoV-2 might have cytotoxic T cells that can produce an immune response to omicron,” says study senior author Aaron Tobian, MD, PhD, director of the transfusion medicine division and professor of pathology at the Johns Hopkins University School of Medicine.

The blood samples used in this study — initially acquired for the research team’s earlier study of immune response in patients who were convalescent — were taken from 26 to 62 days after the donors stopped having COVID-19 symptoms. This enabled the donors’ immune response to the virus to be fully mature and yield CD8+ T cells primed against it. The samples were stored after the researchers measured the T cell response.

During that assessment, donor samples were sent to ImmunoScape for the difficult task of identifying which T cells had responded to SARS-CoV-2. More specifically, the company’s deep immune cell profiling method showed which virus proteins elicited a T cell-directed response — data that could provide valuable insight into the T cells’ functional properties.

In the original analysis, the blood samples were probed with 408 different SARS-CoV-2 epitopes from spikes on the virus surface, from the virus capsule and from nonstructural proteins inside the virus. The researchers found that T cells from the convalescent donors recognized 52 of the 408 epitopes.

Redd says that in the latest study, the researchers examined the 52 epitopes previously identified in the convalescent blood samples to determine if they had been altered by escape mutations — genetic changes that would enable the virus to avoid being susceptible to cell-mediated immunity.

“We only found one low-prevalence epitope from the omicron spike protein that had a minor change from its predecessor in the original virus,” says Redd. “Overall, the omicron variant is known to have some 50-plus mutational differences between it and the original SARS-CoV-2 strain, but it seems the virus has not evolved the ability to avoid T cell recognition.”

While significant cell-mediated immunity appears to have been maintained from the original SARS-CoV-2 through its subsequent variants, Redd, Tobian and their colleagues say more research is needed to fully define why people who have this protection may still get sick from omicron.

Along with Redd and Tobian, the members of the study team from Johns Hopkins Medicine are Evan Bloch, Oliver Laeyendecker and Thomas Quinn. Co-authors are Brian Abel, Michael Fehlings, Hassen Kared and Alessandra Nardin from ImmunoScape, and Andrew Pekosz from the Johns Hopkins Bloomberg School of Public Health.

Abel, Fehlings, Kared and Nardin were ImmunoScape shareholders and/or employees when the January 2021 study was conducted, and Nardin is a board director for the company.