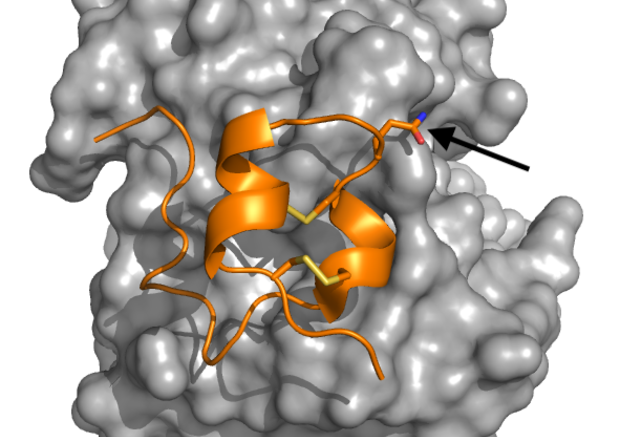 The engineered RSV G protein, with the RSV G antigen in orange and the human antibody in grey. The arrow points to the place where the researchers engineered the antigen, doing so while not affecting its ability to bind to the antibody. Courtesy of Rebecca DuBois

Close interactions with infectious disease set both University of California, Santa Cruz graduate student Ana Nuñez Castrejon and associate professor of biomolecular engineering Rebecca DuBois on the path of studying respiratory syncytial virus (RSV), a common and sometimes dangerous respiratory disease for which there is not currently a vaccine. The two researchers recently marked a major milestone in their effort to create an effective vaccine for the virus with the publishing of their paper “Structure-based design and antigenic validation of respiratory syncytial virus G immunogens” in the Journal of Virology.

For fifth-year Baskin Engineering student and the paper’s lead author Nuñez Castrejon, a bout of pneumonia that lingered for months when she was an undergraduate student sparked her interest in studying respiratory illnesses. For DuBois, watching her child go through a serious infection of RSV, which can cause severe respiratory infections in infants/children and the elderly, led her to study the disease.

“We have all of these wonderful childhood vaccines that have eliminated so much childhood disease, but there are still a lot of infectious diseases that are really tough on children, and RSV is one of those that causes hospitalizations in children,” DuBois said.

Now, the team focuses on bioengineering the structure of RSV’s G protein, which attaches the virus to host cells. The researchers altered the structure of the protein to eliminate its negative effects and while still eliciting a protective response from the immune system in the form of antibodies that bind to the G protein.

“My paper shows that the engineered mutation in the protein doesn't disrupt the ability of antibodies to bind it, so when it is used as a vaccine antigen it is possible to elicit these protective antibodies in animal models, and hopefully in the future people will be protected from the disease,” Nuñez Castrejon said.

This paper is similar to a 2017 publication crucial in the creation of the COVID-19 vaccine which described how to bioengineer the coronavirus’s Spike antigen to induce more and better antibodies, a strategy that was used to create to design the Moderna, Pfizer, J&J, and Novavax vaccine Spike antigens. Both papers use structural biology to ensure that an engineered version of a virus can be recognized by the immune system to fight the actual virus.

“This is the same kind of foundational work that allowed scientists to design the coronavirus vaccine so quickly and enable it to look exactly like it does on the surface of the virus, and even better,” DuBois said. “I think what people are coming to realize is that we can make vaccines that stimulate immune responses that are better than you get from infection, if we can engineer the antigens in a way that really exposes the weaknesses of the virus.”

Research in DuBois’s lab differs from other efforts to develop a RSV vaccine in their approach to studying the virus’s proteins. Many researchers are focused on altering the structure of the RSV F protein, which fuses the virus and host cell membranes together to get the virus’s genetic information into cells.

But late-stage clinical trials of vaccines using this approach show only a 60 percent to 70 percent protection against infection, which is promising but lower than what would be hoped for for an important pathogen like RSV.

In the short term, the researchers are looking to further analyze results from collaborators at the University of Georgia as to how their engineered protein affected disease symptoms in mice, and will continue to engineer the RSV G protein to produce stronger immune responses. In the next five years, they hope to develop an RSV vaccine using their engineered protein that is ready for clinical trials.

DuBois and Castrejon Nuñez are also collaborating with the biotechnology company Trellis Bioscience, which is investigating the use of monoclonal antibodies to treat infants with RSV infection and severe lung congestion.