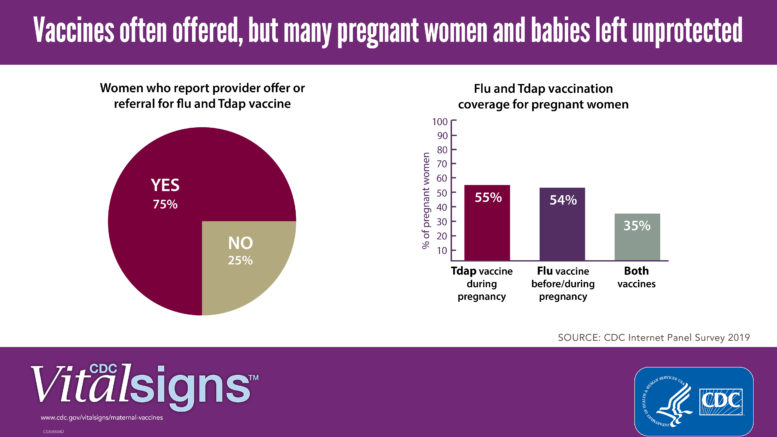 The majority of mothers-to-be in the United States – 65% – have not received two safe and effective vaccines recommended during pregnancy to reduce the risks of influenza (flu) and whooping cough (pertussis) and protect their infants and themselves, according to a new Vital Signs report released today by the Centers for Disease Control and Prevention (CDC).

When pregnant women are vaccinated they pass on antibodies to the fetus that provide protection after birth, during the time babies are too young to be vaccinated. Newborns who get influenza or whooping cough are at high risk of hospitalization and death.

The benefits are not just for the babies. Pregnant women have more than double the risk of hospitalization compared to nonpregnant women of childbearing age if they get influenza. Since 2010, among women ages 15 to 44 years who were hospitalized for influenza, 24% to 34% of them were pregnant – even though only approximately 9% of U.S. women in this age group are pregnant at any given time each year.

“I want to reinforce that all expectant mothers should be up-to-date with recommended vaccinations as part of their routine prenatal care,” said CDC director Robert Redfield, MD. “CDC strongly recommends that health care providers speak with moms-to-be about the benefits of safe Tdap and flu vaccination for their health and the well-being of their babies.”

CDC surveyed nearly 2,100 women ages 18 to 49 who were pregnant any time between August 2018 and April 2019. Among the survey findings:
• 54% of pregnant women reported getting a flu vaccine before or during pregnancy.
• 55% of women reported receiving Tdap during pregnancy.
• Women whose health care providers offered or referred them for vaccination had the highest vaccination rates.
• Black, non-Hispanic women had lower vaccination rates than women of other races and were less likely to report a health care provider offer or referral for vaccination.

Every year, too many U.S. babies or their mothers get vaccine-preventable diseases

A recent study showed that getting a flu shot reduces a pregnant woman’s risk of being hospitalized due to influenza by an average of 40%. Influenza is also dangerous for babies, especially those younger than 6 months, who are too young to get a flu shot. Babies under 6 months have the highest incidence of influenza-associated hospitalizations and highest risk of influenza-related death among children. Flu vaccination in pregnant women reduces the risk of hospitalization due to influenza in their infants younger than 6 months old by an average of 72%.

By getting Tdap vaccine during the third trimester of pregnancy, mothers build high levels of antibodies that transfer to the fetus and continue to protect the baby after birth, preventing more than 3 in 4 cases (78%) of whooping cough in babies under 2 months old. Tdap vaccination during pregnancy is even more effective at preventing hospitalization due to whooping cough in newborns.

“Obstetricians and midwives are on the front line of care for expectant mothers and are the most trusted source of vaccine information for their pregnant patients. We encourage them to start discussing the importance of maternal vaccination early in pregnancy, and continue vaccination discussions with their patients throughout pregnancy,” said Amanda Cohn, MD, chief medical officer in CDC’s National Center for Immunization and Respiratory Diseases.

To read more about the Burden and Prevention of Influenza and Pertussis Disease Among U.S. Pregnant Women and Infants and the entire Vital Signs report, visit: www.cdc.gov/vitalsigns

Be the first to comment on "Nearly Half of U.S. Newborns and New Moms at Risk of Flu or Pertussis Hospitalization, Death"