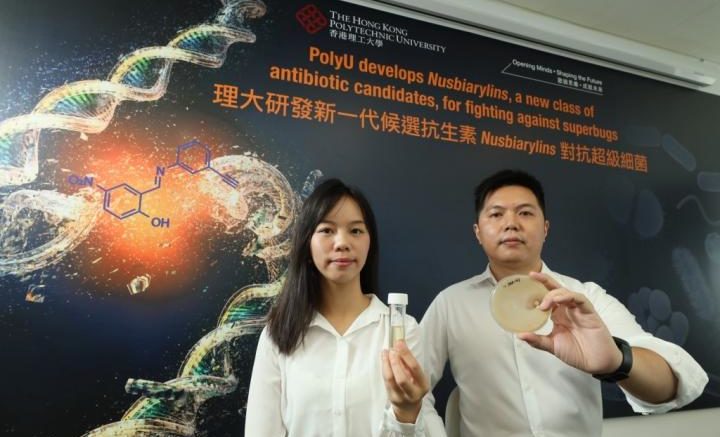 The novel small molecules, based on new target, new chemical structure and new antimicrobial mechanisms, are different from those of existing antibiotics. The new drug candidates demonstrate much effective abilities of inhibiting bacterial growth than commonly used antibiotics, yet with no toxicity to human cells.

The development of "Nusbiarylins," a new class of antimicrobial agents, by the research team of the State Key Laboratory of Chemical Biology and Drug Discovery of PolyU's Department of Applied Biology and Chemical Technology (ABCT), is a breakthrough in the battle against multidrug-resistant bacterial infections. The interdisciplinary team, led by Dr. Ma Cong, assistant professor in ABCT, is comprised of experts from both PolyU and Faculty of Medicine of the Chinese University of Hong Kong.

"Our research is now in the stage of animal studies, conducting infectious model studies and pharmacokinetic studies. These are the critical steps preceding clinical trials on human for drug development. At this moment, there are very few antibiotic related studies being able to complete such stage worldwide. Our findings so far are very promising. We believe further studies on these compounds will contribute to a new era of antibiotic discovery, contributing towards the fight against superbugs," said Ma.

Most antibiotics currently in the market fight against bacteria through disrupting its DNA synthesis or protein functions. The innovative antimicrobial mechanism developed by PolyU team focuses on inhibiting the interaction between two proteins, NusB and NusE, which is crucial for synthesis of bacterial ribosomal RNA (rRNA). By designing small molecules to disrupt NusB-NusE interaction, bacterial cell proliferation can thus be curbed.

The team developed a model basing on the structure of NusB and NusE, and applied computer-aided screening to screen about 5,000 small molecule compounds with drug-like properties to explore for inhibitors for NusB-NusE interaction. The shortlisted compounds were then put to tests for antimicrobial activity against different MRSA strains. A compound, (E)-2-{[(3-ethynylphenyl)imino]methyl}-4-nitrophenol (hereafter addressed as MC4), was identified as having much effective antibacterial abilities than the commonly used antibiotics. The Minimum Inhibitory Concentration (note: MIC denotes the lowest concentration of a chemical/drug for preventing bacterial growth) of MC4 for some MRSA strains are as low as 8 μg/mL, compared to the MICs of >64 μg/mL demonstrated by two antibiotics in the market, oxacillin and gentamicin.

Tests of MC4 on human lung and skin cells (infections caused by MRSA often occur in these tissues) indicated no significant toxicity. The fact that NusB and NusE exist only in bacteria and not human cells has also addressed toxicity concern.

The research team has further structurally modified MC4 for optimization, and 167 analogues were synthesized so far. The new class of compounds are named as "Nusbiarylins" (basing on their target protein "NusB" and their "biaryl" structure). Laboratory test of Nusbiarylins against a panel of MRSA strains proved their consistent antibacterial activity, some with MIC as low as 0.125 μg/mL, much better than commonly used antibiotics, including vancomycin with the MIC of 1 μg/mL which is labelled as the "last resort" antibiotic drug in the United States.