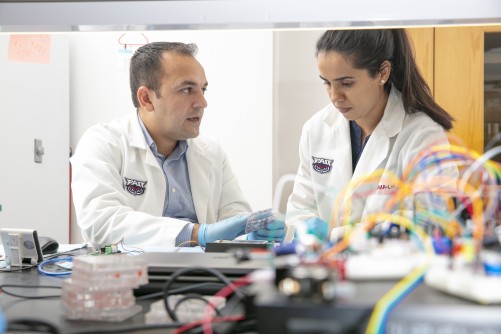 Hepatitis C affects more than 354 million people worldwide. About 75 to 85 percent of people who have it get a long-term infection referred to as chronic hepatitis C. Left untreated, it could lead to cirrhosis, liver cancer or liver failure. Each year, an estimated 1 million people die from this disease.

Despite the availability of effective therapies, only 20 percent of the population is diagnosed, and only 7 percent have received treatment within developed countries. In developing or low-income countries, where 78 to 80 percent of the worldwide cases reside, less than 1 percent receive a diagnosis and treatment.

The most accurate way to diagnose hepatitis C is with molecular testing, which should start with an antibody assay, followed by a nucleic acid test for RNA detection to confirm the initial result. However, current testing methods are time-consuming, expensive and challenging to deploy in remote and underdeveloped areas.

Researchers from Florida Atlantic University’s College of Engineering and Computer Science and collaborators, have designed a microfluidic platform that incorporates different steps that are usually performed by trained personnel in sophisticated lab settings on a single platform. The entire virus detection process is executed inside a uniquely designed, inexpensive, disposable, and self-driven microfluidic chip.

The device is user-friendly, portable and provides a visual confirmation using only a small amount of sample and few reagents. The fully automated sample-in–answer-out molecular diagnostic set-up rapidly detects hepatitis C virus in about 45 minutes. The technology uses relatively inexpensive and reusable equipment costing about $50 for sample processing and disease detection. The disposable microfluidic chip also offers shorter times for a reliable diagnosis and costs about $2.

Results of the study, published in the journal Biosensors, showed that human plasma samples spiked with hepatitis C virus particles that were tested with the device offered a high sensitivity of 500 viral copies/mL and specificity, without the need for trained technicians, expensive equipment, or facilities. The RNA-based set-up utilizes a colorimetric result readout, which is an accurate method that can be implemented in low-income areas, making it accessible to people.

“The hands-free microfluidic chip we used for the testing is easy to assemble and provides a practical approach for large-scale testing outside the laboratory,” said Waseem Asghar, PhD, senior author and an associate professor in FAU’s Department of Electrical Engineering and Computer Science. “The operating procedure of the chip is straightforward; once samples are introduced to the inlet chamber, the automated system will self-operate.”

The set-up consists of an automated disposable microfluidic chip, a small surface heater, and a reusable magnetic actuation platform. The compact microfluidic chip enables nucleic acid isolation, purification, amplification, and colorimetric detection of the amplified product. The system utilizes a dye to detect the amplification product with the naked eye. The dye changes color from orange to green in the presence of double-stranded DNA, resulting in easy analysis without the need for fluorescent imaging.

The microchip is designed with distinct shapes of chambers so that the solutions can be retained during the entire execution process. The diamond-shape chambers contain different buffers performing different tasks for optimal RNA purification. The inlet and reaction chambers are dual-purpose chambers, making the plasma processing steps less complex.

“With this molecular diagnostic set-up, the user can run multiple tests since attention is required only initially and at the end of the colorimetric analysis, which makes it ideal for application at point-of-care and in underdeveloped countries,” said Asghar.

The World Health Organization (WHO) aims to reduce the Hepatitis C infection rate by 90 percent and the mortality rate by 65 percent by 2030, compared with a 2015 baseline.

“In order to accomplish the World Health Organization’s goal of eliminating hepatitis C as a public health problem, the world needs enhanced and extensive-scale screening,” said Stella Batalama, PhD, dean, FAU College of Engineering and Computer Science. “Professor Asghar and his colleagues have developed an innovative solution for a cost-effective, rapid, and accurate point-of-care viral RNA diagnostic test to help properly manage this disease and reduce the economic burden of large-scale testing in low-to-middle-income countries.”

Study co-authors are Sandhya Sharma, PhD, an associate research scientist at Gateway Institute for Brain Research who conducted the study when she worked at FAU in the Asghar Laboratory; Emmanuel Thomas, MD, PhD, University of Miami; and Massimo Caputi, PhD, professor of biological sciences, FAU Schmidt College of Medicine.