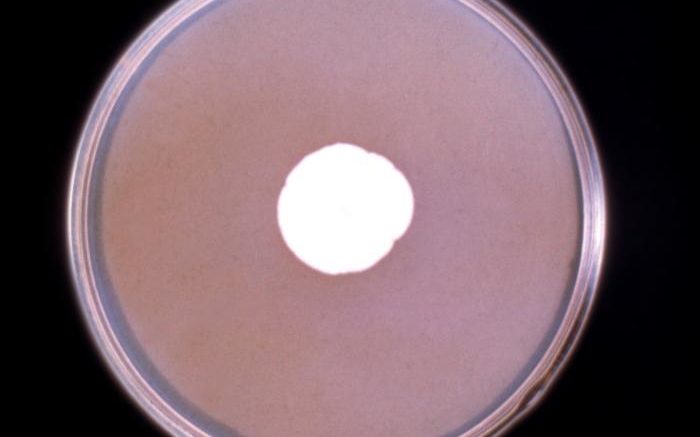 This image depicted a Petri dish culture plate, which had contained an unidentified growth medium that had been inoculated with the fungal organism, Candida albicans, and had given rise to this single, white fungal colony. Courtesy of CDC

Monash University researchers have gained insights into how nanoparticles could develop a biosensor to prevent deadly diseases contracted on medical equipment, such as catheters.
Candida albicans can become a serious problem for people who are seriously ill or immune-suppressed.
Researchers at Monash University have gained insights into how nanoparticles could be used to identify the presence of invasive and sometimes deadly microbes, and deliver targeted treatments more effectively.

This study was conducted as an interdisciplinary collaboration between microbiologists, immunologists and engineers led by Dr. Simon Corrie from Monash University's Department of Chemical Engineering and professor Ana Traven from the Monash Biomedicine Discovery Institute (BDI). It was recently published in the American Chemical Society journal ACS Applied Interfaces and Material.

Candida albicans, a commonly found microbe, can turn deadly when it colonises on devices such as catheters implanted in the human body. While commonly found in healthy people, this microbe can become a serious problem for those who are seriously ill or immune-suppressed.

The microbe forms a biofilm when it colonises using, for example, a catheter as a source of infection. It then spreads into the bloodstream to infect internal organs.

"The mortality rate in some patient populations can be as high as 30 percent to 40 percent even if you treat people. When it colonises, it's highly resistant to anti-fungal treatments," Traven said. "The idea is that if you can diagnose this infection early, then you can have a much bigger chance of treating it successfully with current anti-fungal drugs and stopping a full-blown systemic infection, but our current diagnostic methods are lacking. A biosensor to detect early stages of colonisation would be highly beneficial."

The researchers investigated the effects of organosilica nanoparticles of different sizes, concentrations and surface coatings to see whether and how they interacted with both C. albicans and with immune cells in the blood.

They found that the nanoparticles bound to fungal cells, but were non-toxic to them.

"They don't kill the microbe, but we can make an anti-fungal particle by binding them to a known anti-fungal drug," Traven said.

The researchers also demonstrated that the particles associate with neutrophils -- human white blood cells -- in a similar way as they did with C. albicans, remaining noncytotoxic toward them.

Corrie said while nanoparticles were being investigated in the treatment of cancer, the use of nanoparticle-based technologies in infectious diseases lags behind the cancer nanomedicine field, despite the great potential for new treatments and diagnostics.

"The other unique thing in this study is that rather than using cells grown in culture, we're also looking at how particles act in whole human blood and with neutrophils extracted from fresh human blood," he said.

Traven said the study had benefited greatly from interdisciplinary collaboration. "We've brought together labs with expertise in infection, microbiology and immunology with a lab that has expertise in engineering, to do state-of-the-art experiments," she said.