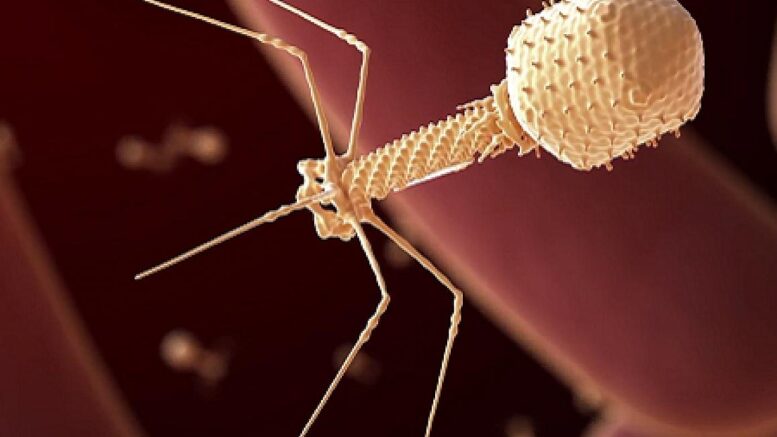 A computer-generated rendition of a bacteriophage. Courtesy of NIAID

The National Institute of Allergy and Infectious Diseases (NIAID), part of the National Institutes of Health, has awarded $2.5 million in grants to 12 institutes around the world to support research on bacteriophage therapy. These awards represent NIAID’s first series of grants focused exclusively on research on this therapy, an emerging field that could yield new ways to fight antimicrobial-resistant bacteria. A 2019 report from CDC found that antibiotic-resistant pathogens cause more than 2.8 million infections in the U.S. each year and more than 35,000 people die.

Bacteriophages (or “phages”) are viruses that can kill or incapacitate specific kinds of bacteria while leaving other bacteria and human cells unharmed. By gathering naturally-occurring phages, or by modifying or engineering phages to display certain properties, researchers hope to create novel anti-bacterial therapeutics. Because phages eliminate bacteria by infecting them, rather by generating compounds like antibiotics which kill bacteria, phages can be used to treat antibiotic-resistant infections. In addition, some evidence suggests that combination therapy containing both phages and antibiotics could prevent bacteria from becoming drug resistant.

Although scientists have been aware of phages and their ability to kill bacteria since 1917, the first U.S.-based clinical trials of phage therapy have only recently begun. Individual U.S. patients have received phage therapy, but only under emergency investigational new drug protocols. In eastern Europe, where the use of phage therapy is more prevalent, its efficacy has not been rigorously demonstrated.

“In recent decades, multidrug-resistant bacteria, particularly those that cause potentially deadly diseases like tuberculosis, have become a serious and growing global public health concern,” said NIAID director Anthony S. Fauci, MD. “With these awards, NIAID is supporting research needed to determine if phage therapy might be used in combination with antibiotics—or replace them altogether—in treating evolving antibiotic-resistant bacterial diseases.”

The new NIAID grants support research to address key knowledge gaps in the development of phages as preventative and therapeutic tools for bacterial infections. Basic research supported by these grants will include a study characterizing different types of phages; a project studying how phages combat sticky, sheet-like colonies of microorganisms called biofilms, which can be difficult to treat with antibiotics; and research to determine how to identify new, potentially useful phages. Some translational research supported by these grants will study how to exploit the interaction between phages and bacteria to create lasting, re-usable therapeutics; and engineering viruses to combat Staphylococcus bacteria.

The recipients of the awards are as follows: