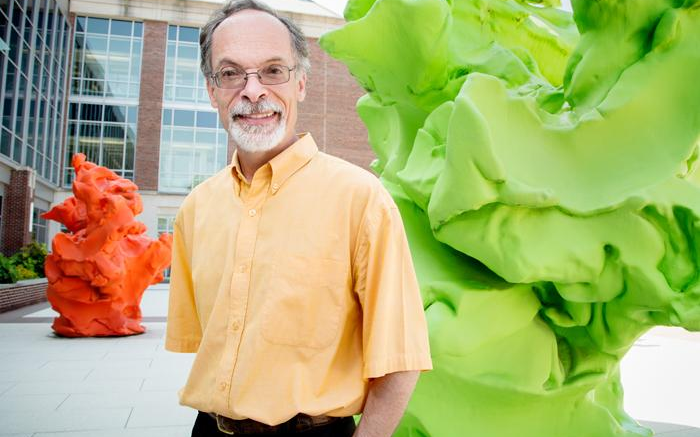 It’s no surprise that moving indoors and closing windows during winter bumps up transmission. But new analyses from University of Illinois researchers show that, underneath all the variants and waves, the disease has been cycling seasonally across the globe for nearly two years.

More significantly, the researchers identify a molecular culprit for the virus’s seasonal nature. The finding could help predict future mutations and potentially pave the way for new therapeutics or vaccines.

“Ours is the first proposal of a viral sensor that responds to external seasonal patterns of environment and physiology,” says Gustavo Caetano-Anollés, professor in the Department of Crop Sciences and the C.R. Woese Institute for Genomic Biology at the University of Illinois, and senior author on the Methods in Microbiology study. “The structure should now become a focus for prediction, mitigation, and informed public health decision-making.”

The structure, embedded within the N-terminal domain of the viral spike, falls into a broad category of proteins known as lectins. All organisms make lectins; the proteins recognize and bind to carbohydrates and shape adaptive and innate immune responses. They are also known to help viruses and other microbes attach to their host cells. But it was only recently that scientists discovered some lectins play a role in sensing temperature changes in the environment.

This is where coral reefs and COVID-19 collide.

In 2019, scientists in China found that a type of lectin – galectin – was involved in recognition between photosynthetic dinoflagellates and coral polyps. But this recognition mechanism didn’t work as well when water temperatures fell outside a narrow thermal band: 25-30 degrees Celsius. It was a first hint that galectins sense external temperatures and an explanation of coral bleaching, the devastating demise of coral reefs in warming waters.

Hearing about this discovery, Caetano-Anollés and his collaborators analyzed tens of thousands of SARS-CoV-2 genomes and discovered a galectin-like structure on the spike protein. The researchers think galectin protein structures sense external conditions and, when it’s not too hot or humid, trigger a conformational change in the spike protein of the virus, allowing viral RNA to enter host cells.

“Think of the spike as a little jar that has flaps on top to keep it closed. When temperature is high, the jar stays completely closed and cannot spill its infectious contents. But when its flaps recognize the host cell in the lung – under cool and dry conditions – the jar opens, releasing a fusion peptide that helps merge the virus and host membranes. This allows the virus to enter the cell and make more of its kind,” Caetano-Anollés says.

Viruses change constantly. When a particular part of the genome starts changing more rapidly, that’s a signal the virus is exploring new and better ways to survive and spread inside its host. In other words, rapid mutation is the virus throwing spaghetti at the wall to see what sticks.

Scientists expect these rapid mutations to arise in regions responsible for transmission, infectivity, and immune escape, because they’re the most helpful to the virus. Since sensing the environment is so important to the virus, it made sense that the galectin-like structure of the spike should also be one of those regions and that its role would be related to virus infection.

“Remarkably, we find the galectin-like structure is a frequent target of mutations because it helps the virus evade or modulate the physiological responses of the host to further its spread and survival,” Caetano-Anollés says.

Tracking mutations in the galectin protein region led the researchers to identify a seasonal pattern across the globe. Focusing on genomic changes worldwide, they found bursts of rapid mutation occurring throughout 2020, often leading to new variants of concern. The bursts were firing in parts of the globe experiencing winter or in high elevation locations where weather remains cool year-round. As for bursts during the summer, or in low-elevation tropical areas? They just weren’t happening.

Significantly, most of the seasonal bursts were occurring in the N-terminal region of the spike protein. That’s where the galectin structure is located; more evidence of its importance to the virus.

“Tracking the prevalence of mutations in this structure along the onset of the pandemic resulted in the identification of a hemisphere-dependent seasonal pattern driven by mutational bursts. These bursts are now responsible for the rise of the Variant of Concern Delta and new viral variants in the making,” Caetano-Anollés says. “Understanding how these processes of viral diversification occur is crucial for mitigations.”

Caetano-Anollés’ laboratory is now exploring the millions of viral sequences acquired worldwide to determine how genomic makeup is changing the behavior of the virus. They hope to further unravel the molecular underpinning of seasonality as COVID-19 becomes endemic.