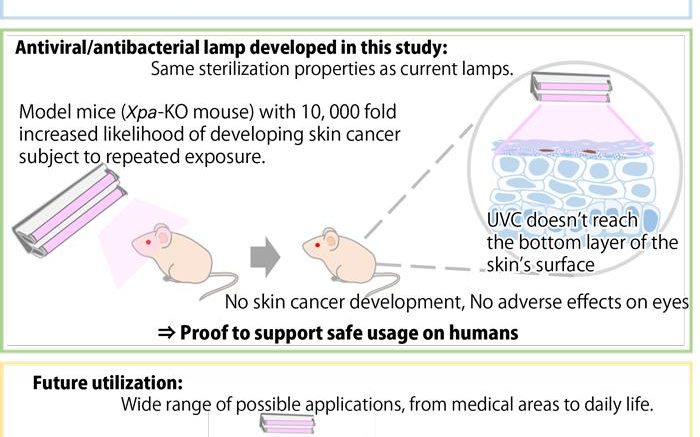 Joint research between Kobe University and Ushio Inc. has provided proof for the first time in the world that direct and repetitive illumination from 222nm ultraviolet radiation C (UVC), which is a powerful sterilizer, does not cause skin cancer. This suggests that 222nm UVC is also safe for human eyes and skin. This technology is expected to have a wide range of antibacterial and antiviral applications in medical facilities and daily life.

These research results were published online in Photochemistry & Photobiology on March 29 and Nishigori is due to present this research at the American Society of Photobiology 2020 meeting in Chicago on June 28. 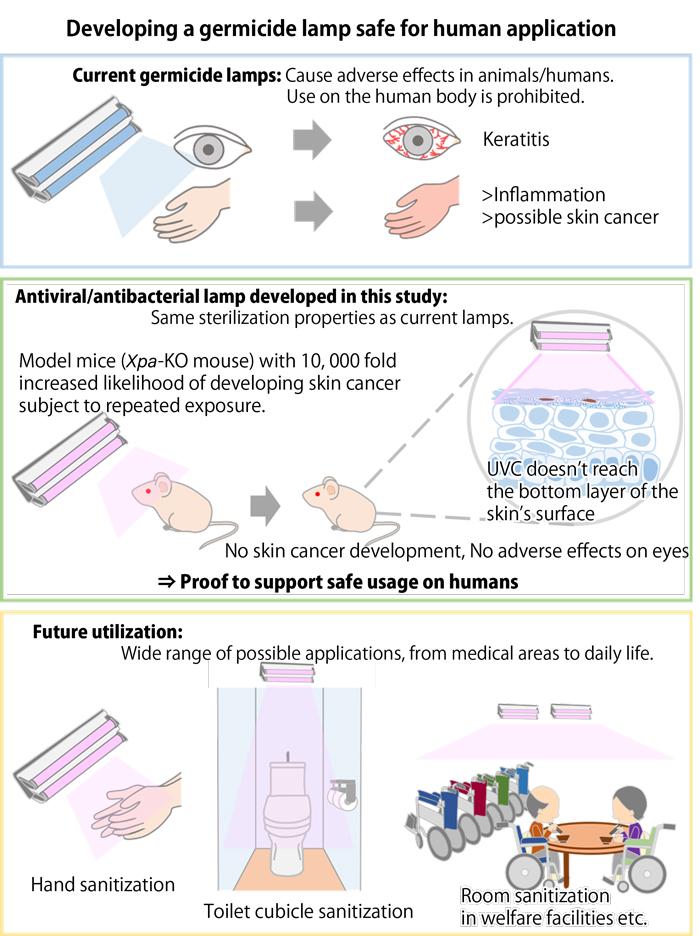 UVC emitted by the sun (with a wavelength of 280~200nm) does not reach the Earth's surface because it is absorbed by the Ozone layer. Germicide lamps that emit 254nm UVC have been developed and are utilized for sterilization because the wavelength can kill bacteria. So far these lamps are only utilized in places when people are not present because they are known to cause harmful side-effects such as skin cancer and cataracts.

The lamp used in this study has a smaller wavelength of 222nm. It is being developed in the hope that it can be utilized in the medical field. It has been shown that 222nm is comparable to 254nm, by the Division of Orthopaedic Surgery at Kobe University (Professor KURODA Ryosuke et.al.), in terms of ability to eradicate bacteria on human skin. However, if this technology is to be directly used on humans in a medical facility, it is necessary to prove that possible repeated exposure to 222nm UVC is safe and non-carcinogenic.

To evaluate the safety of repeated eye and skin exposure to a 222nm germicide lamp, xeroderma pigmentosum (*2) group A model mice were used in this study. Compared to wild-type mice, these model mice have an increased sensitivity to ultraviolet radiation and an over 10,000 fold increased risk of developing skin cancer.

In the group that was exposed to UVB (280-315nm), the wavelength range equivalent to skin cancer caused by sunlight, all mice developed skin cancer and displayed adverse effects such as cataracts and cornea damage.

Conversely, mice in the 222nm germicide lamp group did not develop skin cancer at all. The effect on their eyes was investigated in cooperation with Shimane University's Department of Ophthalmology (Masaki, et al.). There were no abnormalities visible, even when examined under a microscope (Figure 1).

It was understood that 222nm produced no adverse effects due to the level of skin penetration. The 254nm UVC currently used in germicide lamps penetrates down to the basal cell layer, the bottommost layer of the skin, and damages the DNA of cells. On the other hand, it was shown that 222nm UVC doesn't damage the DNA of skin cells because it only travels as far as the stratum corneum, the outermost layer of the skin.

These research results indicate that even though 222nm UVC is a powerful sterilizer, it can also be used directly on human skin. Beginning with hand sanitization in medical institutions, it is expected that this technology will have a wide range of antiviral and antibacterial applications in places that people enter, such as schools, welfare facilities, food factories, toilets and kitchens.

This study was funded by the Ministry of Education, Culture, Sports, Science and Technology (MEXT)'s Grants-in-Aid for Scientific Research (KAKENHI) (Grant number: JP16k10126).