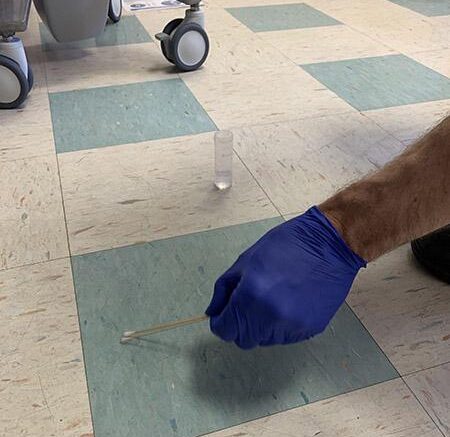 A member of the research team swabs the hospital floor to help determine where SARS-CoV-2 is, and isn't. Courtesy of UC San Diego Health Sciences

Watching what was happening around the world in early 2020, University of California San Diego School of Medicine researchers knew their region would likely soon be hit with a wave of patients with COVID-19, the infection caused by the coronavirus SARS-CoV-2. They wondered how the virus persists on surfaces, particularly in hospitals, and they knew they had only a small window of time to get started if they wanted to capture a snapshot of the "before" situation -- before patients with the infection were admitted.

After a call late one Sunday night, a team assembled in the hospital lobby the next day, ready to swab.

In the resulting study, described June 8, 2021 in Microbiome, researchers swabbed patient room surfaces before, during and after occupancy, and repeatedly collected samples from the skin, noses and stool of COVID-19 patients and their healthcare workers over time. In total, they tested 972 hospital-associated samples for traces of SARS-CoV-2 over two months.

"Although it feels like we've been living with this virus for a long time, the study of the interactions between SARS-CoV-2 and other microbes is still new, and we still have a lot of questions," said co-senior author Sarah Allard, PhD, assistant project scientist at UC San Diego School of Medicine and Scripps Institution of Oceanography. "The more we know about how a virus interacts with its environment, the better we can understand how it's transmitted and how we might best disrupt transmission to prevent and treat the disease."

Their findings: The virus, or at least its genetic signature, abounds. The team detected the virus on the floors next to the beds of patients with COVID-19 (39 percent of samples tested), floors outside patient rooms (29 percent) and surfaces inside the rooms (16 percent). SARS-CoV-2 detection tended to be highest during the first five days after a patient's onset of symptoms.

The researchers are quick to point out that just because they can detect the virus' unique genetic signatures on a surface, it doesn't mean the virus is able to infect people. Since they started the study, it has been well documented that SARS-CoV-2 spreads primarily through close human interactions, while surface transmission is likely very rare. What's more, none of the health care workers actively caring for patients in the study tested positive for the virus. The study focused on one hospital, but the researchers expect they would find similar results in any hospital treating patients with COVID-19.

"This is huge on so many levels," said co-senior author Daniel Sweeney, MD, a critical care and infectious disease physician at UC San Diego Health. "We need to know if our personal protective equipment (PPE) is adequate, and fortunately we know now that things like masks, gloves, gowns and face shields really do work. This pandemic has been a global disaster, but it could've been even worse if our healthcare workers were getting infected, especially if we didn't know why." 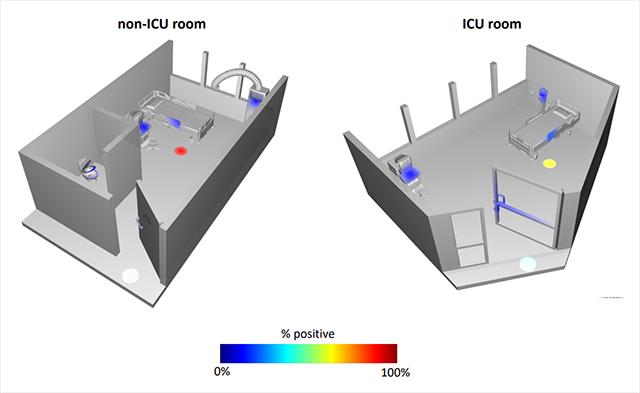 This schematic shows some of the location where SARS-CoV-2's genetic signature was detected in the intensive care unit (ICU) and other hospital rooms. Courtesy of UC San Diego Health Sciences

Viruses don't typically hang out alone. Whether on people or surfaces, they are part of complex communities known as microbiomes, which may include a variety of other viruses, bacteria and additional microbes. In looking for the coronavirus, the team discovered something else: one particular type of bacteria from the genus Rothia was found alongside SARS-CoV-2 more often than not, regardless of collection site. In other words, the presence of Rothia strongly predicted that they would also detect SARS-CoV-2 in the same sample.

"Why that relationship?" asked Allard. "Does the bacteria help the virus survive, or vice versa? Or is it just that these bacteria are associated with the underlying medical conditions that put patients at higher risk for severe COVID-19 in the first place? That's an area for future research."

The study was a challenge from the beginning, and became more difficult as the hospital's intensive care unit began to take in more patients with COVID-19. The team specifically designed their approach to leverage existing resources to not stress the supply chain needed for clinical care and testing. In a separate effort, some of the team and their colleagues developed alternative swabs for research purposes. They collected samples as quickly and as efficiently as possible to minimize disruption to patient care. The samples were transported back to the lab in alcohol, preserving the virus for analysis but not exposing researchers to active organisms.

"A lot of people did a lot of basic and clinical research these last few months, and we did it well," Sweeney said. "We added to our infrastructure. We acquired the experience. I hope the same sort of focus, drive and spirit carry forward in whatever comes next."