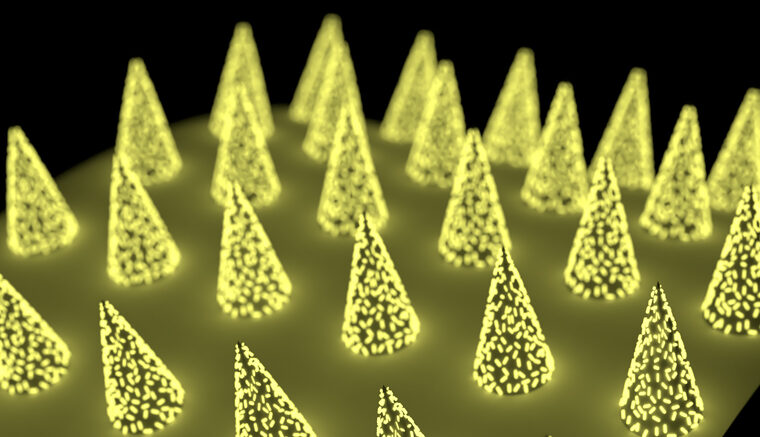 Engineers at the McKelvey School of Engineering at Washington University in St. Louis have developed a microneedle patch that can be applied to the skin, capture a biomarker of interest from interstitial fluid and, thanks to its unprecedented sensitivity, allow clinicians to detect its presence.

Oftentimes, doctors use blood samples to check for biomarkers of disease: antibodies that signal a viral or bacterial infection, such as SARS-CoV-2, the virus responsible for COVID-19, or cytokines indicative of inflammation seen in conditions such as rheumatoid arthritis and sepsis. These biomarkers aren’t just in blood, though. They can also be found in the dense liquid medium that surrounds our cells, but in a low abundance that makes it difficult to be detected.

Engineers at the McKelvey School of Engineering at Washington University in St. Louis have developed a microneedle patch that can be applied to the skin, capture a biomarker of interest and, thanks to its unprecedented sensitivity, allow clinicians to detect its presence.

The technology is low cost, easy for a clinician or patients themselves to use, and could eliminate the need for a trip to the hospital just for a blood draw.

The research, from the lab of Srikanth Singamaneni, the Lilyan & E. Lisle Hughes Professor in the Department of Mechanical Engineering & Material Sciences, was published online Jan. 22 in the journal Nature Biomedical Engineering.

In addition to the low cost and ease of use, these microneedle patches have another advantage over blood draws, perhaps the most important feature for some: “They are nearly pain-free,” Singamaneni said.

Finding a biomarker using these microneedle patches is similar to blood testing. But instead of using a solution to find and quantify the biomarker in blood, the microneedles directly capture it from the liquid that surrounds our cells in skin, which is called dermal interstitial fluid (ISF). Once the biomarkers have been captured, they’re detected in the same way — using fluorescence to indicate their presence and quantity.

ISF is a rich source of biomolecules, densely packed with everything from neurotransmitters to cellular waste. However, to analyze biomarkers in ISF, conventional method generally requires extraction of ISF from skin. This method is difficult and usually the amount of ISF that can be obtained is not sufficient for analysis. That has been a major hurdle for developing microneedle-based biosensing technology.

Another method involves direct capture of the biomarker in ISF without having to extract ISF. Like showing up to a packed concert and trying to make your way up front, the biomarker has to maneuver through a crowded, dynamic soup of ISF before reaching the microneedle in the skin tissue. Under such conditions, being able to capture enough of the biomarker to see using the traditional assay isn’t easy.

But the team has a secret weapon of sorts: “plasmonic-fluors,” an ultrabright fluorescence nanolabel. Compared with traditional fluorescent labels, when an assay was done on microneedle patch using plasmonic-fluor, the signal of target protein biomarkers shined about 1,400 times as bright and become detectable even when they are present at low concentrations.

“Previously, concentrations of a biomarker had to be on the order of a few micrograms per milliliter of fluid,” said Zheyu (Ryan) Wang, a graduate student in the Singamaneni lab and one of the lead authors of the paper. That’s far beyond the real-world physiological range. But using plasmonic-fluor, the research team was able to detect biomarkers on the order of picograms per milliliter.

These patches have a host of qualities that can make a real impact on medicine, patient care and research.

They would allow providers to monitor biomarkers over time, particularly important when it comes to understanding how immunity plays out in new diseases.

Current candidates for such a vaccine don’t confer long-lasting results; they require frequent boosting. Singamaneni and Rudra wanted a better way to determine when the effects of the vaccine had waned. “We’ve shown that we can use the patches to understand whether a person is still producing the necessary antibodies,” Singamaneni said. “No blood draw necessary.”

For example, researchers working on COVID-19 vaccines need to know if people are producing the right antibodies and for how long. “Let’s put a patch on,” Singamaneni said, “and let’s see whether the person has antibodies against COVID-19 and at what level.”

Or, in an emergency, “When someone complains of chest pain and they are being taken to the hospital in an ambulance, we’re hoping right then and there, the patch can be applied,” said Jingyi Luan, a student who recently graduated from the Singamaneni lab and one of the lead authors of the paper. Instead of having to get to the hospital and have blood drawn, EMTs could use a microneedle patch to test for troponin, the biomarker that indicates myocardial infarction.

For people with chronic conditions that require regular monitoring, microneedle patches could eliminate unnecessary trips to the hospital, saving money, time and discomfort — a lot of discomfort.

The patches are almost pain-free. “They go about 400 microns deep into the dermal tissue,” Singamaneni said. “They don’t even touch sensory nerves.”

In the lab, using this technology could limit the number of animals needed for research. Sometimes research necessitates several measurements in succession to capture the ebb and flow of biomarkers — for example, to monitor the progression of sepsis. Sometimes, that means a lot of small animals.

“We could significantly lower the number of animals required for such studies,” Singamaneni said.

Singamaneni and Erica L. Scheller, assistant professor of Medicine in the Division of Bone and Mineral Disease at the School of Medicine, worked together to investigate the concentration of biomarkers in local tissues. Current approaches for such evaluation require the isolation of local tissues and do not allow successive and continuous inspection. Singamaneni and Scheller are developing a better platform to achieve long term monitoring of local biomarker concentration.

The implications are vast — and Singamaneni’s lab wants to make sure they are all explored.

There is a lot of work to do, he said: “We’ll have to determine clinical cutoffs,” that is, the range of biomarker in ISF that corresponds to a normal vs. abnormal level. “We’ll have to determine what levels of biomarker are normal, what levels are pathological.” And his research group is working on delivery methods for long distances and harsh conditions, providing options for improving rural healthcare.

“But we don’t have to do all of this ourselves,” Singamaneni said. Instead, the technology will be available to experts in different areas of medicine. We have created a platform technology that anyone can use,” he said. “And they can use it to find their own biomarker of interest.”