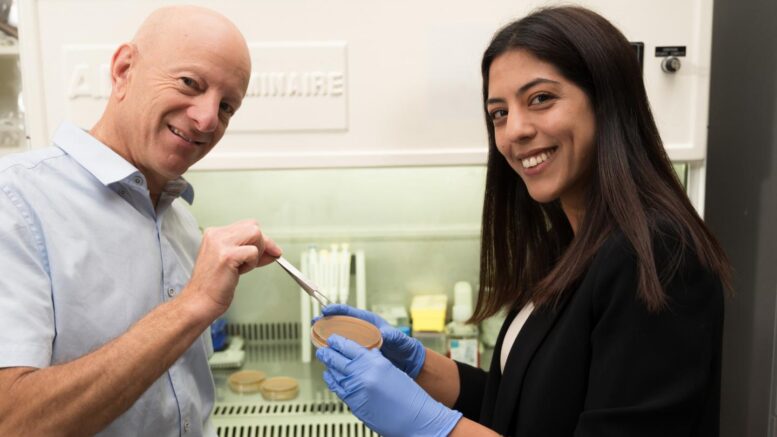 Researchers from Ben-Gurion University (BGU), together with American and German colleagues, have developed new "molecular tweezers" to combat antibiotic-resistant bacteria. Their recently announced findings were published in Cell Chemical Biology.

For years, medical professionals have struggled with bacterial infections becoming increasingly resistant to antibiotics. These molecular tweezers may be the key to battling one of greatest public health issues of the 21st century.

"Our discovery prevents infection without building up antibiotic resistance, and it might even be preferable to develop treatments based on molecular tweezers rather than antibiotics," said BGU Department of Chemistry professor Raz Jelinek.

The research team, led by Jelinek and his PhD student Ravit Malishev, tested their molecular tweezers on Staphylococcus aureus (Staph) bacteria. In the U.S. staph infections have an estimated mortality rate of more than 25%, and 40% for drug-resistant strains.

The tweezers target biofilm, a thin layer of fibers that protects the bacteria. By gripping the fibers and destroying the protective layer, the tweezers impair the bacteria without directly attacking it, which prevents resistance from occurring.

Jelinek, who is also BGU's vice president of research and development and a member of the Ilse Katz Institute for Nanoscale Science and Technology, explained, "The tweezers are just like your home tweezers but a million times smaller, and instead of plucking hairs they attack fibers of the bacteria's biofilm." By doing that they break the biofilm, making it more vulnerable to human immune defenses and external substances that are used against bacteria like antibiotics."

"The success of the study indicates an innovative direction of antibiotic treatments against pathogenic bacteria. We found that binding the tweezers to the biofilm disrupts its protective capabilities. Consequently, the bacterial pathogens become, less virulent to the human body, and, more vulnerable to elimination by the immune system. This breakthrough may open up new ways to fight antibiotic-resistant bacteria."

Jelinek hopes that following further testing, a pill containing millions of "swallowable tweezers" could identify biofilms in the body and break them apart.